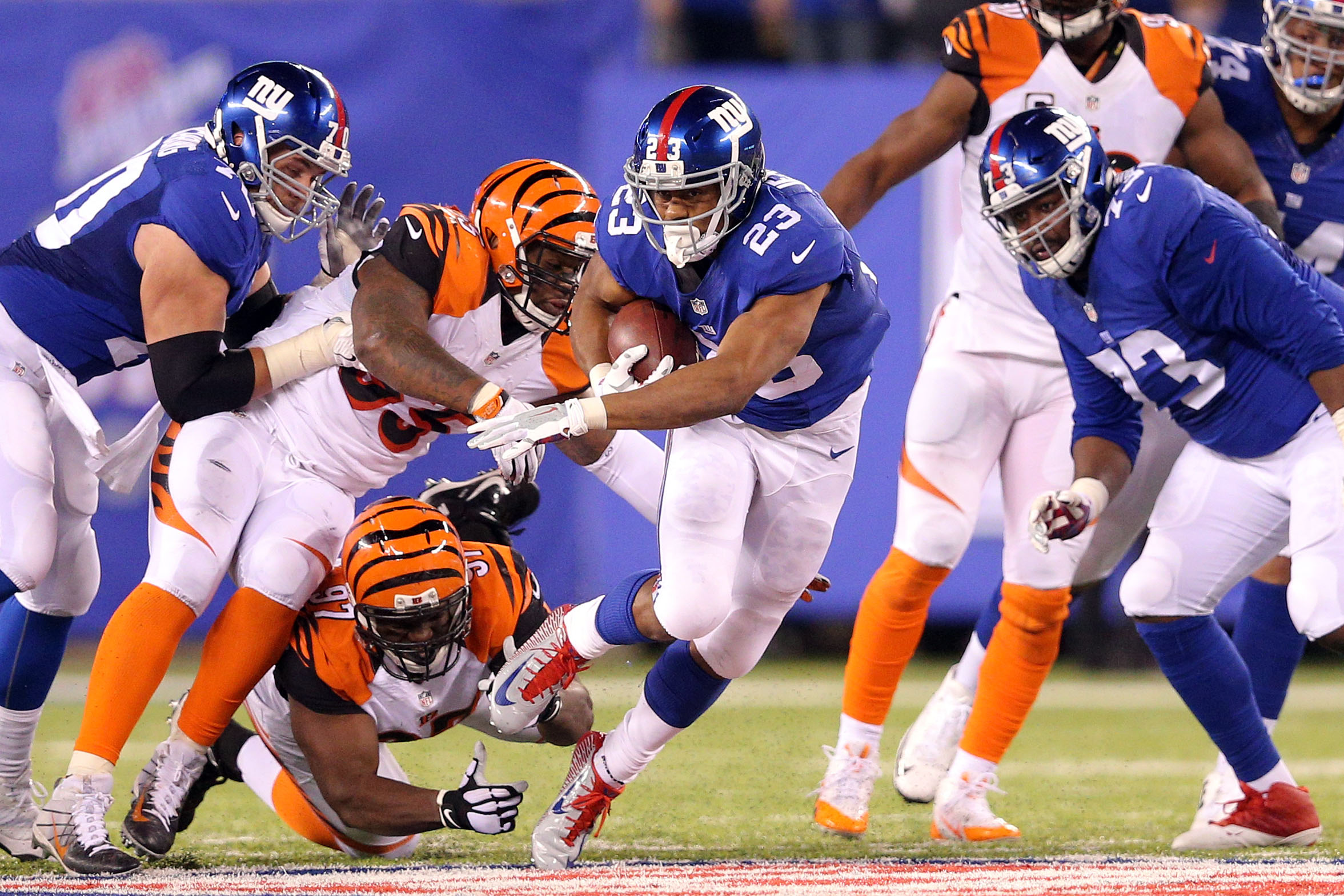 TAMING THE BENGAL IN THE RING OF HONOR

The New York Giants have had a busy week already and a lot of the news has nothing to do with the game on Monday night. This week the Giants honor three legends Ernie Accorsie, former head coach Tom Coughlin and Justin Tuck by placing them in the Ring of Honor at Metlife stadium. The Ceremony will be held at halftime of Monday nights game against Bengals on ESPN TV.

When discussing the honor on Tuesday with reporters, Justin Tuck remains humble about the honor. “The first thing I think of is, ‘How did Justin Tuck get up on the level with all those great names up there?’ The first thing I think of is all the great players and coaches that helped me along the way. When I see Justin Tuck in the Ring of Honor, the first thing I’ll always think about is all of those faces. All of those guys that went to battle every Sunday with me and helped me along the way. It’s a tremendous honor. I’m very thankful to be thought of in the perspective of the Giant greats, considering the company that I’ll be immortalized with. I never thought of it growing up that you’d walk in the stadium and see Justin Tuck’s name up there. I’m still at a loss of words for it. I know that that night will obviously bring a lot of emotions and a lot of thoughts, considering the fact that I might be one of the only people that didn’t think I’d ever be up there. Obviously, very humbled and thankful.”

Ernie Accorsi was the man responsible for bringing Eli Manning to the Giants and he reflected on the big trade on Tuesday with reporters.

“You hope that, especially at that position. I still feel that it’s the most influential position in football, and probably in sports. Maybe the Wilt Chamberlain, Bill Russel, Kareem Abdul-Jabbar era, when the center dominated so much, was just as important. You make that trade, you do something like that, to win championships. That’s the only reason you make a trade like that, and you’re in a position so many times that you have to get a get-by guy, or you have to wait and do the best you can and pick up people to stay competitive. But, the blessing for us, which was not a blessing when we went through it, was the 2003 season. If we wouldn’t have gotten to the fourth spot (in the draft), God only knows what we would have had to give up to get up there. There were three quarterbacks up there, so we could have had a shot at one of the other ones besides Eli. If we didn’t make the trade, I felt fairly confident that we would have been able to get Ben Roethlisberger, but you never know. When we picked Eli, we picked him to win championships. That’s what you hope for and to see it happen, of course, just makes you feel great. I remember my son was a coach, he coached at Virginia and Maryland, and he sat with me at that first Super Bowl and I remember I said, ‘Well if he is what we thought he was going to be, he’s going to do it right now.’ Because you never know, because maybe you’re never going to get that position again and he did it. He had some help, but he did it. . “

Tom Coughlin is the third member of the ring of honor ceremony on Monday and again expressed how much love he has for the Giants organization. “It is a great honor. I am very appreciative of the fact that the New York Giants have chosen to add my family name to the Ring of Honor which is, as I mentioned historically and I do really appreciate history and understand where I came from and so on and so forth. But to have the family name along with the 42 great names of what is being recognized as the finest Giants of all-time is of real significance to me and I think back to my mother, God bless her when I was named the Head Coach of the New York Giants, she was very sick at the time and I had an opportunity to get up to central New York to see her on occasion and I can remember her saying, ‘Thank God for the Giants.’ That is kind of the way I think she would feel today and the way that our family will feel because we will have a great representation on Monday Night and we will look forward along with Ernie (Accorsi) and Justin (Tuck) to being recognized as most recent members of that prestigious group and I took a look at those 45 names. 25 of those people that are on that list, I have known personally and for me also to keep this in the family is a wonderful thing because as you know, Chris Snee was inducted in 2015, so it is another something in addition to two Super Bowls, having been at Boston College a couple of different times – nevertheless both having come from there, Kate (Snee) being involved, Judy (Coughlin) being involved and calling this certainly something that our family can be certainly proud of.

Another week, another amazing game for Odell Beckham JR. Beckham got his first win against the Eagles on his birthday. “I couldn’t get a better present. My teammates, my coaches, this is everything you needed to cap off, or start the weekend. It was a great win we had tonight. We fought for it. Even at times when it looked like they still could win the game, we fought for it.”

Odell finished with four catches for 46 yards and two touchdown receptions. That sounds like a great birthday present to all.

Eli Manning had yet another amazing game against the Eagles as he was 22 for 36 for 257 yards and connected on four touchdown passes. After the game Eli described the feeling of finally beating the Eagles. “Definitely a big win in the division. Philadelphia, the last few years has had our number. We’ve played close games but haven’t been able to win those close games, so to be able to pull it off today and get that win was nice. “

While meeting with the media on Wednesday, Eli discussed Monday nights game against the Bengals “It’s a big game for us against a good team. They’ve been a playoff team the last few years. Their offense can score points and their defense has some veterans. A lot of experienced and really good players. We just have to make sure we play sharp, go out there, have fun and continue to make some plays.”

All Collins, All the time:

Landon Collins became the first Giants player to win player of the week awards in consecutive games. Collins has three interceptions in the last two games after getting one in his first 22 games. When asked about the honor Collins was humble. “It is a relief, it is a blessing and it shows that your dedication and your hard work is being shown and showcased.”