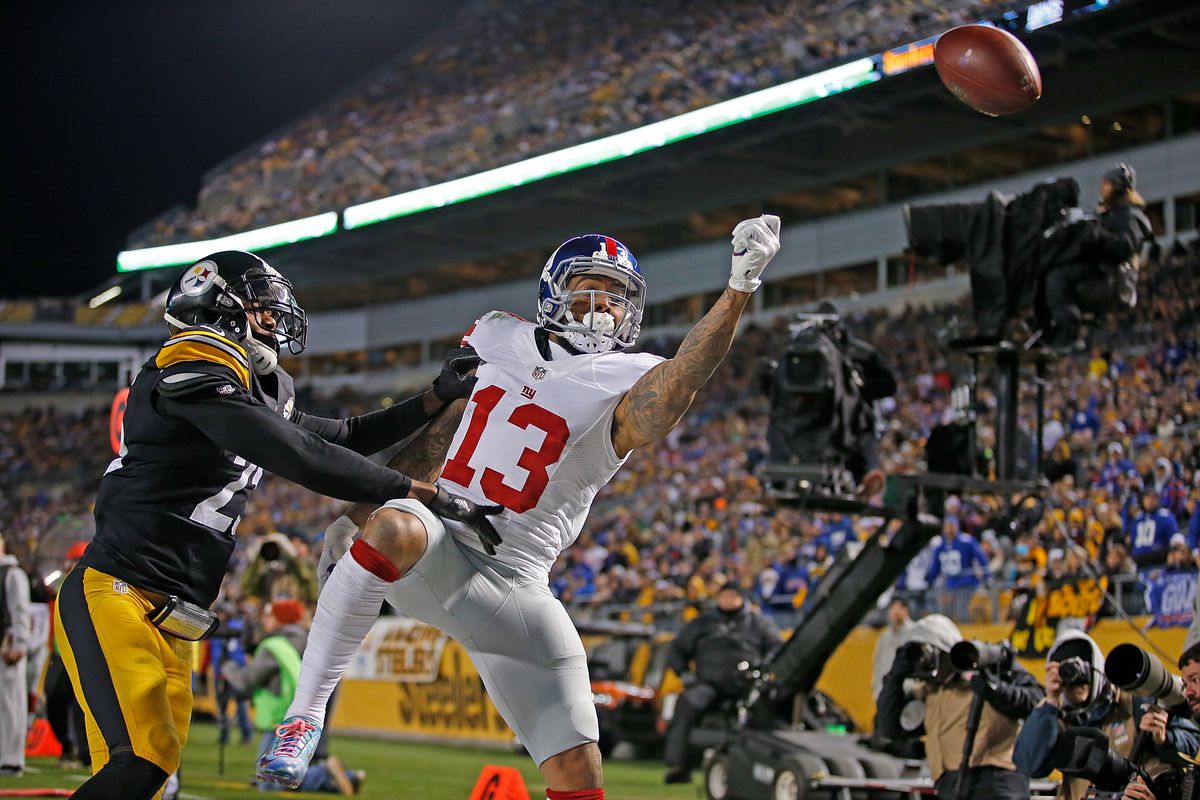 Big game this week for Big Blue as the 8-3 Giants head into Pittsburgh to play the 6-3 Steelers. The last regular season meeting between these teams saw the Steelers win 24-20 on 11/4 /12 at Metlife stadium. Roethlisberger completed 21-30 passes for 216 yards with two touchdowns and no interceptions. Eli had a rough day as he only completed 10 of 24 for 125 yards and no touchdowns and one interception

Both Quarterbacks were drafted in the 2004 NFL Draft and have two Superbowl rings a piece. Big Ben spoke with the New York media on Tuesday and discussed almost becoming a member of the Giants. “Well, my college coach who has since passed, Coach Terry Hoeppner, was with me and I think he was having talks with Mr. Accorsi or whoever and he had kind of had the same feelings and thoughts and it is still a famous – I laugh when I see the footage of when the Giants took their pick and he throws a water bottle across the table because he was upset because he thought he had some inside information. But yeah, we really thought that it was a possibility, but everything works out for a reason.”

Big Ben has a lot of respect for Eli Manning but the two are not close buddies as he explained “I would say that it is cordial. I don’t have his number, we don’t text or call, but I have the utmost respect for him and if I saw him on a golf course or on the street, we obviously would talk and I would have no problem having dinner with him.”

Giants Head Coach Ben McAdoo praised the Steelers during his media session this week. “We are playing one of the premier offenses in the league. Ben looks like he’s back to full strength. They have a wealth of play makers around them. Antonio Brown, Le’Veon Bell, Maurkice Pouncey, David DeCastro, they’re among the best in the league at their positions. The system is in the bricks there. I think they’ve been in the same system since 1992 or around that time. Again, tremendous defense, a history there, it’s in the bricks.

“Defensively, they’re young and have some experienced leaders in the group. They’re confident and they’re playing at a high level. Stephon Tuitt has done a nice job for them upfront. They’re loaded at the linebacker spot, inside and outside, like they typically are with James Harrison, Lawrence Timmons, Ryan Shazier and company. They have an athletic secondary led by physical, hard-hitting safety, Mitchell.

Another great week by Odell Beckham as he had six catches for 96 yards and two touchdown receptions against the Browns. Odell continues to be one of the most compelling stars in the game today. He met with the media this past week and discussed the comparison to Antonio Brown of the Steelers.

“Yes. I think we both like to score and we like to have fun. We like to enjoy it out there. You work really hard. I don’t think people really take in what you sacrifice each and every day to go out there and play for just 60 minutes. That’s really all you get and you don’t even get that. Like to enjoy it and have fun. I definitely think there are similarities in our game though. I watch a lot of film on him and probably stole a lot of stuff from him to make it my own.”

Eli had a great week against the Browns as he connect on 15 of 27 passes with three touchdown passes. While he had another brilliant week, the focus at practice became on Eli’s brother Peyton coming by Giants practice. Why was he there? Eli explained

“It was good to have him here. I hadn’t seen him in a while. He has something to do tomorrow so he popped in and sat in on a few meetings with us today. Just good to catch up. I’ll get some time with him later on. I think he’s doing well. He seems to be staying busy and enjoying the down time. I think when he gets in this environment, he was kind of drilling the coaches his own questions. I know he liked being in there and doing a little install on Pittsburgh. I’m sure he misses that environment. Just the game plan, how you’re going to do things, how you’re going to deal with protections, how you’re going to pick things up. Just really getting back into that flow of things, I’m sure, is a little reminder of how special it is to be in this situation.”

The Return of the Third Back:

Shane Vareen returned to practice this week and might e ready to go against Dallas next week. Vareen addressed reporters to discuss his condition. “The injury was a surprise because I knew I had hurt my arm, but I didn’t think it was that bad. So just trying to cope with the injury, I never really put a time table on it because I didn’t know how bad it was. I didn’t know what the surgery was going to be. I had never gone through something like that before and it is kind of a rare injury, so I wasn’t too sure. I was just hoping for the best and we didn’t know for sure if there was even going to be a chance until after surgery, so luckily we had some good news.”