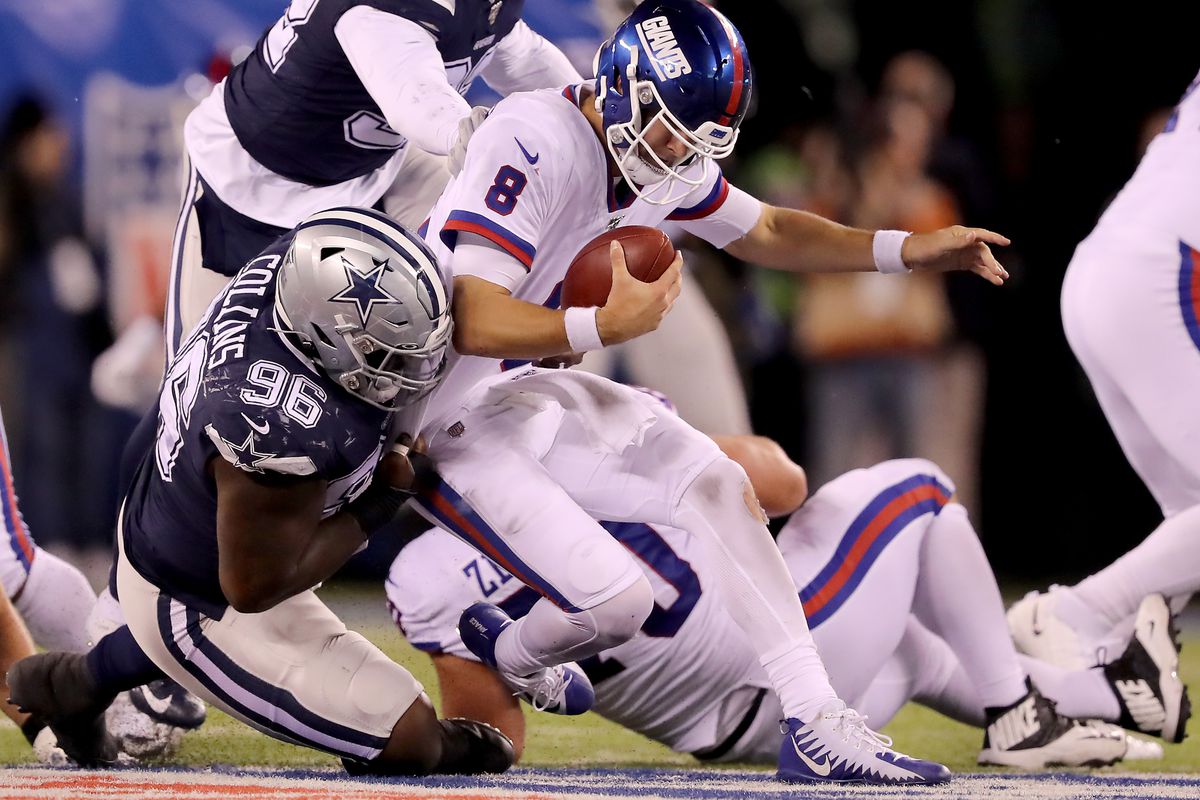 The Giants and Cowboys returned to Monday Football for the 11th time and for the viewing audience, the game did not disappoint. Sadly, the home team fans and player walked out of the stadium walked out scratching their saying it could be worse.

When you look at how the game progressed through the first half, the general feeling was that the Cowboys were going to struggle as they did their previous visit earlier in the against the New York Jets.

Sadly that did not come true as the Giants fell and fell hard to the Cowboys 37-18. The Giants kept it close in the first half but blown defensive assignments, poor adjustments, and mental lapses gave the Cowboys the opportunity to run away with the game.

The Giants started strong with an interception to start the game which put their offense in great position on the eight yard line. Which lead to a Giants field goal and an early lead.

“I think we started better than we had in previous weeks, but we still missed a couple of opportunities to score touchdowns when we had the ball down there” said QB Daniel Jones.

Jones who struggled through the whole night, was 26/41 one touchdown, one interception with two fumbles and was sacked twice. This was the first opportunity for Jones not only to join the rivalry against Dallas but on Monday Night Football as well.

The only Giants touchdown was set up by a beautiful catch by Golden Tate from Jones which eventually led to a one yard pass to Cody Latimer. The touchdown gave the big blue a 12-3 three advantage.

“It was against a really, really good cornerback” said Tate on the pass by Jones. “Savvy guy, long guy who had a decent release and DJ [Daniel Jones] just placed a great ball where only I can catch it and you know, it was the spark I thought that we needed, that helped us and a few plays later we were able to score and I’m just thankful for the opportunity to be able to make a play, help our team.”

The Giants kept it close as it was a one point game at the half 13-12. As the half went on the Giants little mental mistakes were coming back to hunt them after leading for majority game up to that point.

The Cowboys hit the go ahead field goal right at the end of the first half to take the lead and never looked back.

The big story of the first half was the black cat on the field during the drive which slowed down the Giants.

Many of the players from both sides reacted for the cat’s antics during this rivalry.

“I was just wondering who was going to catch the thing, I wasn’t getting close to it” Cowboys QB Dak Prescott joked with the media afterwards. “I’m not superstitious or anything, but I wasn’t getting near it. Thankfully we got that thing out of the stadium and were able to get back to the game.”

“You know I was kind of happy about it (the cat)” Said WR Amari Cooper. It was around the time my knee was hurting so I had a little bit more time to get this thing right.”

During the second half the train went off the rails for the Giants between turnovers from Jones, missed tackles that led to an Amari Cooper touchdown, and multiple unnecessary penalties which led to a 19 point defeat for New York.

After the game, Golden Tate expressed his frustration to the media by stating the team has not played their best especially on the big stage. The team had to close out more.

“Obviously you’re feeling that, but I just feel like talking about tonight” Tate explained. “We played extremely undisciplined football. It’s hard enough to win in this League, but when you’re doing, I guess, knuckleheaded things, it certainly didn’t work in your favor. We’ve just got to play a smart team. You look at this game going into halftime we were up—at one point we were up.”

Tate Continued. “You know, I guess a minute to go, they catch a drag route at the sideline to score. Okay, fine. We come back and they’re ready to get on the field and we pretty much go two plays and throw a pick to them and they run it back into decent field position, they kick a field goal, and all of a sudden they’re up by one. That’s a halftime swing that definitely worked against us. We come back out—did we go three and out? I don’t know what happened, but we didn’t move the ball the way we expected, still, still in the game and then from there I think things just kind of snowballed, you know, and kind of shot ourselves in the foot, but still we were still in the game, we still have a chance. I think it might have been one score at one point or maybe six points or eight points, we still have a chance, and we make another mistake and it’s just we cannot do that.”

Saquon Barkley continued his struggles against the Cowboys as he tied his career low 28 yards on 14 carries. Jones found Barkley for a 65 yard reception in the 2nd half which he almost took to the house.

His previous career lows are against the Dallas Cowboys as well. The previous numbers were set last year in Dallas in a loss on Sunday Night Football.

We have plenty of Coverage here on BSP of The Cowboys -Giants game through out the day!