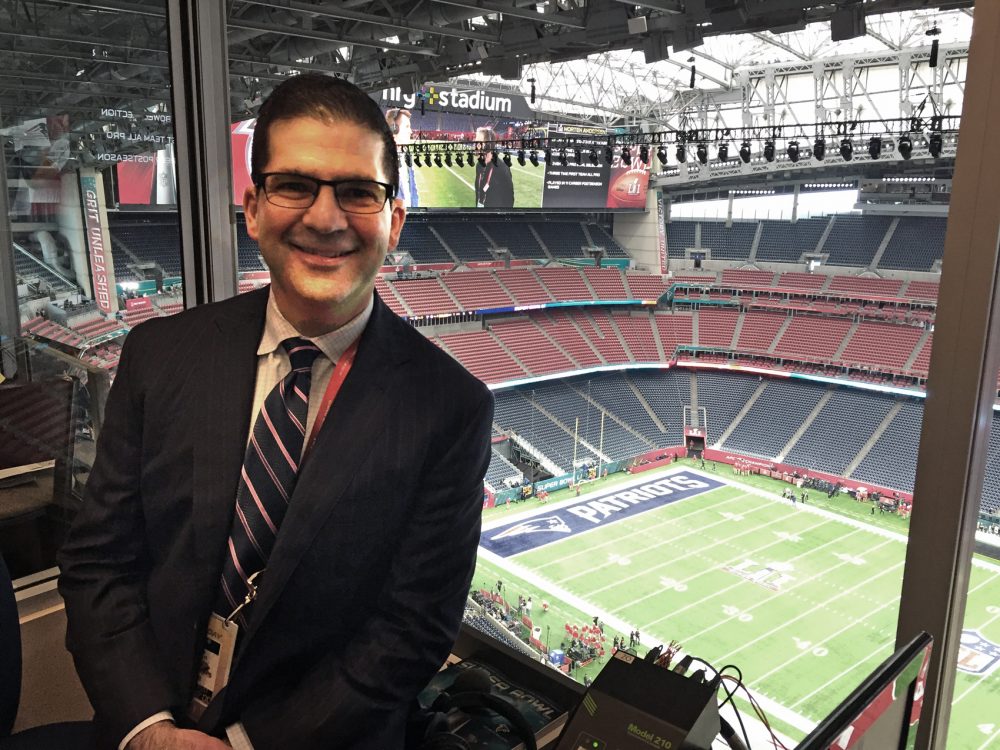 From the 2013 New England Patriots season that came to a disappointing end with a loss in the AFC Championship Game against the Denver Broncos, to the win in Super Bowl 53 over the Los Angeles Rams, and everything in between, including two historic Super Bowls, 49 and 51. There is only one voice that Patriots fans want to hear calling the play-by-play, and that is Bob Socci.

Socci has been doing play-by-play since 1993, however his career really started to take off when he joined the United States Naval Academy as the play-by-play voice for their basketball team in 1997, and later on calling play-by-play for the football team.

“I was the voice of Delmarva, I was calling class-A baseball, and I heard Navy needed a part time basketball fill-in. I was lucky enough to get that opportunity.” Socci told Back Sports Page, when asked which opportunity gave him the most knowledge of play-by-play. “They liked me, they liked what they heard for about seven or eight games. After the year was over, Navy decided that they wanted to create a ‘Voice of Navy Athletics’ position. The athletic director and his assistant asked if I was interested, I said ‘Absolutely.’”

In November 1997, Socci had the opportunity to replace Steve Buckhantz, who was hired for the Washington Wizards play-by-play, and he began calling Navy Football.

“My first game was Navy vs Notre Dame,” said Socci. “Navy hadn’t beaten Notre Dame since 1963. The game ended on a Hail Mary for Navy the ball gets tipped and caught inside the two-yard line, and the receiver gets pushed out-of-bounds, about a step and a half away from a touchdown that would’ve won it. And that led to 15 years of calling Navy football.”

Socci reflects on his time calling Navy football as one of his “most rewarding” moments in his life. Having been able to call Navy beating Notre Dame three times, one of which included a triple overtime that snapped a 43-game losing streak to Notre Dame. Socci also got to call 16 Army vs Navy games.

After meeting his wife, and moving with her back to Boston, Socci began “knocking on doors” almost immediately. Before 98.5 The Sports Hub launched in 2009, Socci reached out to Gil Santos, the former voice of the Patriots, for some advice.

“I had reached out to Gil Santos, and asked him to listen to some of my football takes,” said Socci. “Gil, the voice of the Pats for 36 season had some criticisms, but he had a lot of compliments too. That gave me a lot of confidence that I could broadcast at the next level.”

“All I wanted was a part-time job, I would’ve taken any job they offered. Just to get my foot in the door for a year. And nothing came of it, at least at the time. I left a CD sample of my football play-by-play.” said Socci. “I did not hear from them until December 2012, almost the New Year, right before the regular season finale. I got an email from someone at the station informing me that Rick Radzik, the assistant program director, at the time, had recommended me for the job. I was completely blown away.”

After joining The Sports Hub in 2013, and taking over as the Patriots play-by-play voice, Socci got to experience some of the most exciting moments in not only Patriots history, but NFL history.

“I’ve been so lucky. I’ve been to four Super Bowls, called three wins, all of which were dramatic victories,” said Socci when reflecting on some of the more exciting moments of his career. “Including the two greatest comebacks in Super Bowl history. You know, the Seahawks on the verge of a win and Malcom Butler with the interception. Then of course, the Patriots being down 28-3 and winning the first ever overtime Super Bowl.”

Socci knew that he was following in a legend’s footsteps when taking over for Santos as the voice for the Patriots.

“I was getting the chance to broadcast games with the greatest coach and greatest quarterback in my mind, in the history of football,” said Socci. “And in many respects, the greatest tight end, as well. It was a very humbling experience, I think it is part of my good fortune and trying to gain acceptance, that the hometown broadcast sounds better when the home team wins, and the Patriots win a lot as the home team.”

The Patriots as a whole are going to look a lot different this upcoming season, with Cam Newton in the running for the starting quarterback position that was left open with Tom Brady’s departure to Tampa Bay, one thing will remain the same, and that is Socci’s voice every Sunday. Socci has experienced quite a few historic moments for the team, and has the chance to see many more.