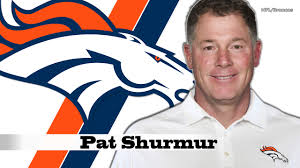 “Pat is an established play-caller with significant experience leading an offense as both a coordinator and head coach.” Fangio said while addressing the media. “Having coached against Pat for a number of years, he’s always impressed me. His track record of developing younger players is outstanding. Pat brings a collaborative approach to working with the staff as well as a flexibility to adjust the offense to our players and opponents. We’re excited to add someone of his caliber to our coaching staff.”

Not only does Shurmer has experience as a coach, but he also has had some success as well. During his NFL career, he has been part of nine playoff teams, seven of which were division champions. He also coached in six conference championship games and has reached the mountain top in 2004 coaching in Super Bowl XXXIX. Shurmur coached 14 different offensive players that have combined for 23 Pro Bowl selections. In the last 17 seasons, he also has directly coached six different 3,000-yard passers, four 1,000-yard receivers and three 1,000-yard rushers.

During his time as head coach of the Giants from 2018-19, Shurmur inherited a three-win team and helped the offense improve significantly over the course of his two seasons. Only five NFL clubs produced more big plays (20+ yards, 4.5 per game) than the Giants from 2018-19 despite the team making several personnel changes on offense. He helped the offense rank fourth in the league with 76 explosive plays (20+ yards) in his first year leading the Giants in 2018. Veteran quarterback Eli Manning produced one of his most efficient seasons, completing a career-best 66.0 percent of his passes while throwing for 21 touchdowns and just 11 interceptions. Running back Saquon Barkley, the NFL Offensive Rookie of the Year, totaled more than 2,000 yards from scrimmage and 15 total touchdowns while wide receiver Odell Beckham Jr. topped 1,000 yards receiving in just 12 games played. In 2019, rookie quarterback Daniel Jones started 12-of-13 games and threw for more than 3,000 yards to go along with 24 touchdowns and 12 interceptions.

Before he was named head coach of the Giants, Shurmur spent two years as offensive coordinator for the Vikings. Originally hired as tight ends coach for the Vikings, he was elevated to offensive coordinator nine games into the 2016 season. By the end of the season Shurmur was named Assistant Coach of the Year by the Associated Press in 2017 after the Vikings won 13 games and advanced to the NFC Championship Game. The 2017 Vikings squad featured breakout seasons from quarterback Case Keenum (3,547 yds., 22 TD, 7 INT), wide receiver Adam Thielen (1st Team All-Pro; 91 rec., 1,276 yds., 4 TD) and tight end Kyle Rudolph (Pro Bowl, 57 rec., 532 yds., 8 TDs).

Vic Fangio and the Denver Broncos are hoping that Shurmer can carry over the success he experienced as a coach to their team. ESPN ranked the Broncos offense second worst in the NFL in 2019. They averaged 17.6 points (28th) and 298.6 total yards (28th). Will Shurmer be able to help the Broncos to get rid of their offensive woes?