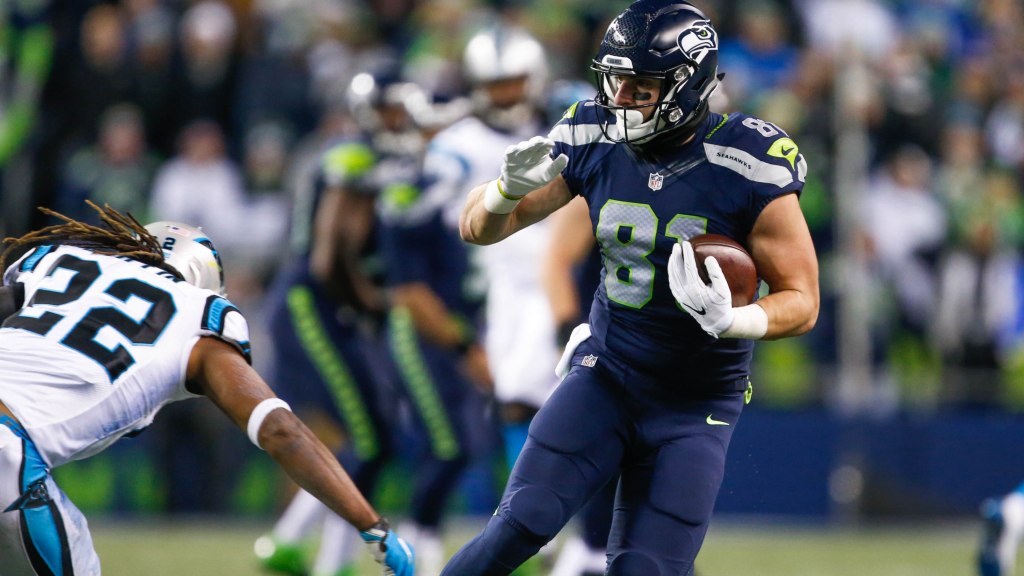 The NFL free agency period has been the talk of the sports world in the wake of the consequences that the Covid-19 pandemic has put on reality as we knew it. The NFL free agency period allowed sports fans to feel as if everything was business as usual, but of course there was a twist to it this go round. Teams were not allowed to hold workouts and physicals for their free agents, which has thrown a wrench in contract negotiations between some athletes and their prospective teams. Fortunately for Nick Vannett this was not the case for his free agency journey. In the name of social distancing, Denver Broncos newly acquired TE Nick Vannett held a conference call, instead of a press conference, to talk about his decision to sign with the Broncos during this free agency.

“It was definitely not what I expected it to be,” said Vannett. “The whole free agency process—I think that was the first time I got to realize that teams who show interest in you they all—for me, teams had higher needs and they had to address other needs. That’s when you kind of figure out that this is a business at the end of the day. Teams have a certain amount of money for other players. Some teams don’t have the money. It kind of leaves you with other options. Denver was in it. I didn’t really know that they needed a tight end. It wasn’t one of my teams that I was projecting to be with coming out of the combine when you first get all of that information from your agent. They made offers. They showed that they were really interested in me. For me, I kind of saw it as an opportunity because there are a lot of young tight ends in that room. It’s a younger team right now. They’re in the reloading process. It’s an opportunity for me to come in and to kind of be a mentor for the group to be a voice and a leader and lead by example. It was just an attractive situation for me. Then with the OC Coach [Pat] Shurmur coming in this year, he’s obviously had some great success everywhere he’s been running two tight end sets. I think it was all around a great situation. That’s ultimately what I saw in the Broncos.”

Vannett is a veteran tight end who is known for his blocking ability in the run game. The NFL is clearly a passing league, and fast tight ends with soft hands are highly coveted. Vannett spoke on why he thought the Broncos went after him and what he will bring to their offense. He also spoke about his willingness to grow as a receiver.

“That’s an area where I’ve always felt I’ve been kind of—where I haven’t really fully reached my potential there because I’ve always been the true Y,” expressed Vannett. “ I’ve always played in the true Y role. I’ve always came out there as a really vital part of the run offense. I’m not really considered the deep threat or the burner to take the top off the defense. That’s not really my game. I consider myself to be a good two-way player. Someone who can be effective in the run game, to handle blocks and to create holes and gaps in the running game. Even in the short intermediate pass game we can run precise routes, get open and create mismatches. As far as my role, I think they’re just looking for me to come in and just be effective in the run game. I don’t know exactly what they’re planning this year, but by seeing them signing [RB] Melvin Gordon [III] and kind of adding some more depth in the running back room, I think they’re going to really make the run game a big part of the offense this year. I think they’re just looking for guys to kind of come in and do an effective job at blocking and really helping out in the run game.”

Vannett also gave some tips on bringing ugly back to the tight end position and tells his mindset when it comes to blocking.

“I always thought one of the traits that you need to have as a blocking tight end is you just have to have some tenacity. Added Vannett. “It’s not a cute job. It’s not an attractive job. It’s not going to obviously—you’re not going to get any stats from it. You’re not going to get as much recognition from it, but I think it’s just all mentality. Every time I line up, I view it as OK, it’s me against the guy across from me. It’s just a battle. I think the mindset is just a fight. I have to—I can’t let him close that gap because that’s where our running back is trying to get through. It’s one of those mindset things. I think obviously there’s some technique that goes along with it too. That’s always been something you have to work on. It’s a lot of fight and you just can’t give up. You can’t—even if the guy gets advantage you still have to fight to regain that surface on them. That’s how I’ve always viewed it. It’s just a competition and I don’t want to lose against that guy that I have to go against.”

The Broncos’ TE gave some great insight on the subject of the NFL being a business first. The Broncos will be the third NFL team he has played on in his professional career. The following quote is on the subject of if there was anything the Steelers offense allowed him to show that the Seahawks did not and playing with multiple quarterbacks in Pittsburgh after QB Ben Roethlisberger went down.

“That’s a great question, ” replied Vannett. “I always felt like towards the end of my tenure with the Seahawks—I felt like I was slowly getting kicked to the curb a little bit. They had another guy, young guy they brought in [Seahawks TE Will] Dissly who they were pretty high on. I think they kind of saw him to be my successor. Slowly, I felt like they kind of minimized my role. They weren’t getting me involved as much. I heard the Steelers were looking for a tight end. They were making a lot of—they were trying to make an offer for quite some time. I think they finally made an offer that the Seahawks couldn’t refuse. That’s how the trade went down. Then when I got to the Steelers—talk about a crazy three months there. It seemed like I came into an organization when the wheels are starting to fall off a little bit. Guys are getting hurt. ‘Big Ben’ (Roethlisberger) was down. I feel like I never really got to experience the true benefits, the true atmosphere that the Steelers normally would have because I came in on a crazy situation. I can’t say that I have too many great things to say about that organization just from my time being there because it wasn’t the most pleasant experience I’ve ever had. I can’t really speak too much on them to be honest.”

Even Though Vannett isn’t known for his ability in the passing game, he had the luxury of catching passes for Seattle Seahawks’ QB Russell Wilson and Pittsburgh Steelers’ QB Ben Rothlesburger. He has also experienced catching for Steelers’ backups after Ben Rothlesburger went down with a season ending injury. He elaborated on getting to play with QB Drew Lock in Denver.

“Like you said, I’ve obviously seen both ends of the spectrum, ” answered Vanette. “I’m not going to say I have any expectations. I think first and foremost, I’m just excited to—whenever this whole situation blows over, whenever we can report in—I’m just excited to get in, get going and push forward. Obviously, I’ve heard some great things about Drew Lock. His stats show it from when he was a starter. He was 4-1. He finished out and had a great season last year. Honestly, I wasn’t paying too close attention to what he was doing. I was more focused on trying to win some games for the Steelers. Obviously, I think he’s got some great traits. I’ve heard a lot of great things about him. I’m excited to build that relationship with him and get ready to start working with him.”

Broncos’ new addition Nick Vannett is itching to get back on the football field and NFL fans are equally eager for football to return. It will be interesting to see how NFL rosters are put together by the end of the offseason.