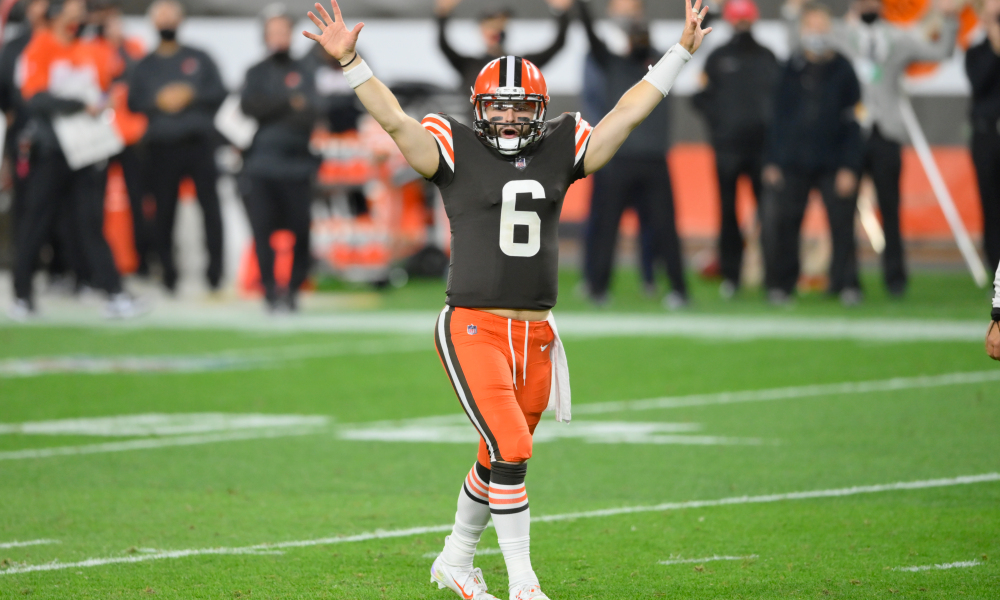 The weather was the same in Cleveland going into the bye week and coming out of it. On Sunday morning many Browns fans checked the weather report, and it brought back memories of the brutal loss to the Las Vegas Raiders two weeks ago. However, the weather was the same, if not worse, the Browns were getting back their all-pro running back Nick Chubb on Sunday, and he made all the difference for the Browns to squeak out a much needed win 10-7.

Around 12:30 PM Eastern time fans were just settling in at the stadium and at home. However, the start time for the Browns versus Texans match-up was delayed thirty minutes because of the weather. In pre-game warm-ups you could literally see the wind howling, and sleet raining down from above. What many Browns fans did not realize, however, was that the same weather that was in downtown Cleveland, was soon going to hit the suburbs. Before kickoff, around 1-1:15 Eastern time the storm had moved south hitting all the suburbs including Cuyahoga County and Geauga County. As we were all waiting to watch this barn-burner of a game, the worst possible thing happened, over half of the households in those two counties lost power. With the weather being what it was at that time, many fans realized this power outage was going to be no easy fix. Fans flocked to local bars and restaurants to watch the game. Many fans even decided to head to their cars so they could listen to Jim Donovan call the game on the radio. However, with less people watching the game, it was the perfect time for low-key, quiet running back Nick Chubb to return.

Chubb had been out due to a sprained MCL since week four. As if Chubb were the star in the Batman Series, people began asking, do you think he’ll come back? Well come back he did. In a snowy, cold, windy day down at FirstEnergy Stadium the need for Chubb was as big as ever. Not to mention Wyatt Teller, the Robin to Chubb’s Batman, also returned on Sunday and made a huge impact.

Finally, after the delay ended, the opening whistle blew and the Browns were ready to get going on offense. On the Browns first possession of the game, they put together a brutal, bruising 12-play, 52-yard drive to the Texans 7. There, center and quarterback J.C. Tretter and Baker Mayfield had trouble handling the snap, and fumbled the ball, which Mayfield recovered, and immediately got rid of, drawing a flag for intentional grounding. That backed up the Browns to the 24-yard line where Cody Parkey took the field looking to hit a 41-yard field goal. Now if you’re a Browns fan, you know how the team has had kicker after kicker fail in tough spots, heck Bears fans know it all too well. However, Parkey confidently kicked the ball right through the uprights, to give the Browns a 3-0 early lead. In a game like this, three points can be crucial.

The rest of the first half was filled with punts and turnovers on downs. After the Parkey field goal, both teams punted the ball back and forth, and each team turned it over on downs once. Going into half-time the score was still Browns 3-0.

The second half started the same way the game had gone since the Browns field goal on their opening drive. After deferring to the second half, the Texans received the second half kick and went three and out. After punting the ball to the Browns, the Browns gave it right back, also going three and out. When the Texans got the ball back, they went on a 13-play, 44 yard drive to the Browns 27 yard line where they stalled. Romeo Crennel, interim coach for the Texans had a tough choice to make, attempt a 45-yard field goal, or go for it on fourth and short. Crennel took the safe road and sent Ka’imi Fairbairn onto the field to attempt the field goal. However, to the Texans dismay, the kick sailed wide left, and those brave Browns fans who stuck through the weather to watch the game, cheered like hyenas at the sight of the missed kick.

At this point in the game, with three and a half minutes left in the third quarter, the Browns needed to put some points on the board. The Browns answered the call and went on a nine play 64-yard drive down to the Houston seven yard line. A field goal here would not get the job done, so that kid from Georgia took the game into his own hands. On 2nd and 6, from the Houston nine yard line, Chubb took a Mayfield handoff, got the first down, then hit a cutback to put him in the end zone. Parkey once again came onto the windy field, and nailed the extra point, putting the Browns ahead 10-0 with thirteen minutes to play.

After the score, the two teams traded punts and then with 7:50 left in the fourth quarter, Deshaun Watson led the Texans on a seven play, 90 yard drive. On first and ten from the Browns sixteen yard line, Watson connected with Cleveland native Pharaoh Brown for a 16 yard touchdown, The extra point was good for Fairbairn.

With just under five minutes left in the foruth quarter, it was time to put up or shut up for the Browns. Mayfield led the Browns on a nine play, 94 yard drive. On third and three from their own 40, Mayfield tossed Chubb the ball, and what happened next was the reason why we all love Nick Chubb. Chubb took the pitch, saw a hole, took it to the sideline, stayed in bounds and was off to the races for the touchdown. However, the self-less Nick Chubb, stepped out of bounds at the Houston 1-yard line. With the Texans out of time-outs, the Browns could kneel out the clock. Kneel out the clock they did! The Browns fought through the elements to give them a 10-7 win over the reeling Texans.

As stated in the opening paragraph above, there was no better time for the best running back in the league to come back. Chubb, who was still feeling pain in his knee, rushed the ball 19 times for 126 yards and one touchdown. The other great running back that rounds out the Browns backfield, Kareem Hunt also topped the century mark on the ground. He rushed 19 times as well for 104 yards.

Quotes of the Game:

“I’m a team player, so I decided to just to win the game and not worry about stats.” Nick Chubb on him stepping out of bounds at the Texans 1-yard line to let the Browns kneel the game out.

“For our defense to play and hold them the way we did … it was not going to be easy. I think our defense did a really nice job today and forced some punts.” Kevin Stefanski on the Defensive Unit (Browns)

“We had a lot of good blitzes, and we were able to get some pressure on (Watson) and caused him to throw some errant balls. It’s a testament to great play-calling and guys just rushing the passer well.” Myles Garrett on the Defense in the win over the Texans (Browns)

Nick Chubb, Running Back: 19 Carries, for 126 Yards and one touchdown

Deshaun Watson, Quarterback: 20-30 for 163 yards and one touchdown