Browns Shock the World and Beat Rival Steelers 48-37 for their First Playoff Victory since 1995! 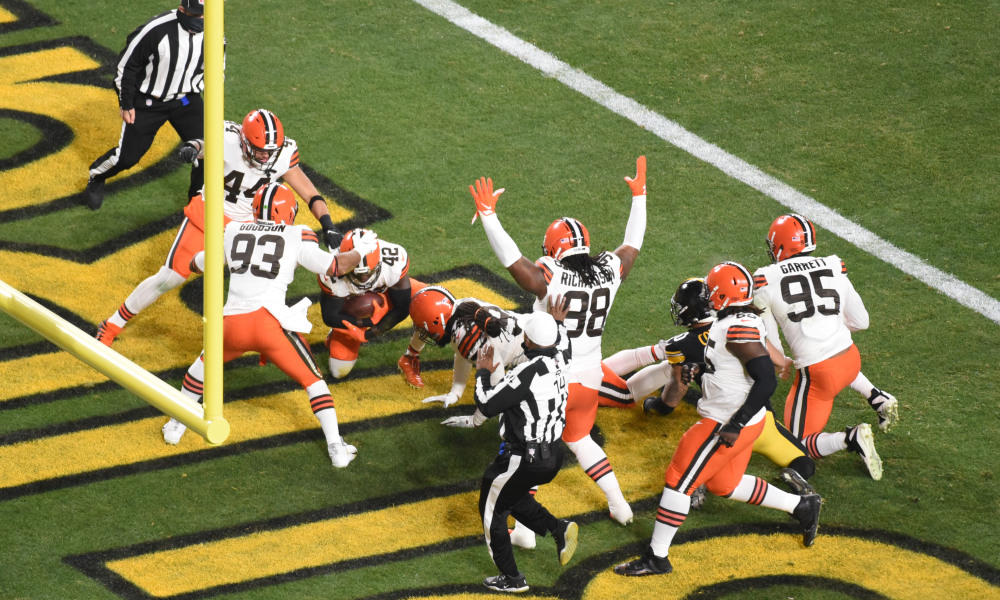 No one is going to stop the party around the state for Browns fans tonight. The Cleveland Browns, missing pro-bowl cornerback Denzel Ward, pro-bowl left guard Joel Bitonio, and Head Coach Kevin Stefanski, started off hot and jumped out to a 28-0 lead, and hung on for three quarters to win at Heinz Field 48-37. On the First Offensive play of the game, Steelers Center Maurkice Pouncey snapped the ball over the head of Ben Roethlisberger and bounced into the end zone where Browns safety Karl Joseph jumped on it for a Browns touchdown. The Browns would go on to have a first quarter that no Cleveland fan could have dreamed.

After the Joseph defensive touchdown, Pittsburgh drove the ball to their own 48. On first down, Roethlisberger dumped it off to Benny Snell, but M.J. Stewart stepped in front and picked it off. On the Browns ensuing possession, Baker Mayfield hit Jarvis Landry on a slant, and he rumbled 40 yards all the way to the end zone to put the Browns up 14-0. Again, the Steelers went three and out on their ensuing possession, failing to convert on 3rd & 1. The Browns got the ball back and Kareem Hunt punched it in from 11 yards out to put the Browns up 21-0. Were we dreaming? How is this possible. On the Steelers next possession, on 2nd and 20, Roethlisberger threw it high to Dionte Johnson, and it was picked off by Browns back-up safety Sheldrick Redwine who returned it inside the Steelers 30. Hunt took the ball again and bull rushed two Steeler defenders into the end zone, along with himself, to put the Browns up 28-0. The Browns 28 points was tied for the most points in the first quarter by a team in NFL Playoff History.

Before the half the Steelers put up ten points, including a field goal by Chris Boswell as time expired in the first half. The score at half was the Browns 35-10. No playoff team has ever lost a game when they scored 35 points in the first half, 11-0. However, this is no way made me or any Browns fan feel better.

Just like the first half was a dream, the beginning of the second half was a nightmare. The Browns deferred to the second half so they got the ball. They drove to the Steelers 49, but were stopped on third down. Gillan punted to the Steelers 16. This is where it all started to unravel. The Steelers went 84 yard drive in 8 plays that ended with a Eric Ebron Touchdown Reception from Roethlisberger. The Browns went three and out on their next possession. However, after the Browns stopped JuJu Smith-Schuster short of a first down at the Browns 49, Mike Tomlin decided to punt. That ended up being a mistake, as the Browns finally called a screen for Chubb who took it 40 yards to the house. The score was now 42-23 Browns.

The Steelers would put another touchdown on the board on their ensuing possession, with Roethlisberger finding Chase Claypool in the end zone to make the score 42-29. The Browns would tack on two field goals, and the Steelers would cut the score to 48-37 before attempting an onside kick, which was recovered by the Browns. After the failed onside kick, Baker Mayfield and the Browns got into victory formation, and kneeled out the clock to close out their first playoff win since 1995.

Baker Mayfield went 21-34 for 263 yards and three touchdowns. He was a leader for the Browns all night. Without Stefanski on the sidelines, Mayfield and center JC Tretter were the coaches on the field for the Browns offense.

It’s incredibly fitting that the Steelers, who have owned the Browns in recent years, fall apart when playing the Browns in their first playoff appearance since 2002. Next up for the Browns is a road game at reigning Super Bowl Champions, the Kansas City Chiefs. The Browns have opened as a double-digit under dog. However, no one believed they’d beat the Steelers, and in football, anything can happen.