Browns Come All The Way Back from 14 Down, Just to Lose in the Waning Seconds Of The Game 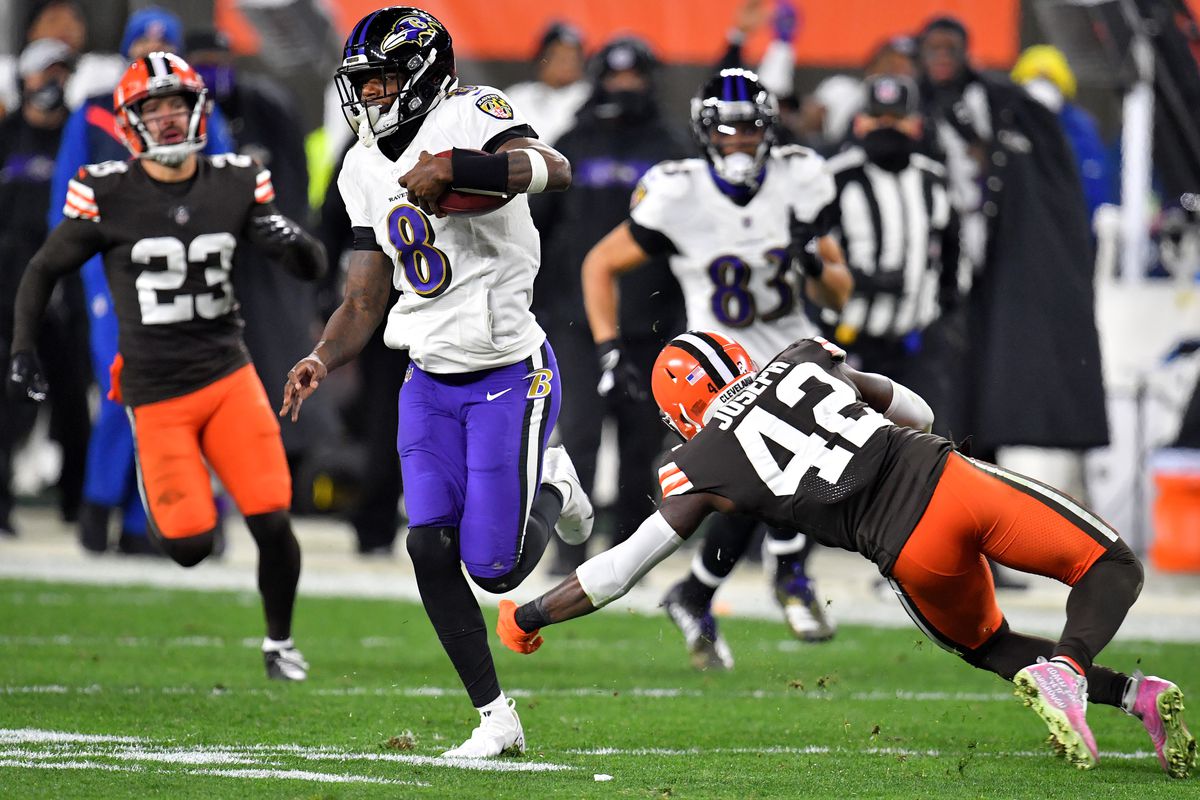 Many pundits and fans expected this game to be a ground battle between Kareem Hunt and Nick Chubb versus the three-headed monster that is the Ravens backfield. However, this was a game where the last team to have the ball was going to win the game in this barn-burner. Unfortunately for Browns fans, the Ravens had the ball last, and their consistent kicker Justin Tucker hit a 55-yard field goal with ten seconds left in the game, to give the Ravens the lead for good. The Ravens added a safety on the last play by forcing Jarvis Landry to step out of bounds in the Browns end-zone, to top off a game of the year candidate. The final score of the game was Ravens 47 – Browns 42.

The Ravens won the toss and deferred to the second half. Cleveland sure took advantage of having the ball first, driving 81-yards in 11 plays to take the early lead on a Nick Chubb 7-yard touchdown run.

The Ravens were quick to add a score to tie the game at 7. Lamar Jackson led the Ravens offense on a 9-play 73-yard drive that was capped off with a 5-yard rushing touchdown from quarterback Lamar Jackson.

The Ravens had a huge second quarter. After a Browns missed field goal the Ravens went on an 8-play 80-yard scoring drive topped off by an eleven yard scamper into the end zone for Ravens running back Gus Edwards.

The Browns answered right back with a long scoring drive of their own. Baker Mayfield led the offense on a seven play 75 yard drive that was capped off by a 14-yard rushing touchdown by Nick Chubb. Cody Parkey hit the PAT and the score was once again tied 14-14 with about four minutes left in the half.

After the two teams traded three and outs, Baltimore got the ball back before the half with about a minute left. Jackson took the Ravens down the field on a 4-play 56-yard touchdown drive, capped off with a Lamar Jackson 17-yard touchdown run. The Ravens went into half-time leading 21-14.

After winning the toss and deferring to the second half, the Ravens started the second half with the ball. They went on a 4-play 75-yard touchdown drive capped off with another Gus Edwards touchdown run to make the score 28-14 Ravens.

It looked as though the game was slipping away for the Browns, but on the ensuing possession, Baker Mayfield led them on an eleven play 75-yard touchdown drive. Kareem Hunt found the end zone from 5 yards out to inch closer to the Ravens, who still led 28-20. Yes, somehow Cody Parkey managed to miss an extra point in one of the biggest games of the year.

The Ravens were forced to go three and out on their next possession, and momentum was swinging back towards the Browns directions. However, after the punt, the Browns started on their own 13-yard line. On the first play of the drive Baker Mayfield was intercepted by Ravens linebacker Tyus Bowser, who returned it to the Browns one-yard line. The Ravens jumped at the opportunity and scored on the first play from the one. J.K. Dobbins ran into the end-zone to increase Baltimore’s lead to 34-20. Yes, the Tucker PAT was no good as it was blocked.

With the Ravens leading 34-20 with four minutes left in the third quarter, the Browns needed a score to keep the game within reach. Mayfield and the Browns marched down the field on a 12-play 75-yard drive that ended with a 21-yard touchdown pass from Mayfield to Rashard Higgins. The Browns converted the two point conversion, so the Browns were now only down six, 34-28.

At this point in the game, Ravens quarterback Lamar Jackson began cramping up, and had to be taken to the locker room, and his return was questionable. Trace McSorley stepped in for Jackson, and just couldn’t get anything going. The Ravens were forced to punt. After the punt by Baltimore, Cleveland would start the ensuing drive on their own 30 yard line down 34-28 with 12 minutes left in the game.

With six and a half minutes remaining, the Ravens needed to respond, and respond they did. They started their drive at their own 21. With Jackson still in the locker room being checked, McSorley led the Ravens down the field to the Browns 44 yard line, before McSorley himself was injured in a tackle from Myles Garrett. Out of nowhere, Lamar Jackson runs out of the Ravens locker room, and steps back in the huddle to lead the Ravens. Jackson was in only one play of the 9-play drive. However, his impact was huge when he came back. With a 4th & 5 and sitting at the Cleveland 44-yard line, the Ravens elected to go for it. Jackson took the snap, immediately rolled right, and looked like he was going to run, but instead he found a wide open Marquise Brown for a 44-yard touchdown pass. The Ravens converted the two-point conversion, and the Ravens led 42-35.

The Browns were not done yet, however. They got the ball with just under two minutes to play. The Browns marched down the field in four plays and capped off the drive with a Kareem Hunt 22-yard touchdown catch from Mayfield. As Cleveland fans were on the edge of their seats before the PAT, Cody Parkey came on and nailed his PAT to tie the game at 42 with 50 seconds remaining.

As great as it was to see the Browns tie it up late, but I think all Browns fans knew fifty seconds was too much time to keep the Ravens from scoring even a field goal. The Ravens got the ball on their own 25 yard line, and on first down Mayfield connected with stud tight end Mark Andrews for 14 yards. Jackson went back to the Mark Andrews well again as he found the big tight end over the middle for 14 more yards. It was now 1st & 10 Ravens from the Browns 47. Jackson then hit two short passes to Andrews and Willie Snead IV, to get the Ravens into Justin Tucker-field goal range. With ten seconds remaining, Tucker marched onto the field and absolutely nailed a 55-yard kick to win it for the Browns. Tucker hit this ball extremely well, it would have been good from 65-70 yards.

The Browns got the ball back on their own 25 with two seconds remaining. They did some sort of lateral play that failed miserably, and ended with Marlon Humphrey pushing Jarvis Landry out of his own end-zone for the safety. In the end the Ravens won a nail-biter 47-42.

Well, that loss sucked if you’re a Browns fan. However, this game does show that the Browns are improving week after week. They would still be in the playoffs if they started today. However, the Browns can’t sit back and feel bad for themselves, as they have another huge game Sunday night against the New York Giants.

Bad Beat Alert: The spread on the game was Ravens -3. So if you had the Ravens -3, the last safety saved you, and helped you cover. However, if you took the Browns +3, then I am truly sorry for this bad beat. There’s always next weekend!

Monday Night Football: Ravens at Browns. A Win and You Can Feel The Playoffs Live Blog
NFL Power Rankings Week 15