For The First Time in 18 Long Years, Baker Mayfield, Kevin Stefanski, and the Browns Have Clinched A Berth In the Playoffs 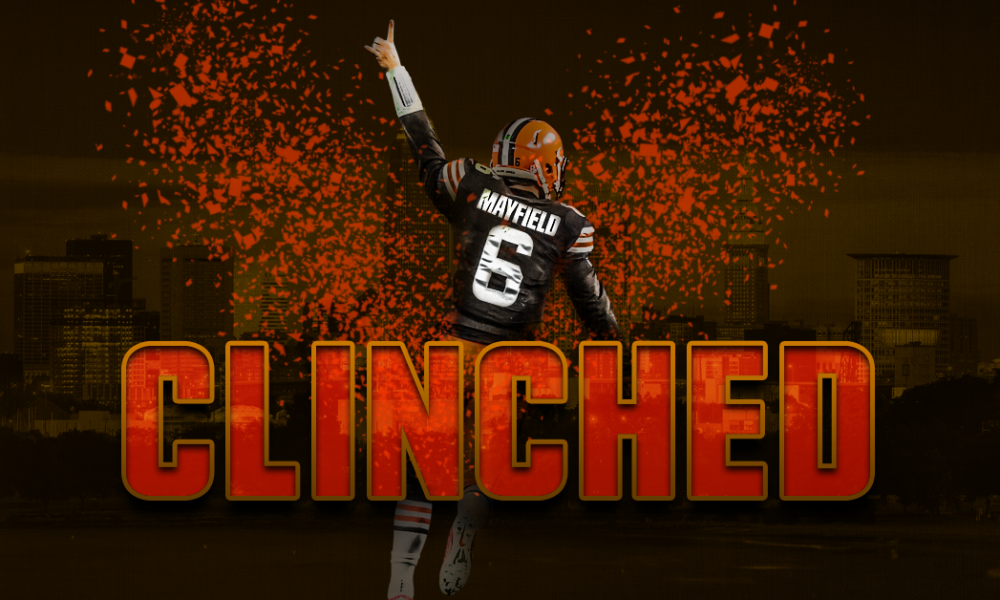 On this day in 2017, probably right around this time, the Browns had just completed their 0-16 season on New Year’s Day, with a loss to the Steelers. Not only were the Browns just 0-16 in 2017, they went 1-15 in 2016! However, none of that matters today. Today, Cleveland fans around the world can celebrate. For the first time in 18 years, the Browns have secured a spot in the playoffs. Baker Mayfield, Nick Chubb, and a tough defensive effort led the Browns all afternoon.

The closest the game got was the final score, as the Browns had two great plays in the final 90 seconds. Robert Jackson, who had been burned many times during the game, out-muscled Steelers rookie Chase Claypool, to force a high incompletion. After a nerve-wracking scramble for the onside kick, the Browns recovered and faced a 3rd and 5 with just over a minute left. Then it happened. The reason Baker Mayfield was drafted with the first overall pick, he took the snap and in a designed run, hit the edge and dove forward for a first down to cement the Browns playoff spot.

Baker had a decent day throwing, going 17-27 for 196 yards and a touchdown. However, it was his leadership and toughness that really showed. Fighting for every inch just to reach the playoffs. Browns fans, enjoy tonight and tomorrow, but come Tuesday it’ll be time to start focusing on the task at hand next weekend: facing the Steelers again, this time in Pittsburgh.

I will be writing a full recap of the game that will be out tomorrow, but for now it’s time to celebrate. Year after year of heart-break and losing, it really wears you down. However, today, today is a good day. The Browns knew they controlled their own destiny, and they showed that on the field. Final score from First Energy Stadium on the Lake: Browns 24 Steelers 22.

In their post-game press conferences Kevin Stefanski, Baker Mayfield, Jarvis Landry, Joel Bitonio, Nick Chubb, and Myles Garrett all explained how it feels to finally make the playoffs, in a city that was begging for post-season play.

“It’s a moment I will definitely never forget,” Mayfield said. “We are excited to have a chance to be the playoffs. The feeling of walking off the field and the energy in the stadium … it is a special moment for us.” (Forbes)

Left guard Joel Bitonio had this to say about the win in his post game press conference.

“Yeah it was great, great team win. It wasn’t a perfect game by any means. We had some guys out, they rested a bunch of guys and had some guys out too. The team found a way to win. That’s what it’s all about. It would have been really cool to have 60,000-70,000 people there, but the 12,000 that were there made some noise. It was much appreciated. It’s just one of those moments you look back like, that’s something we’ve worked for, for seven years now and it’s just cool to have a chance to go to the playoffs. You know we have a chance, we’re in the dance.”

Jim Donovan and former Brown great Doug Dieken have been the play-by-play and color commentators for the Browns since their return in 1999, had an excellent call as the clock was ticking down.

“The clock is running, with 52 seconds left to go, it’s a first down, and the bench area is feeling it right about now. 12,000 are going crazy inside First Energy Stadium, and wherever you are this is starting to become very very real that the Browns are going to go to the playoffs. They’re in victory formation, and Baker Mayfield takes a knee and the clock will wind down! An amazing story! The Browns will get their 11th win of the year, they’ll go 11-5, and they’re going to the playoffs! Unbelievable! What a season. The team’s off the sideline, congratulating. They could meet each other next weekend at Heinz Field. The ball game is over, and the Cleveland Browns have made it into the NFL playoffs for the first time in 18 long years.” (Jim Donovan)

“The only thing it’s missing is all of you!” (Jim Donovan)

Baker Mayfield summed up the game versus the Steelers on Sunday January 3rd, 2021 pretty well.

“For our team to, win 11 games this year over a lot of ups and downs. To learn new systems, offense and defense, over zoom meetings, to have a lot of new faces, and to get to know each other in a very different way. To come out and find a way to get into the playoffs in a division that has three teams in the playoffs, that’s pretty damn special. I’m proud of this team, but like I said, we’re not satisfied, and that’s the best part. We’ve scratched and clawed and a found a way to get in, when we had to.” (Baker Mayfield)

Well there you have it, the Browns are in the playoffs for the first time since I was nine-years old. Normally I would go in and pick apart the press conferences and dive deeper, but for now, this is good. We can celebrate today a little bit, but it’s time to sharpen our eyes to Heinz Field, and next week’s prime-time playoff match-up versus the Steelers for the third time. It’s the grudge match. See you next Sunday!*

*Also I know a lot of people that are Browns fans, Giants fans, Eagles fans, Cincinnati fans, and fans of a lot of other bottom-dwelling teams, and let me tell you this, after one day of experience: Boy is it great to focus on the playoffs next weekend rather than who the next Browns head coach would be on Black Monday in the NFL. So, just know Giants, Bengals, Jets, Jaguars, Giants, and Lions fans, it can get better!

I would also like to note how big of a weekend this was for Ohio’s football teams. On Friday, the Ohio State Buckeyes went into the semi-final matchup versus Clemson, again, as a touchdown underdog. Justin Fields and the Buckeyes beat Clemson by three touchdowns. Although the Steelers sat a lot of their guys, it doesn’t matter. Baker said it best:

“All we wanted was a chance, and now we have one.” (Baker Mayfield)

Once again the eyes of the sporting world will be focused on Ohio on Sunday night and Monday night, just like it was on September 29, 2020 when the Cleveland Baseball Team hosted the New York Yankees in the first round of the MLB Playoffs.