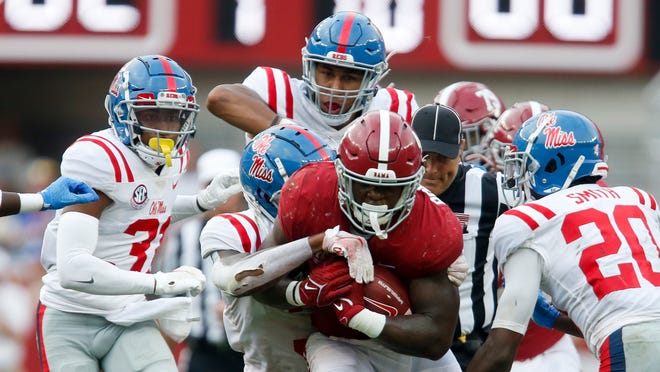 Next Week: At Texas A&M

Several bags of popcorn later, the Tide have now moved passed Ole Miss in SEC West competition and look to take on a wounded Texas A&M team coming off of two straight conference losses. Alabama and Georgia have entered a tier of their own. For now, it’s too difficult to get a read on who’s the better team, but by this point it’s almost a certainty that we’ll find out in Atlanta for the SEC Championship. Playoff slots pending, we may see them play twice.

Next Week: At Auburn

The Bulldogs are for real this year. Coming off a shutout win against Arkansas who was ranked in the top ten, their defense continues to win games. The offense is still a little worrisome, but the fact that Stetson Bennet IV only had to complete seven passes to put this game away means Georgia fans can get comfortable.

Next week’s matchup with Penn State is bound to be one of the biggest games thus far in the season. However, I don’t want to breeze over the Hawkeyes win last Saturday over Maryland. Maryland has been one of the more exciting teams in college football this year, and Iowa did our favorite thing here at Back Sports Page. They took care of business. Thumbs up for the Hawkeyes, 10/10, and we’re all proud of you. At this point in the season, nobody can afford upsets.

Next Week: At Iowa

Penn State did our favorite thing this week, they took care of business. They also did our second favorite thing, they put on a dominant defensive performance. They allowed less than 200 passing yards and less than 100 rushing yards to Indiana, but the most telling statistic of this performance is the zero that the Hoosiers left on the scoreboard.

Cincinnati is coming off a very impressive win over the Fighting Irish. Even though I expected that game to go the Bearcats way, I don’t know how many people really predicted what we ended up seeing. If you had any worries about this team being legit, there’s no reason to worry after what happened this last Saturday.

Next Week: At Nebraska

After a big jump into our top ten, Michigan sits at No. 6 and moves onto 5-0 on the season. I had next to zero expectation for this team, but the Big Ten has been full of surprises this year. They have five teams in my top ten this week, and the Wolverines sit as third.

The fourth best in the Big Ten! Still, this Buckeye team is crazy good. Some people have been making the mistake of writing them off after their home loss to the Ducks, but this team is shifting gears and will soon be the Ohio State we’re used to.

I wasn’t sure how far to bump Oregon in the rankings this week after slipping to the Stanford Cardinals in overtime. The Pac-12 is in bad shape this year, and it seems the Ducks are the sole team capable of reaching a playoff. Right now they’re sitting at No. 8 in my rankings, so they’ll have to win out and win convincingly to make up for a loss to one of the worse teams in the weakest of the P5 conferences.

The second best G5 team in my rankings, BYU hasn’t missed a beat and started their season undefeated while chaos rained down the rest of college football. Win games, win them well, don’t leave anything to chance, and you get a top ten spot this year. That’s exactly what the Cougars have been able to do and will likely continue to do.

Next Week: At Rutgers

The Spartans are rolling now on the best season they’ve had in years. After a statement win over a then-valuable Hurricanes team, the Spartans haven’t slowed down. The makeup of the Big Ten this year puts us in position to see a lot of great matchups, this team included in several.

Next Week: At Ole Miss

I normally don’t have notes after the top ten, but something needs to be said for this Arkansas team. They fell short against arguably the best team in college football, but unless you team made my top ten, I’d pick Arkansas to beat ’em. This is still a great team, just because they’re not the trendy undefeated they were last week doesn’t make them a different team.

Next Week: At Texas

Next Week: At Virginia Tech

Next Week: At Syracuse

Next Week: At Arkansas State

Next Week: At Navy

Next Week: At Washington State