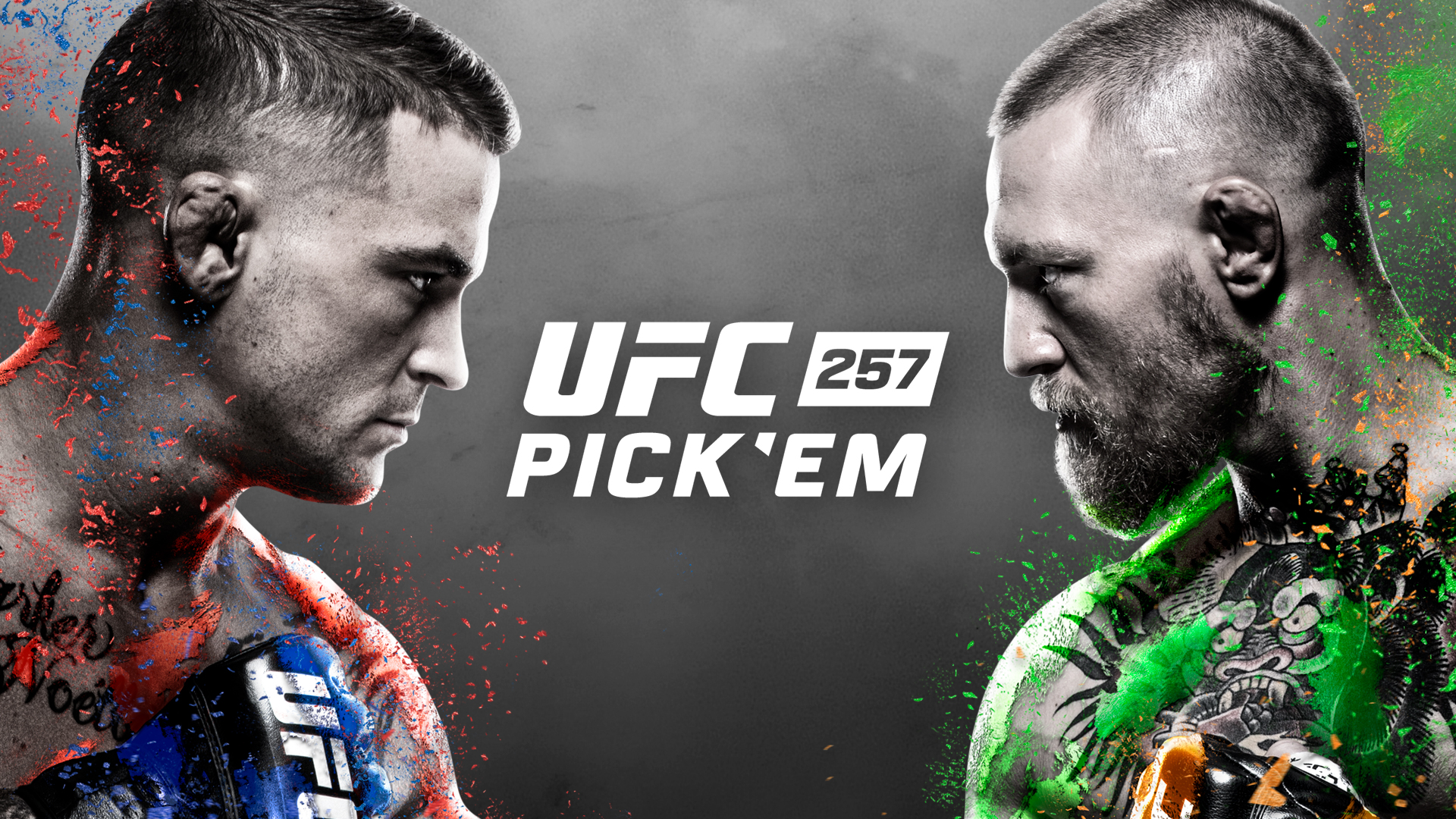 UFC 257: Poirier vs McGregor is set to kick off tomorrow night on Fight Island in Abud Dhabi. The main stage is set for a rematch years in the making – as ‘The Notorious’ Conor McGregor returns to the octagon to face Dustin ‘The Diamond’ Poirier. These are the official UFC 257 predictions.

Lightweight contending mainstay and former interim lightweight champ Dustin Poirier is hoping to crash McGregor’s party and avenge his 2014 loss to the Irishman. Before that though, we gain witness to a hyped newcomer in Michael Chandler debut versus the always violent Dan Hooker. The pair of featured lightweight bouts conclude the UFC’s first PPV of the new year.

Alexis Rodriguez: The rematch that is six years in the making. Poirier is a much different fighter with a whole new arsenal of weapons and tricks. Meanwhile, McGregor is the same prolific striker with the same bravado. He looked amazing against Cerrone, and Poirier pulled through a crazy battle with Hooker.

That fight however, showed that Poirier can get hit and hurt. It must be noted that McGregor is different than Hooker – who looks to pressure and land the left hand. Suffocating Poirier won’t be easy, considering Poirier’s boxing prowess.

‘The Diamond’ knows he has power, and he’s willing to stand and trade – something McGregor aims to avoid. Conor’s best chances for a finish will come early on, because the longer the fight goes, the more it benefits Poirier. Still, this feels like a poor match up for Poirier – versing someone with the reflexes, instincts, and skills to avoid his best offerings.

Ryan Truland: Like I said before, throw their first fight right out the window. The Dustin Poirier who we’ve seen since 2017 is many levels above the one who fought McGregor in 2014. How’s this for a list of bodies since then: Anthony Pettis, Justin Gaethje, Eddie Alvarez, Max Holloway, and Dan Hooker.

This is a different Conor McGregor as well. This Conor is focused and hungry to compete – possibly more than ever before – and that’s scary. He promises a “masterpiece”, but don’t expect another knockout in the opening minutes. Moreover, the former double-champ has taken his training to different levels and different places – i.e., Portugal.

It’s true that the longer this fight goes, the more it favors Poirier though. The chance of a McGregor knockout significantly goes down after the second round – considering he’s never finished someone outside of the first two rounds. I believe that changes at UFC 257.

I envision Poirier utilizing his head movement, footwork, and crisp boxing to avoid Conor’s early power shots. He’ll even land a few significant shots of his own. Then, round two things open up more and the two begin trading with McGregor inflicting more damage with his power advantage. Then third round Conor drops Poirier and finishes the job – completing the masterpiece.

Alexis Rodriguez: Michael Chandler finally makes his UFC debut. The former Bellator lightweight champ is a wrestler who’s fallen in love with striking over time. Against Hooker, he’s going to have to go back to his base.

Hooker is more than hittable and has shown a limited gas tank, but his offense is spectacular. He was able to hurt Dustin Poirier and has an arsenal that Chandler just doesn’t have on the feet. It’s hard to hold Hooker down as well.

This is a tough fight to predict, but Hooker should take it with his ability to defend the takedowns. If Chandler does get Hooker down, he may not even be able to hold him there. ‘The Hangman’ may not be able to get the finish, but he’ll do enough to get a decision in what will be a grueling affair.

Ryan Truland: Michael Chandler’s UFC career will be much different from Ben Askren’s. This former Bellator champ has the all-around game to compete with the best lightweights in the world – and that’s exactly what Dan Hooker is.

Of the UFC 257 predictions, this one’s most difficult to pick in my opinion. Yes, Chandler has beaten the likes of Benson Henderson, Eddie Alvarez, and Patricio Freire. However, he’s also lost to Alvarez and Freire. Moreover, Hooker is very, very different stylistically from those three athletes.

Hooker is confident in his wrestling defense and I believe him. I think he’ll handle himself grappling against Chandler. Notably, Chandler has power in his hands and he’s shown a likeness to trading on the feet since beginning MMA in ’09.

This one will be back and forth. Still, I’m going with the striker Dan Hooker to win over the judges in the end.

Alexis Rodriguez: This one is all about who can outwork who. Both are not known for one particular skill or area. Calderwood can strike and wrestle, but has shown vulnerability to submissions.

Meanwhile, Eye can outpace her opponent and grapple moderately, but she has left a lot to be desired recently. Calderwood will use grappling and clinch work to outwork Eye. ‘Evil’ Eye could threaten submissions, yet it’s difficult to count n her pulling something crazy off.

In her last three outings, Jessica Eye is (1-2, missing weight twice. This fight will tell a lot regarding the direction of her career. On the flip side, Joanne Calderwood has tendency to get caught in submissions, but that shouldn’t be a concern against Eye.

This one will be competitive, but I don’t know how much either will be in “danger” throughout this contest. I’m going with Calderwood winning on the scorecards.

Alexis Rodriguez: Ribas is a star in the making. Her ground game and judo make her incredibly dangerous to coincide with her improvements on the feet. She is insanely aggressive on the ground each night out.

Rodriguez is a striker who has shown weaknesses to grapplers, but her striking is powerful and can truly stop Ribas is done right. However, Ribas applies pressure masterfully and her defense should hold enough to where she can comfortably take Rodriguez down.

It may take time to get her down, but continuous pressure, she can do so and finish the fight. Rodriguez will look good early, but slowly, Ribas will take over and secure a finish.

Ryan Truland: Marina Rodriguez has had a strange start to her UFC career – owning wins over Tecia Torres and Jessica Aguilar, along with draws to both Randa Markos and Cynthia Calvillo. She clearly can hang with most of the top-10 flyweights on the roster.

The flyweight she’ll be facing at UFC 257 is though to be a rising star. That very well may be the case, but let’s pump the brakes a little. She’s (4-0) since entering the UFC – including victories over Mackenzie Dern and Paige VanZant.

Ribas definitely owns the advantage on the ground and she might not be far behind in terms of striking. I think she uses the striking to work the fight to the ground where she’ll finish it.

UFC 257 is LIVE tomorrow night beginning with the early prelims at 6:00PM (ET) only on UFC Fight Pass. Then, catch the prelims at 8:00PM (ET) on ESPN and ESPN+. And then, the moment we’ve all been waiting for, the UFC 257: Poirier vs McGregor main card begins at 10:00PM (ET) exclusively on PPV.