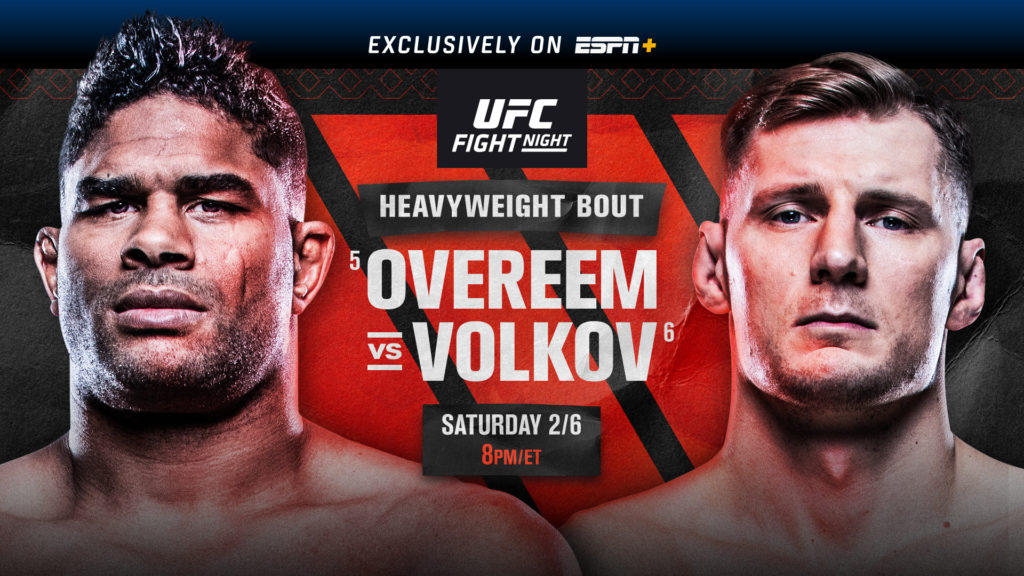 Heavyweights Alistair Overeem and Alexander Volkov are set to battle it out tomorrow at UFC Vegas 18. We’ll pick that and the other biggest fights on the card here in BSP’s UFC Vegas 18 staff predictions.

Alexis Rodriguez: Alexander Volkov is a kickboxer who uses kicks to keep the fight at distance. Meanwhile, Overeem is the ultimate veteran’s veteran. He’s also a kickboxer, but he likes to close the distance and throw knees. His clinch and top-game have elevated him immensely.

Volkov has solid conditioning and he takes his time picking his opponents apart. His weakness, however, is his takedown defense. Overeem will look to implement a similar game plan as the one used by Curtis Blaydes when facing Volkov.

This is a close fight – Overeem wants one more run – Volkov is always on the cusp of becoming a top contender. It’ll be back and forth, but Overeem’s durability will be the x-factor.

Ryan Truland: This is Overeem’s final run. Alexander Volkov presents a rare challenge to him too – he’s taller and longer. Still, I actually believe Overeem matches up well here.

‘Drago’ enjoys fighting a clean kickboxing fight at his preferred distance. That’s something Overeem just won’t allow to happen. In fact, he’ll look to take Volkov down to wear him out.

A dirty fight is a good fight for Overeem in this case. Heavy clinch work, grueling grappling, and violent ground and pound will lead Overeem to victory.

Alexis Rodriguez: Cory Sandhagen’s movement, distance management, scrambling and uniqueness is unlike anything Edgar has ever seen. Edgar is the speedy in-and-out striker with great wrestling and top game. He’s going to try to use his wrestling – especially seeing what Sterling did to Sandhagen.

Frankie may be able to find success with takedowns, but Sandhagen’s scrambling will remain an issue. Sterling didn’t allow Sandhagen breathe because he was insistent on attacking. Whereas, Edgar is less aggressive in his ground work.

Therefore, it seems like this is Sandhagen’s fight to lose. He’ll keep it on the outside and land strikes to keep Edgar at bay most of the night.

Ryan Truland: Vegas along with just about everyone and their mothers are picking Sandhagen in this one – and I’m inclined to agree. I think Frankie Edgar matches up well with a lot of the top bantamweights, but not Sandhagen.

Sandhagen will learn from his last outing and not allow Edgar to dominate him in the grappling department. Additionally, he’ll likely be able to utilize his reach to out-land Edgar on the feet.

Alexis Rodriguez: Kape is a UFC newcomer signing from RIZIN, who has shown tremendous finishing ability and strength. Meanwhile, Pantoja is more of a grappler, but he can strike as well. He’s shown flashes of his full-potential, but has fallen short against the likes of Askar Askarov and Deiveson Fiueiredo.

Kape has more hype because of his raw abilities, but Pantoja is a tough draw in your debut. Look for Kape to set the tone early with powerful strikes and do enough damage to take this fight. Nevertheless, this is a can’t miss fight.

Ryan Truland: Manel Kape has a lot of star qualities about him. He produces highlights and he handles himself confidently outside of the cage. He’s faced some quality competition over at RIZIN as well.

His opponent, Pantoja, is a top-10 mainstay within the flyweight division. He’ll have the advantage if this fight ends up on the ground, but it’ll be difficult to take Kape down.

Kape is an excellent Muay Thai practitioner, who can stun his opponents with his hands. Getting in close and then being able to get him down will be very difficult. I think Kape will land early and hard.

Alexis Rodriguez: Ferreira is a great grappler, but it’s his pressure and fast striking that make him so dangerous. Against Anthony Pettis, he simply gave him no space and worked to a submission win.

Dariush has become a heavy handed, durable grappler. He is willing to ride out flurries and weather stormer to enact his own power or suffocating grappling.

Their first fight is irrelevant, but Ferreira’s inactivity may be his undoing. With only three fights in the last three years and with Dariush staying busy, it feels like Ferreira may get a wake up call.

Ryan Truland: This is the most fascinating fight on the card in my eyes. Something tells me the winner is going to have a massive 2021. Unlike UFC 257’s rematch, I think the winner of this first match up will prevail once again.

Beneil Dariush is putting it all together – from his grappling, now to his striking – he’s a problem for anybody at 155lbs. I’ll admit, of all the UFC Vegas 18 staff predictions, this is the closest call. I just think Dariush is slightly better in every aspect.

Alexis Rodriguez: A typical striker vs grappler match up. In this case, it seems as though the striker has an advantage though. Rodriguez is dangerous on the feet – his last fight ended in controversy, but he’s got some momentum.

Marques won his debut fight by decision, but his takedowns leave something to be desired. Rodriguez’s power striking may be too much.

Ryan Truland: Danilo Marques has a puncher’s chance in this one – or I should say a grappler’s chance. If he can navigate through Rodriguez’s heavy shots, he’ll threaten with submissions.

However, I think Rodriguez is getting better each time he fights right now. His striking, both in close and at distance, is dangerous. I see him catching Marques coming in with a heavy right hand.

Tune in for the prelim bouts tomorrow at 5:00PM (ET). Then, the main card begins at 8:00PM (ET). Hope you all win some money with BSP’s UFC Vegas 18 staff predictions!