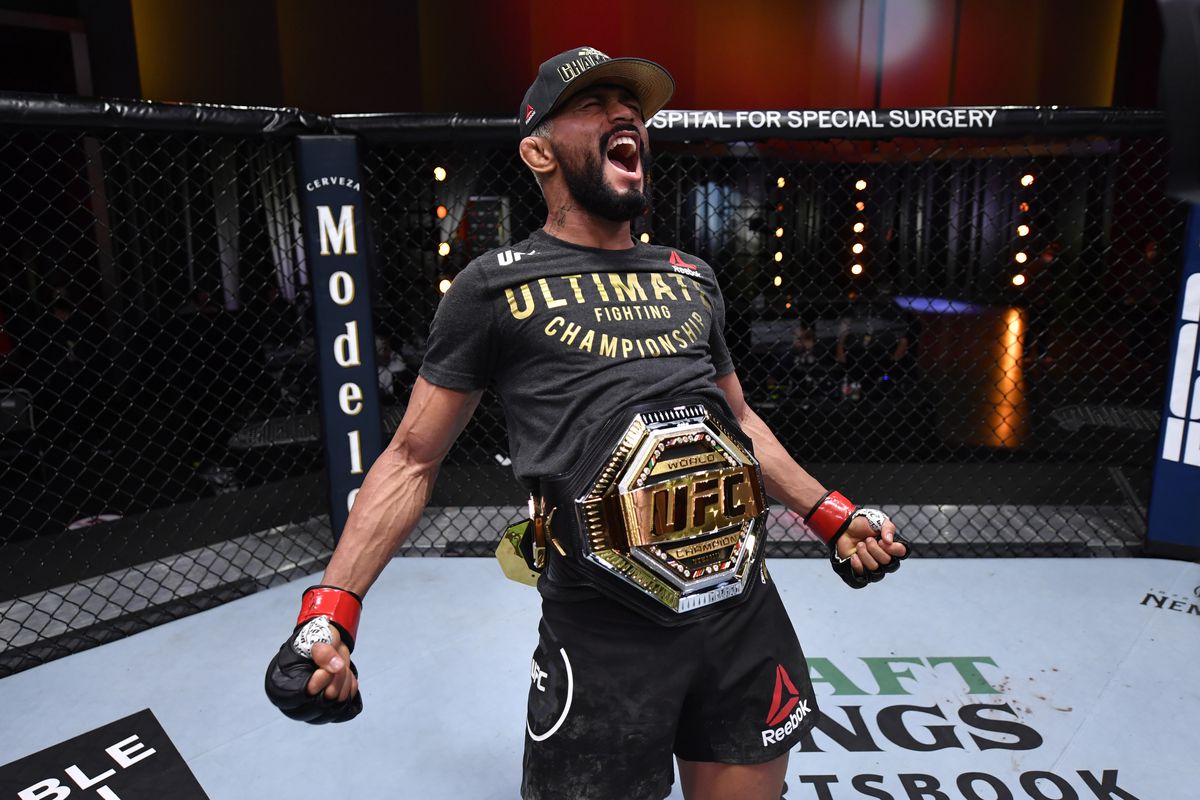 UFC 256: Figueiredo vs Moreno is live this weekend in Las Vegas, Nevada. The year’s final PPV event is packed with compelling storylines, but there are some matters that must be unpacked. Here we will answer the burning questions heading into UFC 256.

Will Deiveson Figueiredo enter in tip-top shape after just three weeks since his last bout? What will the winner of the co-main event do next—fight for the title? Do Kevin Holland and Ciryl Gane receive main event opportunities with wins? Can Renato Moicano rediscover the flame he once had? How will the plethora of Brazilian fighters fare?

All of those questions will be answered below.

How Will Figueiredo Be Affected by the Quick Turnaround?

First things first, the notion that Deiveson Figueiredo struggles to make 125lbs is largely false. The flyweight champ has missed weight just once in 10 UFC appearances. He’s had zero issues making the mark for his previous two bouts.

The reigning, defending flyweight champion will break the record for shortest time between title defenses at 21 days. He’ll also join rare company by headlining back-to-back UFC PPVs. How will the fastest turnaround by a champion affect his weight cut?

Well, earlier today, Figueiredo told Ariel Helwani through his translator/manager that he currently weighs 135lbs—which is one pound less than what he weighed the Wednesday prior to UFC 255.

‘Deus Da Guerra’ reported that the reason for his successful weight cut is immense focus. He stayed in Las Vegas following his first title defense, rather than flying home to Brazil. He also hired a nutritionist to ensure making the mark of 125lbs.

After revealing his plans to have Figueiredo-Moreno headline UFC 256, Dana White expressed his concerns regarding the champ’s weight cut. At this rate, there’s nothing to fear because it appears as though he’ll have little issue fulfilling his responsibility of making weight.

Whether or not his performance will be affected by cutting weight twice in a month remains to be seen. Remember though that Brandon Moreno is in the SAME situation—having also fought at UFC 255.

Does Winner of the Co-Main Event Receive a Title Shot?

There are several layers to this question. Starting with the fact that nobody knows whether or not the lightweight champ, Khabib, will compete again. How much time will Dana give him to decide before stripping him?

Then you have the logjam of contenders at 155lbs. Two of them are scheduled to fight Jan 23rd as Conor McGregor returns to rematch Dustin Poirier. An instant contender joined the promotion a few months back in Michael Chandler. Oh and lets not forget about Justin Gaethje—a man who essentially dominated Tony Ferguson to win the interim belt.

UFC 256’s co-main event features two of the most skilled lightweights on the planet. Charles Oliveira owns the longest win streak in the entire division, outside of Khabib. It has to be noted that he finished each opponent along that streak (5 subs/2 TKOs). Meanwhile Tony Ferguson is coming off a loss, but he had won his previous 12 leading up to that.

If I had to guess, I’d say if Oliveira wins he’ll fall victim to the logjam of contenders ahead of him. ‘Do Bronx’ will make his case to fight for a belt—a strong case at that. He’ll need another win over someone ranked ahead of him to get his due chance.

Ferguson on the other hand has much more of a puncher’s chance if he leaves with a win at UFC 256. He’ll call directly for Khabib—which might get the champ’s attention. It might not, but if Khabib were to come back for one more fight, finally fighting Ferguson would make for a good sendoff.

Do Both Holland and Gane Get Main Event Slots With Wins?

The quick answer is an astounding yes. Kevin Holland was already scheduled to headline last week’s event, but unfortunately he tested positive for COVID-19. Meanwhile, when you look down the heavyweight rankings—the most intriguing possible contender is undoubtedly Ciryl Gane.

If ‘The Trailblazer’ gets past Jacare Souza, the UFC may decide to rebook him versus Jack Hermansson. Holland is now officially ranked at middleweight, leaving several doors open. Edmen Shahbazyan and Uriah Hall would make for fun next opponents for Holland—if he wins Saturday.

If ‘Bon Gamin’ defeats Junior Dos Santos, expect him to headline a Fight Night card some point in the spring of 2021. Possible foes include Shamil Abdurakhimov and Augusto Sakai.

UFC 256 will tell us a lot about both these rising stars.

Can Moicano Recapture the Flame?

Heading into his fight early last year versus Jose Aldo, many believed Renato Moicano was on the brink of contending for a championship. Fresh off the heels of beating both Calvin Kattar and Cub Swanson—the Brazilian seemed primed to make a run up the rankings.

Instead, Aldo knocks him out in the second round. Then, a few months later he gets finished in the opening round by Korean Zombie. Back-to-back losses forced the 31 year old to reevaluate some things. He currently finds himself unranked—fighting tough prospects.

He fended off the first prospect. Now, he faces Rafael Fiziev in what’s a sure-fire crossroads fight. The time is now for Moicano to rekindle the flame he once had. I think he gets the job done.

Ton of Brazilian Flavor – Chance of Running the Table?

Of the 20 fighters competing at UFC 256, seven are Brazilian. Every one of the main card bouts features one Brazilian. So what are the chances that they run the table this weekend? In actuality, that’s impossible because Mackenzie Dern and Virna Jandiroba face off in an all-Brazilian match up.

Aside from that fight though, there’s a feasible chance that each main card victor hails from Brazil. In fact, if you’re a betting man/woman, there are a couple lines to take advantage of this weekend.

For instance, Draftkings pegs former champ Junior Dos Santos as a (+300) underdog to Ciryl Gane—who has never fought somebody close to as tough as JDS. Moreover, Charles Oliveira, who hasn’t lost since 2018, comes in at a (+138) ‘dog against Tony Ferguson. Laslty, Jacare Souza, who’s always incredibly tough to beat, is currently a (+100) underdog to Kevin Holland.

I don’t think the Brazilians run the table at UFC 256, but I think all in all, they’ll have a successful evening.

UFC 256 — Everything You Need to Know
Harden To The Bucks?