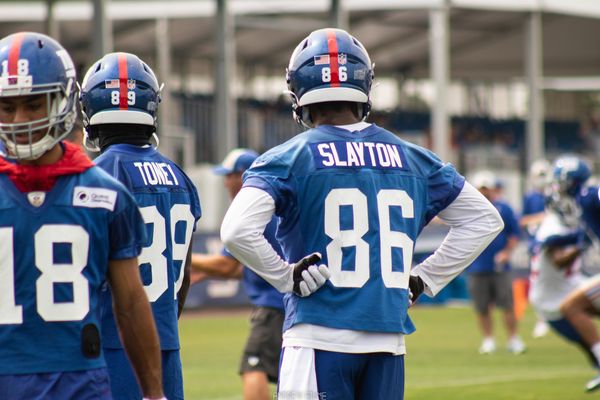 The new chapter of Giants football continued Friday night at Metlife Stadium for the annual Blue and White Fan fest scrimmage. A packed house got their first look at the 2022 Giants and the reviews are mixed.

Big Blue attempted to make the interaction between the team and the fans a top priority as after the scrimmage, players stayed behind and began throwing t-shirts into the stands.

Besides the grander, the focus became on football and the current state of the team. The media has been critical of the teams play so far during the preseason and as stated before, the fan base had their first look to decide for themselves.

The opinion of Wide Receiver Darius Slayton has seemed to change since his breakthrough performances in 2019. Which may or may not be because of the upgrade of talent in the wide receiver room, or his inability to grow as a player.

Over the last three weeks Slayton has seen his time at practice being spent with the second and third teams. A far cry from catching passes from Daniel and Eli Manning.

Slayton has seen a growth of talent enter the receivers room since the 2019 season as he has been joined by Kenny Golladay,Wan’dale Robinson, and Kadarious Toney. When asked about his current status last week at practice, he was quite coy about it.

“I don’t think I have ever been a top option here. We had Evan (Engram), Shep, Saquon, and Golden. It’s kind of always been that way. I just try to take advantage of my opportunities. Doesn’t matter if I’m the second, third, or fourth option.. Doesn’t matter.”

Slayton has acknowledged change of management’s decisions has made an impact on what he is attempting to do as far as his roster spot.

“We have had three different head coaches meaning we had to start from scratch, we are more talented then we were when i got here in ’19.” For me personally I was never the number one pick but we all welcome these challenges to push ourselves.”

As of now Slayton is on the roster but practicing with the special teams and the third option receivers. If cut, the Giants will save over two million in salary.

Slayton also understands that his time with the Giants might be running out. Recently Slayton discussed his time in New York  and his future.

“Obviously I have enjoyed my time with the Giants, hopefully I will be here much longer but at the end of the day I love playing football so either if it’s here or on Rt.3. I just want to break open and try and catch the ball. I just need to take advantage of the reps I get.”

Take a listen to Slayton’s media session with us for his take on the situation.

Tomorrow we discuss the Enigma which is Kadarious Toney!!