Can Delvi García be the Yankees Next Big Pitcher? 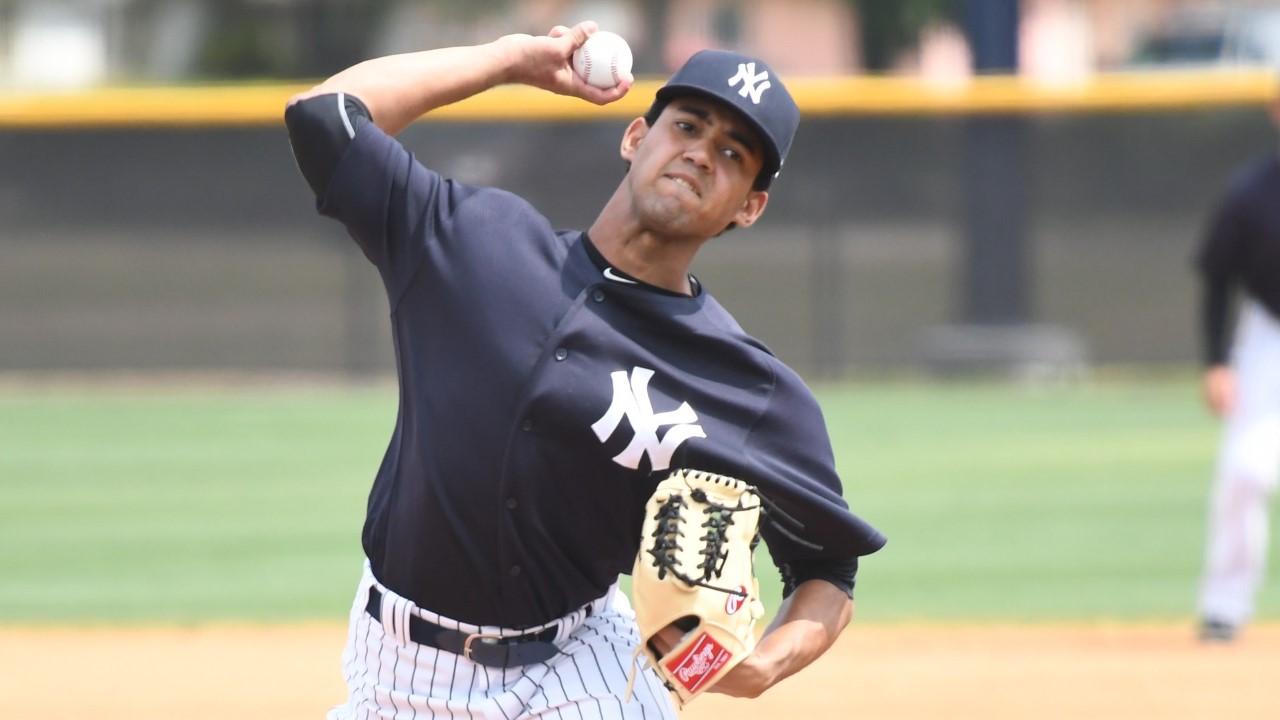 Note: There is a key at the bottom of the article for unspecified stats and acronyms. Some of the stats can be pretty advanced so please check the list beforehand.

Delvi García has been a hot topic the last few weeks and was even the #1 searched player in the minor leagues on FanGraphs for a few days. Originally García burst onto the scene with a solid 2018 campaign. He was also ranked the fourth-best prospect in the Yankees farm system before the 2019 season; now he could be the best in their system. Well, who exactly is Delvi García? What makes him so good?

The Yankees signed García in the international market in 2015 for $200,000. Last year, García emerged as a polished prospect with a fastball, curveball, and changeup repertoire. The 5-foot 9-inch Dominican native made his mark by moving up from low Single-A to Double-A in just three months. That jump up to the next minor league level is impressive for anyone, especially for a nineteen-year-old. One of the biggest highlights for Garcia in 2018 was when he threw seven perfect innings, racking up twelve strikeouts. As a result, García led the charge in a combined no-hitter for his Single-A advanced team.

García’s three pitches also have high potential. His fastball ranges between 91-96 MPH. Also, his deceptive motion allows his fastball to have late riding life against opposing hitters. Consequently, the late-life makes the fastball seem even harder than his 91-96 MPH range indicates. However, García’s best pitch is probably his curveball. His curveball has so much depth and action that at times, he is unable to locate it for a strike. Lastly, if García can utilize his changeup more effectively than he can have three plus pitches—perfect for a role as a starter on the Yankees.

The Yankees have had successful Dominican minor league graduates in the past two years in Luis Severino and Domingo Germán. Severino placed third in the AL Cy Young in 2017. From 2017-2018, Severino has an 11.2 fWAR. Additionally in the two years that Severino was solely a starter for the Yankees, he always had an ERA under 3.40, FIP under 3.10, K/9 over 10.35, HR/9 under 1.00, and thrown over 190.0 IP in back-to-back years; an impressive feat in modern-day baseball. Although Severino will not pitch until late August or September, Germán has picked up the slack. In fact, in his first year as a full-time starter, Germán has a major-league-leading 12 wins. Germán also has an impressive 3.39 ERA, 4.03 FIP, 9.72 K/9, 2.15 BB/9, and a solid 2.0 fWAR.

However, both of these starters originally had two plus pitches, and as a result, spent some time in the bullpen where they both dominated. That being said, by allowing Germán and Severino to accumulate major league service time in the bullpen, they were able to play around and develop their third pitch at the highest level. There is a good reason to believe that García can be successful in the Major Leagues. García has dominated Double-A as a starter in Double-A 2019; he has an impressive 3.00 ERA, 2.19 FIP, 0.35 HR/9, and a 14.29 K/9.

For comparison, Severino had similar numbers in the starting role in Double-A. In two Double-A stints, Severino always had an ERA below 3.35, FIP below 2.30, K/9 over 10.35, and HR/9 below 0.50. When Germán started in Double-A, he had a 3.00 ERA, 3.59 FIP, 10.39 K/9, and 1.09 HR/9. Even if García falls between these two lights out starters, the Yankees will have another solid pitcher in their starting rotation. Consequently, García was named as the starting pitcher in the Futures Game—an All-Star game consisting of the best minor league players during the year. García threw a perfect 1-2-3 inning with a strikeout. His impressive first half in Double-A and the Futures game performance allowed García to be promoted to Triple-A. Now just one level before the majors, García has already impressed with a solid his first start; in 5.0 IP, García gave up three runs, and racked up six strikeouts to get his first Triple-A victory.

The future is bright for the young right-handed pitcher, and there is a good chance that he can see some time in the majors in 2019. As mentioned in my last article, “The Yankees Need a Reliever”, I mostly described external options for the Yankees to go after. However, the one bright internal option (besides Dellin Betances coming off year-long injuries) is Delvi García. García already fits the reliever role with two plus pitches, keeps the ball in the ballpark, and strikes out a ridiculous amount of batters. Additionally, the Yankees’ very own CC Sabathia will be retiring after the 2019 season. For that reason, García will have his first real crack at the starting rotation. Essentially, García can be seen as the Yankees sixth starter in 2020—meaning that when a starter goes down, he could be the first man up to take his place. With this in mind, every Yankee fan should be excited to see García at the highest level, and hopefully, he will be a part of the Yankees potentially deep 2019 playoff run.

Key:
ERA= Earned Run Average: The average number of earned runs a pitcher gives up in a 9-inning game. A 4.15 ERA was league average in 2018.
FIP: Essentially an ERA that’s more focused on what the pitcher can control without solely relying on his defense (strikeouts, walks, homers, hit batters). MLB Average: 4.20 FIP
K/9: Strikeouts per 9 innings. MLB average: 7.7 K/9
BB/9: Walks per nine innings. MLB average: 2.9 BB/9.
HR/9: Home runs allowed per 9 innings. MLB approximate average: 1.35 HR/9.
fWAR: Wins Above Replacement from Fangraphs. For example, If a player has 0.1 fWAR they are worth 0.1 wins more than a replacement-level player (0.0 fWAR). During the halfway mark of a season, a starting player with 1.0 fWAR is an average starter.

The Yankees Need a Reliever
The Turn Around