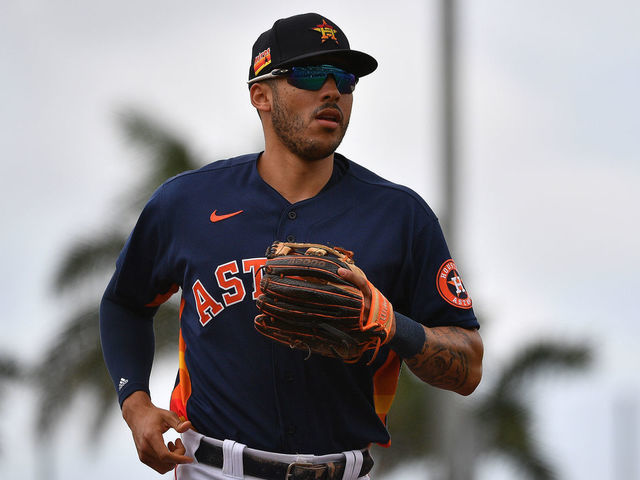 If you told Houston Astros fans they don’t need All-Star shortstop Carlos Correa as the starting shortstop back in 2021, they would’ve spit on your face and said you’re mentally ill.

In the Spring of 2021, there news circling around the Astros franchise shortstop. This season was the final year of contract with the Houston Astros, the team that drafted him #1 overall way back in 2012. Correa’s time with Houston had been pretty solid, even with a couple of down year seasons due to injuries. Owner Jim Crane was willing to give Carlos Correa a six year $120 million contract inevitably giving him $20 million a year. Correa wanted more.

With his skillset, Correa believed he deserved a long term deal that compared the likes of Giancarlo Stanton or his rival shortstop Francisco Lindor. After much extensive talk during the offseason, General Manager James Click failed to find an extension to Correa’s liking. Tons of remarks from Astros fans emerged on social media. Post that read “EXTEND CORREA” grew exponentially.

It’s only natural. Fans have seen key players such as homegrown outfielder George Springer and pitching ace Gerrit Cole leave and sign with other teams. They surely didn’t want to lose Correa. However, at this rate, re-signing him seemed like a pipe dream. 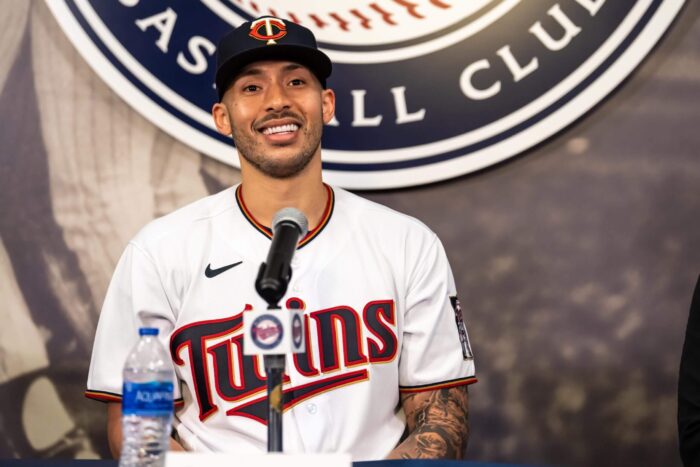 In 2021, Carlos Correa knew he wouldn’t get his preferred contract extension. With this in mind, he then spoke to a young 23-year-old minor league player who was playing in Spring Training for the first time.

“Look at how we work here, look at how we take care of business. Next year this might be you in this position.” Correa said.

“Thank you,” the young shortstop replied.

Following the 2021 World Series loss, Correa pulled the young shortstop aside again and reiterated, “Hey (Name), this will most likely be your team. You’ll be playing shortstop for this team. It can happen. Go out there in the offseason and prepare yourself. Make sure you’re ready to go.”

That young player was Jeremy Peña. 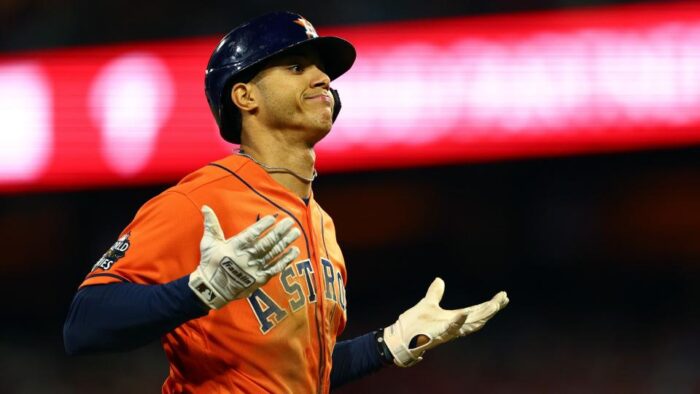 Correa’s replacement didn’t disappoint. Peña started the season as the rookie starting shortstop and never gave it up. Although his season averages weren’t amazing (.253 AVG, 22 HRs, 63 RBIs with an OPS at .715) he turned it up in the postseason, averaging .345 with four home runs and a 1.005 OPS in 13 games. He also led all shortstops in Defensive Runs Saved (DRS), earning him the 2022 Gold Glove Award.

After his first ever walk off home run happened in the month of April, Houston knew he was something special. Throughout the regular season, Peña proved to the Houston Astros fans and team that he has that clutch gene when it mattered.

What about the postseason?

It’s the 2022 offseason, and the Houston Astros are World Series Champs. Aside from the excellent pitching, Houston couldn’t have done it without Jeremy Peña. His regular season clutch gene wasn’t a fluke, as he averaged .345 with four home runs and a 1.005 ops in 13 postseason games.

Some key performances include the solo shot to put Houston ahead 1-0 in the 18th inning of ALDS Game 3 against the Mariners, and a three-run shot to tie the score against the Yankees in Game 4 of the ALCS.

His performances won both the ALCS and World Series MVP. In fact, he was the first and youngest player in the American league to earn both awards in the same year. This beats winning fifth place in Rookie of the Year voting by a landslide.

From an owners standpoint, choosing Peña over Correa was a steal for Houston. Peña is only making $700,000 per year compared to at least $30M a year for God knows how long.

Should Crane have given in and signed Correa to a long term deal, Houston would’ve still had one of the greatest short stops in the history of the MLB. Also there’s still a chance that they would have been in the World Series. However, would they have been able to extend power threat Yordan Alvarez? What about the opportunity to extend Kyle Tucker?

Houston is sitting pretty with the amount of cap space they have this offseason. The roster has the ability to improve and make a return to the Fall Classic. Signing Correa would’ve risked trading a lot of their young talent away for aging players. This would have significantly decreased the longevity and reign in not only the AL west but in the entire league.

It’s worth noting that Carlos Correa was also a postseason hero with clutch moments in nearly every postseason run with the Astros. Let’s see if Peña can match that level of greatness. By the looks of it, he’s already off to a great start.

Untapped Potential: Johnny Knox
Norman Powell Has Been HUGE In His Role