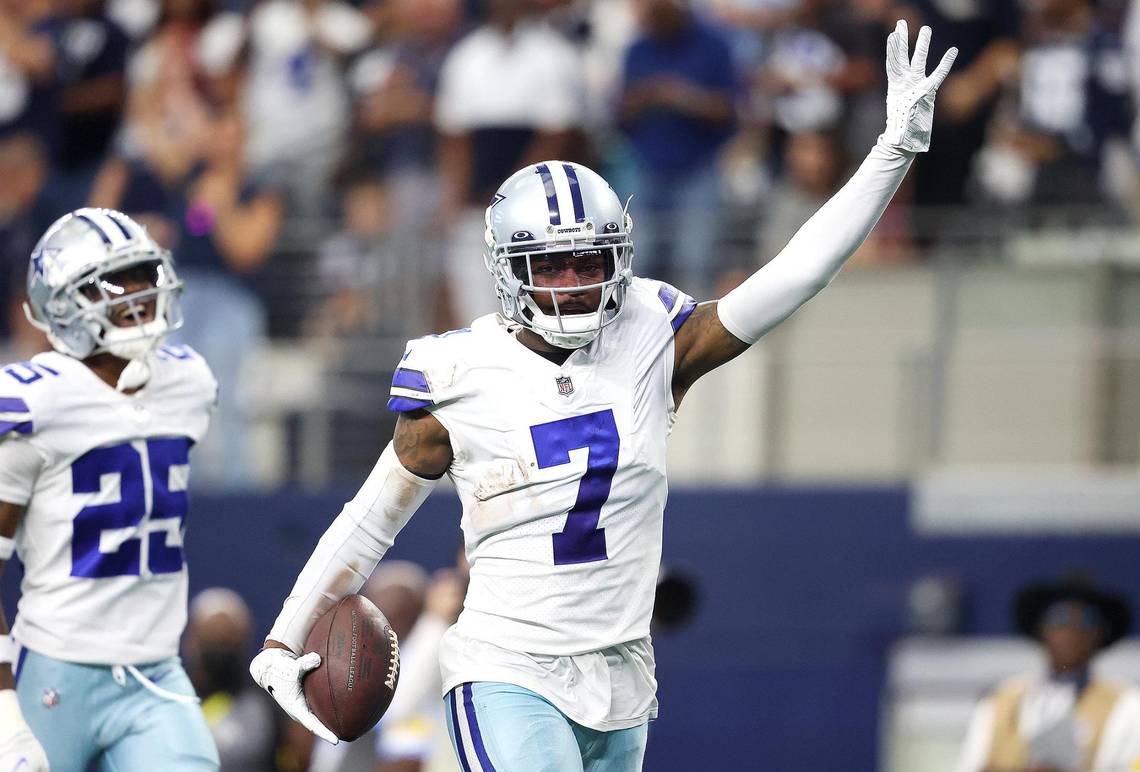 The Dallas Cowboys have improved to 3-1 on the season after defeating the Carolina Panthers 36-28 at home.

The Cowboys handed the Panthers their first loss of the season and improved to 2-0 at home on the year in impressive fashion.

After an evenly contested first half, the Cowboys began to pull away from the Panthers late in the third quarter. They scored 23 unanswered points and sealed the game on a five-yard run from Tony Pollard.

Dak Prescott shined once again, throwing for four touchdowns and no interceptions on 63.6% completion, standing tied for passing touchdowns at third in the league with Tom Brady at 10.

Overall, Sunday’s performance was a great showing for the entire Cowboys roster, which could potentially be the catalyst for a favorable upcoming schedule.

Here’s a look back at some of the highlights of the Cowboys dominating Week 4 win. 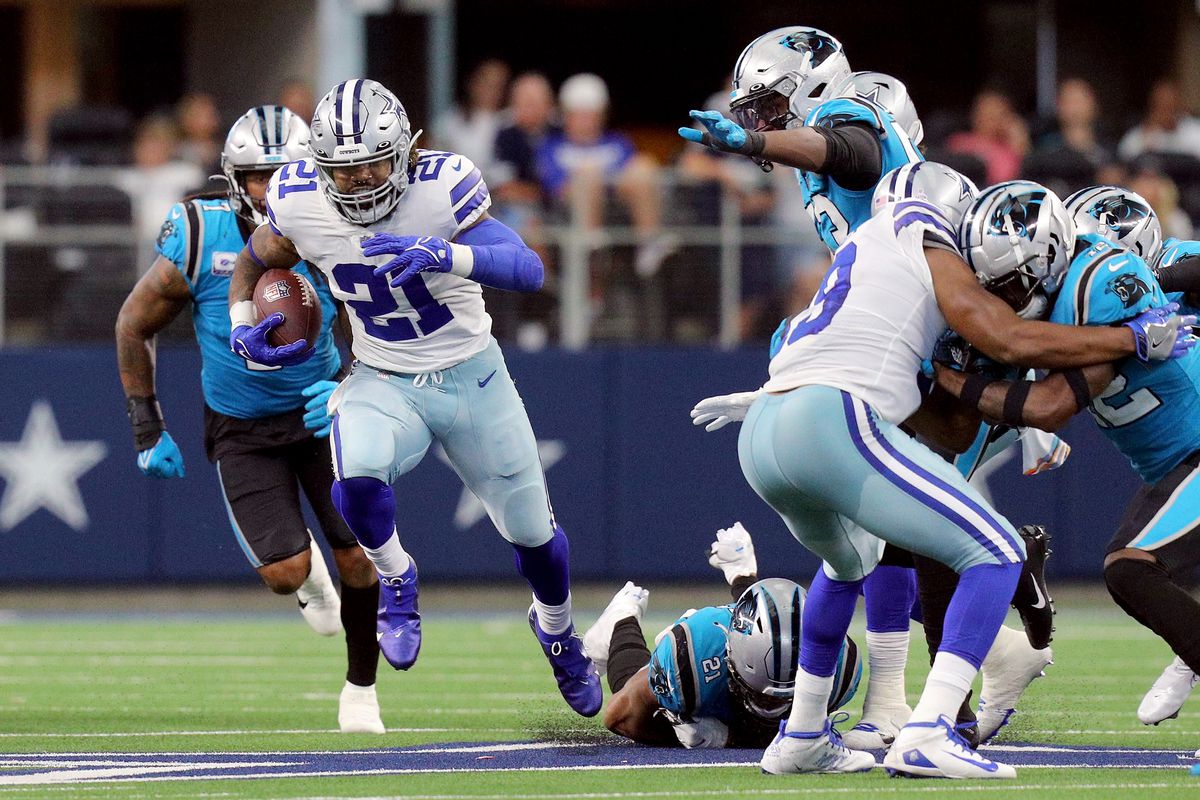 In back-to-back games, the Dallas Cowboys’ offense has looked virtually unstoppable. They dominated the Eagles with 41 points last week, and picked apart the league’s best defense this week for 36.

They also posted their best rushing performance of the year, and it happened to come against the league’s best rushing defense.

Prior to Sunday’s matchup, the Panthers allowed just 45 yards rushing per game and did not allow a single opposing player to rush for more than 20 yards.

The Cowboys did not just simply break this defensive streak of the Panthers, they made a mockery of it. They posted 245 yards rushing against a defense that had not allowed more than 48 all year.

Ezekiel Elliott, Tony Pollard, and Dak Prescott all rushed for above 20 yards, each averaging an impressive minimum of at least 6.7 yards per carry .

Elliott in particular was unstoppable, posting a season high of 143 yards rushing. This was also the 3rd best rushing performance in the league this year, behind Derrick Henry’s 182 and 157 yard performances.

Statistically it may rank third, but Elliot’s performance was arguably the best showing by a running back all year. Having the performance he did against a defense touted as the league’s best is no easy feat, but Elliott clearly found no trouble with it.

Outside of his individual dominance, Elliott’s performance paved the way for Dak Prescott to have one of his most efficient games of the year.

While Prescott had a season low in both passing yards (188) and attempts (22), he adversely posted his season high for passing touchdowns in a single game.

He also had his second highest passer rating of the year at a staggering 130.3, against a defense that had held opposing quarterbacks to a peak of just 93.0.

The Cowboys once again proved they can win football games without relying on Prescott to throw 40+ times a contest. In a league dominated by the pass, this is a nightmare scenario for opposing defenses. 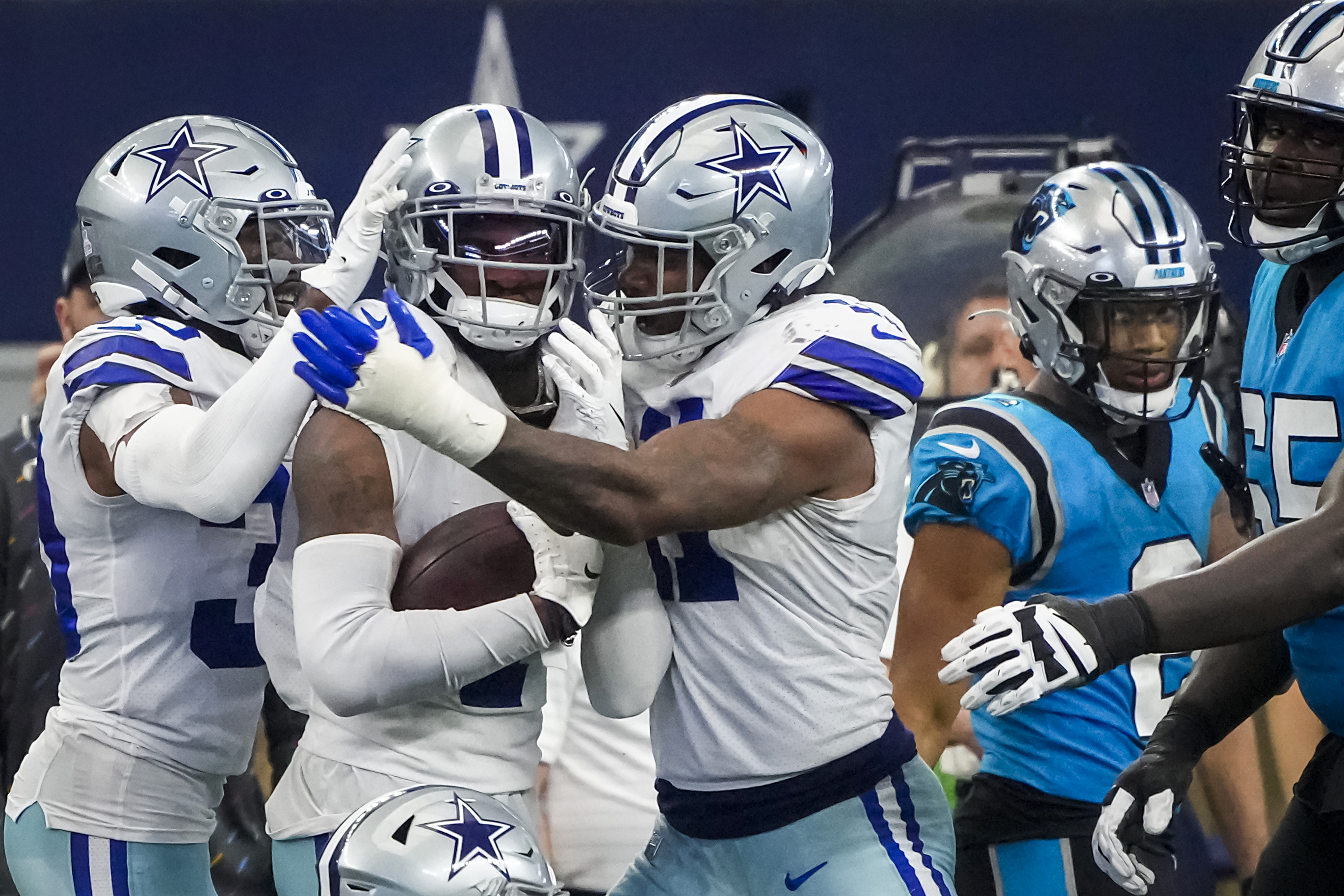 In light of being named NFC Defensive Player of the Month, Diggs followed up winning the honors with a standout two interception performance.

His interceptions were not only crucial to the Cowboys victory, but they also served as a statement to the rest of the league: This defense is not to be taken lightly.

While Diggs has taken headlines and been the face of the Dallas Cowboys’ defense this year, Sunday’s effort went far beyond just his contributions.

Through four games the Cowboys defense is allowing just 24.2 points and has forced the second most turnovers in the league.

While they allowed their second most points in a game of the season, their Week 4 performance marked their 8th straight game with multiple turnovers and 11th straight game forcing a turnover period.

They also posted their season high for sacks in a game with five. Carolina had allowed just 6 the entire season prior to the game.

Randy Gregory and Micah Parsons in particular were at the forefront of the pass rush and were stellar, combining for three sacks, tackled 22 yards for loss and seven total tackles.

The Panthers are among one of the leagues better offensive units, and the momentum carrying from Sunday’s performance bodes well for the Cowboys upcoming schedule.

Here are how the Cowboys next 5 opponents rank offensively:

Outside of the Minnesota Vikings, who are currently 1-3, the Cowboys will be going up against below average league offenses and they need to take advantage of it.

Keep in mind that the Cowboys are still missing their best defensive player in Demarcus Lawrence and their starting safety Donovan Wilson.

If this unit can continue to produce turnovers and compile sacks, there is no reason as to why they shouldn’t dominate their upcoming matchups.