Causes of Concern from the Philadelphia 76ers’ Loss 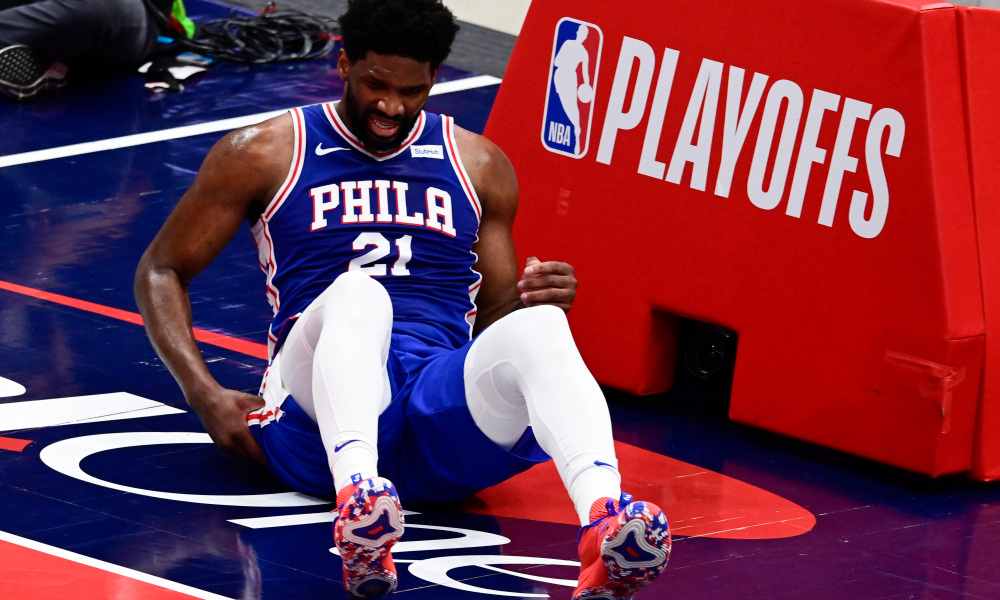 The Philadelphia 76ers failed to complete their sweep of the Washington Wizards, falling 122-114. The loss itself is not really the problem. It’s hard to win four straight against NBA teams, much less in the playoffs and on their home turf. The series hadn’t been very competitive up till this point, and it probably won’t be going forward. The series heads back to Philly and most are expecting a gentleman’s sweep. The loss itself was not a problem. It was the way in which they lost that gives me cause for concern.

Ironically, the three concerns I have stem from the three Philly stars, the same three that had made the series so simple earlier. In game three they shot a combined 29/42 for 70 points, an utterly dominant performance. This game was much different story.

This is an obvious one, but also a multifaceted concern. RIght off the bat the injury itself is concerning. Embiid took a hard fall halfway through the first quarter, but stayed in for the rest of the quarter. He then left the game and was unable to return, reportedly due to right knee soreness. That’s much worse than what the fall seemed to have injured, which was a tailbone or something similar. A potential knee issue is much scarier and longer lasting than a bruised posterior. An MRI is scheduled for Tuesday, and Embiid’s status for Wednesday’s game is in serious question. Embiid is no stranger to injuries, and that in itself is concerning.

The second part of this, which is obviously heavily related to the first, is the team’s performance without Embiid. They aren’t as bad as they were at the beginning of the season (they lost their first four games without Embiid) but still they were just 11-11 without their best player. That’s really not that bad, but considering they went 49-23 overall, half of their losses were when they didn’t have Embiid. Also, the teams they did beat weren’t great. The only playoff team they beat without Embiid was the New York Knicks (technically they also beat the Lakers but no Lebron or Anthony Davis).

It’s pretty clear that while they don’t absolutely need Embiid to beat the Wizards or their next opponent which could be the Knicks, they will get toasted by the Milwaukee Bucks or the Brooklyn Nets without him. No Embiid means they can key in on Tobias Harris, and as we saw today that leads to shaky results, and it also means the interior defense takes a major blow. The amount of alley-oop dunks, put-backs and free drives through the lane the Sixers gave up sans Embiid was troubling to say the least.

Honestly this concern is hardly fair. Harris is allowed to have bad nights, and he had been stellar up until this game. Even in the loss, Harris had to shoulder the majority of the offensive load without much help and did score the team’s most points. Embiid’s injury and Simmons’ foul trouble meant he was keyed in on by the Wizards defense and his efficiency suffered for it, shooting just 33%. To be fair to Harris, he’s been good this season when Embiid or Simmons aren’t around, and anyone would be hard pressed to do well without two of their best three players not available. Think of Giannis Antetokounmpo without the spacing and playmaking of Jrue Holiday and Khris Middleton.

That doesn’t mean it was all sunshine and rainbows. Harris’ game does rely on him taking pretty tough shots to get most of his points. Drives into the teeth of the defense, post up hook shots, post up fades, pull up jumpers, these are some of the most difficult shots to hit night in and night out and they make up most of Harris’ offense. He’s been remarkably consistent with them this season, but if he’s off things can get ugly and it’s up to someone else to carry the load.

Harris failed to score on a few mismatches against smaller players and got blocked a total of six times. It was a bad game from Harris no doubt, one that looked eerily similar to his play during the disastrous Boston Celtics series last year. If Harris is off he can be really off and you have to wonder if more of these games are in store for him as the playoffs continue and defenses improve.

Still though, it’s just one game, and it shouldn’t reflect too poorly on the guy. After game one where he put the game on his shoulders he’s allowed to have a bad game against the Wizards. It’s not a true cause for concern. Yet.

Part of the reason the game was put so squarely on Harris’ shoulders was because his normal two star teammates were unavailable for most of the game. Embiid was due to injury, but Simmons was out because of severe foul trouble. Simmons picked up three in the first half, which limited him to just 10 minutes of action and picked up two more in just 14 minutes of work in the second half. To be fair, Simmons isn’t normally fouling that much, he only had one each in the past two games, but the way that Simmons plays aggressive defense (and offense kind of; he’s very downhill) means if the refs feel like blowing whistles his fouls can really build up quickly. The Sixers’ players were not happy with the refs in this one, with Simmons saying post game “I think we lost our cool with the refs tonight.”

Despite the foul trouble though, the real story of Ben Simmons and fouls from Monday’s loss is Simmons’ foul SHOTS. In the fourth quarter, the Wizards began intentionally fouling Simmons, who had been a dismal 0-9 until this game four. Once they began fouling Simmons with 2:47 left in the game and the score tied, he made three of six and the 76ers had to take the ball out of his hands until after the two minute mark had passed. Simmons was fouled one more time after that and again made one of two. That can’t happen for your point guard. Simmons’ entire offensive game is predicated on him having the ball in his hands. If his foul shooting is poor enough that he can’t be trusted with the ball, that is a major problem.

Once the Hack-a-Ben started, the 76ers got outscored 4-10 before the 76ers had to start intentionally fouling themselves just to save time. Simmons accounted for all four points with his free throws in that two minute span, and you can really see the team’s offense suffer without Simmons to play make (and also him just taking up space standing around).

Advanced stats tell you that as long as you shoot 50% or better, getting intentionally fouled should still be a win for the team SHOOTING the foul shots. Which is what Ben did. The problem is the other stuff besides the pure point scoring efficiency. It’s such a drain on team (and personal) morale when a guy is getting intentionally hacked and he can’t really make the other team pay. It kills the momentum and disrupts any flow you might have had. It’s even worse for a guy like Simmons, who again cannot affect the offense in a meaningful way off-ball and the 76ers lack his elite playmaking. This is felt the most in transition situations, where Ben makes his money, but cannot even touch the ball in fear of getting sent to the line.

Doc is adamant that Simmons is not a problem late in games, and was more than irritated by the questions in post game criticizing Simmons. One of his most inflammatory remarks was “…we’re going to keep Ben on the floor. Unless you guys want us to bench him the whole game, if anybody wants us to do that let me know and then I’ll know you don’t know basketball.” Will he feel that way later on the playoffs if this keeps happening?

What Does This Mean?

None of these problems are that concerning for the 76ers current series, and likely the one that comes after. Harris won’t need to carry the load, Embiid doesn’t need to be 100% and games shouldn’t be close enough all that often that Hack-a-Simmons will be a problem. Even if it is, as long as Embiid can patrol the paint, scoring one point per possession is actually a decent rate as long as you aren’t getting killed inside and on the offensive boards like the Sixers were late.

The problem is the Eastern Conference Finals, or possibly the NBA Finals. An injured Embiid spells utter doom. Simmons inability to hit free throws becomes magnified in the close games against the elite offenses that will kill you if you can’t make a good percentage from the line. Harris’ reliance on difficult shots also becomes iffier as defenses improve and scores get tighter. The 76ers can take one game of 33% shooting against the Nets or the Bucks. Can they take two or three?

It’s Not All Doom and Gloom

To end the article on a high note, there were some positive takeaways. The ascendency of Tyrese Maxey continued, with the rookie dropping in 15 points, second most on the 76ers. He was the spark in the second half that allowed the Sixers back into the game and it has 76ers fans drooling at his potential. Furkan Korkmaz also scored seven points in just eleven minutes. Korkmaz will be used in a similar fashion all playoffs (when the 76ers need to catch up quick) and he displayed his ability to score and, most importantly score, quickly.

Finally, the 76ers showed a lot of fight in this game. It would be easy to just let this game go. They were down late in the fourth, Embiid was hurt, Simmons was in foul trouble, Harris was shooting poorly, they were up 3-0 on the opponents home court, and they felt slighted by the refereeing. Instead, they fought till the bitter end, and a close loss despite all of those factors should honestly give the Sixers confidence that they will end this series cleanly Wednesday night.