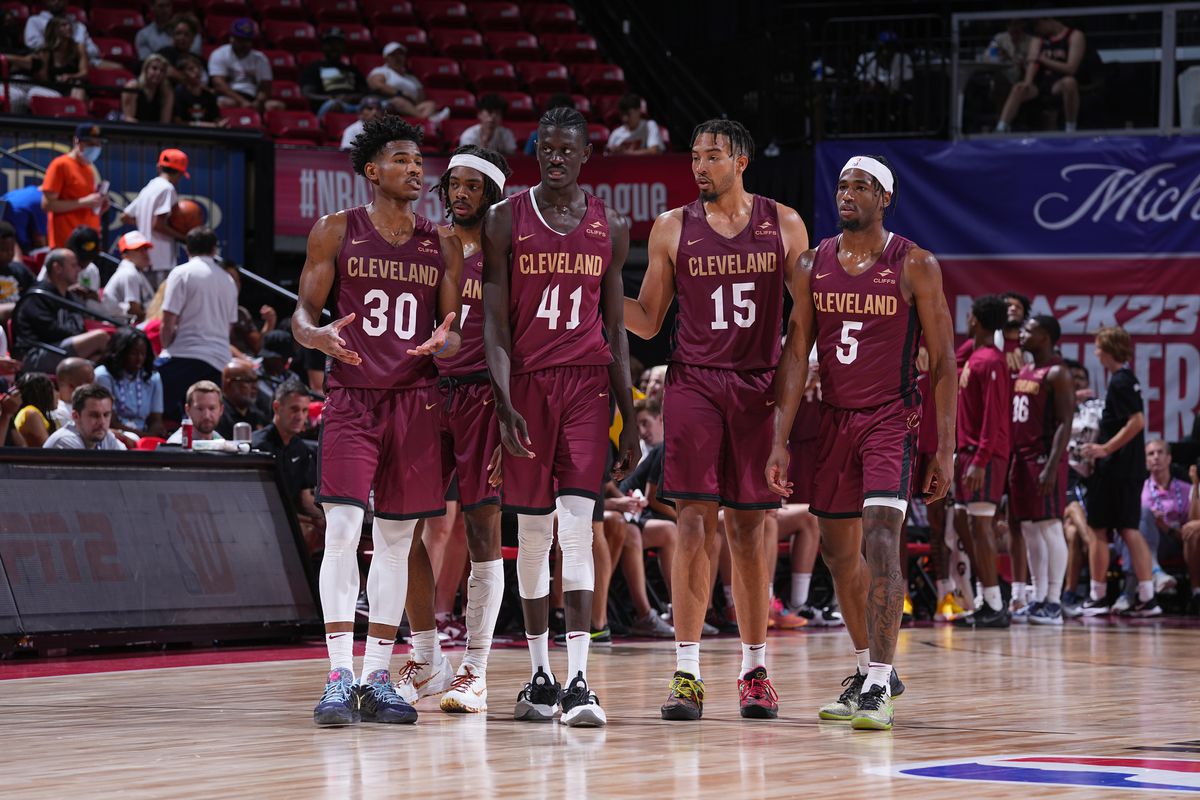 The Cleveland Cavaliers Summer League season has ended, and there were some really encouraging performances, particularly by the rookies. While only one of them really figures to make an impact on the team in the coming season, it wasn’t just Ochai Agbaji that showed a little sumthin’ sumthin’. Luke Travers displayed some potential as an all-around contributor whenever he comes over, Isaiah Mobley looked like he could pick up minutes at the end of the bench, and while not a rookie R.J. Nembhard showed a scoring touch that should get him on an NBA court.

Just What They Needed

So far in his Cav’s career, Ochai Agbaji has been pretty much exactly as advertised. A deadly catch-and-shoot three-point threat, without much else offensively. Sure, that limits his ceiling as a player, but from what he’s shown he will absolutely contribute day one. He shot 37.5% from three on eight attempts per game, which is the volume you want and a decent amount of the accuracy. Not all of the attempts were simple, no dribble attempts either, with many of them coming off the bounce, off both screens and in transition. He even threw in a step-back and a couple of tough fades. He showed a mid-range game as well, and his game is pretty firmly based on his jump-shot (he may not have made a layup all summer league). While in a vacuum that isn’t ideal, it’s perfect for the role he’ll occupy this season and probably most of his career. President of Basketball Ops Koby Altman said he wanted to use Agbaji on screens, and he definitely did that, using them in a number of actions both with the ball and without. Expect to see that a lot.

Defensively, Agbaji didn’t show too much besides recording a few steals. It wasn’t like he was exposed or anything either, and considering he was a major offensive cog for the summer league squad it’s not surprising to see him be nondescript on the defensive end. It’ll be important for him to hold his own at that end in the actual regular season, and he hasn’t shown a lack of ability there in college or otherwise. Overall, Agbaji gave Cavs fans exactly what they were expecting, which is a good thing.

Luke Travers on the other hand, was a pleasant surprise. His numbers don’t necessarily pop out, but he showed off a variety of skills that were quite encouraging. He stuffed the stat sheet in a multitude of ways, piling up blocks (including an impressive four-block performance in his debut), steals, rebounds and assists. He seems to have a good feel for the game, which is one of those unteachable skills, making the right play and knowing where to be offensively and defensively, and he uses his size and length well.

The real question for Travers (who will be a draft-and-stash for this year at least) is what he brings to the table offensively. Picking up a few boards and making a few nice passes will only get you so far in today’s NBA, and Travers doesn’t look like he has a marketable scoring skill yet. The jumper seems slow and he doesn’t really have moves to beat a man off the bounce, even if he does look competent handling the rock in general. Perhaps he comes along defensively enough to earn minutes as a defensive specialist ala Andre Roberson, Tony Allen and Matisse Thybulle, but that’s becoming harder and harder these days. A Draymond-esque or point forward type role would make use of his myriad skills, but again, that requires being an all-defense quality defender and having a specific team around him so it’s tough. Travers is still quite young and has a lot of growing to do though, and if he can weaponize at least one scoring area he can crack the NBA for sure.

Finally, Isaiah Mobley had a similar summer league season to Travers. He did a lot of things a guy of his size should, like get boards and patrol the paint, but offensively there isn’t a ton to write home about, with one exception. Perhaps playing too unselfishly at times, Mobley racked up a surprising amount of assists throughout the summer league, averaging three per game, which considering his usage is impressive. It’s not a fluke either, as he did the same thing in college. If Mobley can nail down the three-ball (he went just 2/16 in the summer league, but shot 35.2% his senior year) he should be able to nab a role as a stretch four with a little extra due to the passing. Overall, Mobley showed enough that making the end of the bench wouldn’t be the craziest thing, especially if it helps his brother Evan feel more comfortable.

Getting What You Paid For

Of the four rookies, only one figures to see any real NBA time, and Agbaji looks exactly as advertised, which is a good thing. Mobley and Travers also showed some good things in the summer league, but at the end of the day the game is, and will always be about getting buckets and both of them struggle with that. If they can develop something on that end, they seem to have a nice enough feel for the game, especially when it comes to assisting others, to make it in the NBA. Finally, while not a rookie R.J. Nembhard does not seem to have that same problem as the previous two guys. He led the summer league Cavs in scoring every single game but one and showed a variety of moves to score with. While three-point shooting wasn’t really one of them, he was able to get to the rim and finish strong, as well as hit a number of tough mid-range shots. Nearly all of his points were unassisted too, and scoring without help is so important in the NBA. That type of scoring is something the Cavs desperately need outside of Darius Garland, so if Nembhard can replicate that in the NBA proper he’ll stick around. Overall it was a successful summer league Cavs, if not particularly spectacular. You saw the things you wanted to see from Agbaji, and no one else looked completely out of their depth, showing enough potential to stick around.

Jarred Vanderbilt: A Man Who Honors His Home City
Will Ty Lue Have the Most to Work With Heading Into Next Season?