Celtics Had This One … and Then, Bam! 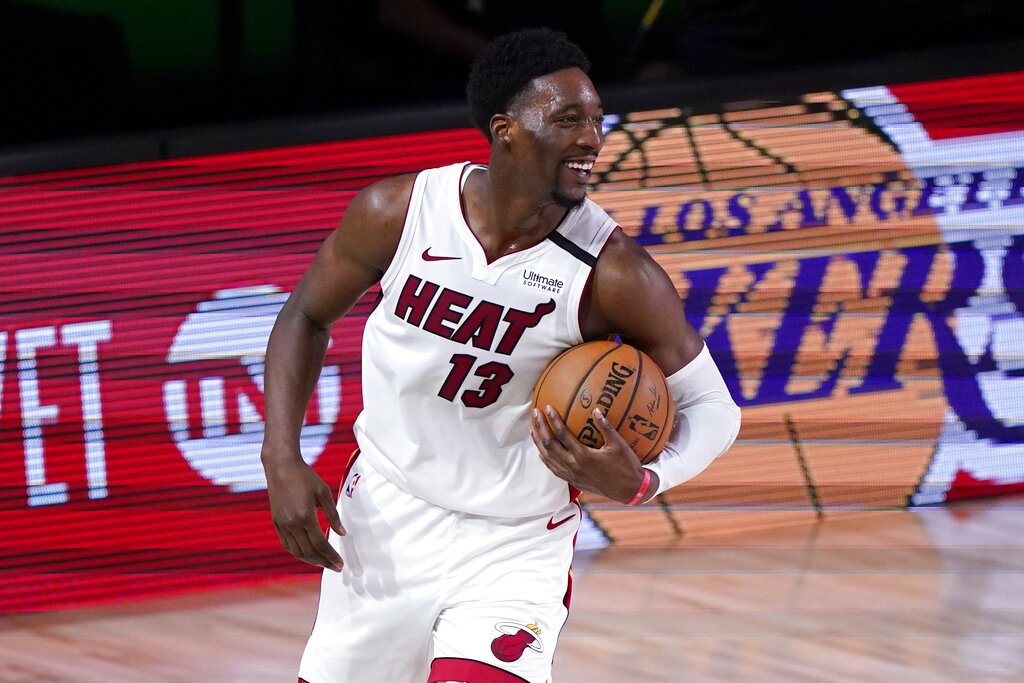 Last night, Bam Adebayo scored 15 of his 21 in an emphatic 37-17 third quarter turnaround, helped the Miami Heat win in Game Two, and put Kemba Walker and the Boston Celtics in an 0-2 hole.

Boston Celtics fans were waiting, calling out on social media, begging for Kemba Walker to show up and be the catalyst for the Celtics that he wasn’t in Boston’s Game One loss to the Miami Heat.

And show up he did, helping the Celtics put the Heat in a 60-47 hole going into the locker rooms at the half of last night’s Game Two.

But after all the hard work they put in through the first 24 minutes, they lost in a 37-17 third quarter that Miami used as their own impetus to catapult themselves past the Celtics and into a 2-0 series lead in the Eastern Conference Finals with another come-from-behind win, 106-101, last night.

Goran Dragic led all scorers with a 25 point night, shooting 52.6 percent from the field. Six Heat players hit double digits with Bam Adebayo going for 21 points and 10 rebounds, and Duncan Robinson shooting 50 percent to get to 18 points on the night. Jimmy Butler came up with 14, getting to the line six times for a perfect six of six, Jae Crowder added a dozen, and Tyler Herro finished the night with 11 points, nine rebounds, and five assists.

Walker led the Celtics with 32 points, while Jayson Tatum and Jaylen Brown kicked in 21 points apiece, making Boston look comfortably ahead in the first half.

But Adebayo was huge in the third quarter bumrush, scoring 15 points while Boston scored 17 collectively.

Boston only shot 33.3 percent in the cold third quarter, but came together enough to put out a 15-2 run to get back into the thick of things. But went cold again as Miami finished the game with a 17-7 run and the win.

Marcus Smart finished with 14 points, while Enes Kanter only hit for nine points and six rebounds. The Celtics shot 50 percent on the night to Miami’s 44, and won the rebounding battle, but were outdone in steals, assists, and points thanks to their 20 turnovers compared to Miami’s nine.

Every time the Miami Heat have been up 2-0 on an opponent in playoff settings, they have come out the victor all 10 times. No reason that narrative should be disrupted, though the Celtics have the chance to break that streak and should make that their personal mission.

You can let your emotions boil over – that’s what young teams do.

But you have to gather them and realize that this ride is like taking a late night paddle in a canoe, with your thoughts and well-laid plans on one end, your emotions on the other, and the fate of your season riding on the razor-thin edge in between.

The canoe is a perfect analogy of how life can be when you honor the timing, rhythms, and harmony. Many times if you allow your mind/ego or thinking brain to guide you, you tend to go off course and struggle ensues.

Past experiences, mental constructs, expectations, and judgments can quickly lead to feeling literally stuck in the water. But recognize what you’re being taught through adversities, make the necessary shifts, and suddenly, the ride seems smooth, effortless almost.

Maintain that balance, and glide past the Miami Heat for four wins out of five games.

Realize that that’s what got you to this point, past Gordon Hayward’s injury, past the COVID-19 adversities, past Philadelphia, and past the NBA Champion Toronto Raptors.

That’s what is necessary to reach the NBA Finals.

Time to look at tape of this game, especially the third quarter, and hope that Hayward’s four week window of healing is complete, and he’s ready to go on Saturday night.

If Boston goes down 0-3, this thing is over and the Heat will have plenty of rest to watch the Los Angeles Lakers – Denver Nuggets series, and prepare to snatch a championship opportunity from former Heat frontman LeBron James.

Down to Four: These Kids Have Dreamed of an NBA Championship
Baker Bests Burrow in Heisman House Rookie Hazing