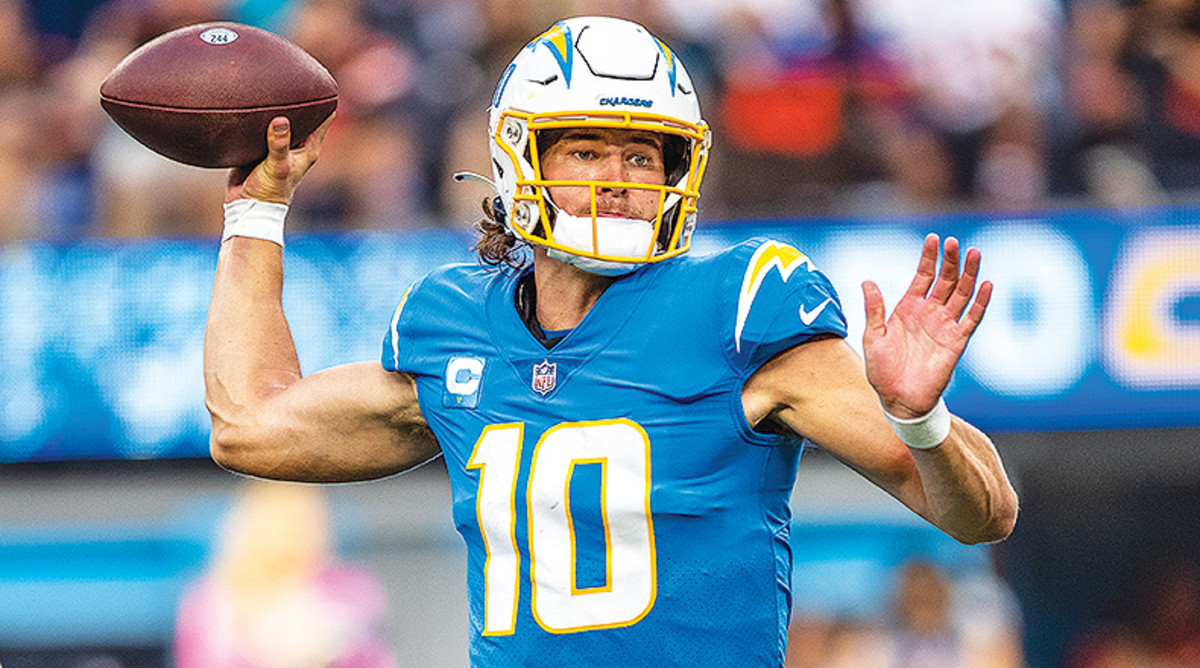 The Chargers beat themselves tonight. This was a very tough game to watch in the second half. The Chargers team that fell short and was their own worst enemy from last year showed up tonight.

After having a strong first half, the defensive adjustments by the Chiefs gave the Chargers’ offense trouble. The Chargers lost Corey Linsley to an knee injury and then shortly into the second half lost Trey Pipkens. Zion Johnson was able to hold his own against Chris Jones. The Chiefs moved him to Matt Feiler and Jones started to make an impact.

The Chargers also failed to keep Justin Herbert clean. He was sacked two times and hit eight. Eight times gentlemen, there is some serious work to do. Towards the end of the game, Herbert looked to be dealing with a serious rib injury. Brandon Staley commented today that Herbert has fractured rib cartilage. Despite the diagnose, Staley also said Herbert is “day to day.”  Going forward the offensive line needs to step up. This was just bad. The offense has more talent than is showing up. Maybe a change in offensive strategy needs to be implemented? If a talent pool like this is going down the same rabbit hole as last year, then the change in approach is warranted. Not every player is intuitive. It is a coach’s job to develop those reflex responses. For a second year if this becomes a marked breakdown in play, then changes need to be made in approach.

2. Offense Departed From What Worked

Mike Williams was having a good game in the first half. The Chiefs’ defense adapted to contain him and the Chargers’ offense stalled in the second half. This left the Chargers with a failure to keep the run game going. This can be attributed to a combination of offensive injuries and defensive adjustments.

Justin Herbert had a major miscommunication that also swung the tide of the game. After a 26-yard catch and run by Gerald Everett, the Chargers were on the one yard line and Herbert threw a pick-six. That play changed the momentum of the game and put the Chargers at a severe disadvantage. After the catch and run, Everett was visibly gassed and needed a breather. However, the Chargers ran to the line and tried to run a play. It was poor awareness. If the Chargers want to make it to the Super Bowl they need to eliminate those errors.

3. Defense Held its Own, but Broke Late

The Chargers’ defense was doing a great job in containing Patrick Mahomes and limiting the Chiefs’ offensive weapons in the first half. The second half followed much of the same, but the strain began to show in the Chargers’ mental mistakes. The Chargers dropped a pick that would have surely shifted momentum back in their favor. The Chiefs then took the ball and scored the go ahead touchdown and never looked back.

Despite falling behind 10 late in the game, the Chargers never gave up on either side of the ball. The offense kept moving along and was able to cut the lead to three. They were unable to recover the onside kick, which took the game out of reach.

Week 2, defensively the Chargers held their own and limited one of the most dominant offenses seen in a week 1 performance. This gave the Chiefs pause and the Chargers were a couple mistakes away from holding the best offensive team in football to 17 points. This Chargers’ defense has promise. It is still early and time will only tell if they can reach their full potential.

The Chargers were without their top wide receiver. Mike Williams stepped it up with eight receptions, 113 yards, and a touchdown. He really kept the offense alive in the first half and showed that he was worth his big offseason contract. Austin Ekeler bounced back in week 2. He was stagnant on the ground only recording 39 yards, but contributed in a big way through the passing game. He caught nine passes for 55 yards. Another solid contributor was former Seahawks tight end Gerald Everett. Everett hauled in six receptions for 71 yards. This team showed the diversity it can have on offense. This will lead to the Chargers being a big threat all around if they can protect their quarterback.

Though it was a frustrating loss, the Chargers faced down one of their toughest competitors. In the weeks ahead, they should be able to perfect their craft and game plan in order to make a deep playoff run. The Chargers have a week and a few days before heading back. There will be some tough workouts ahead.

Week Two Dallas Cowboys vs Cincinnati Bengals: What To Watch For
The Miami Dolphins Go To Baltimore