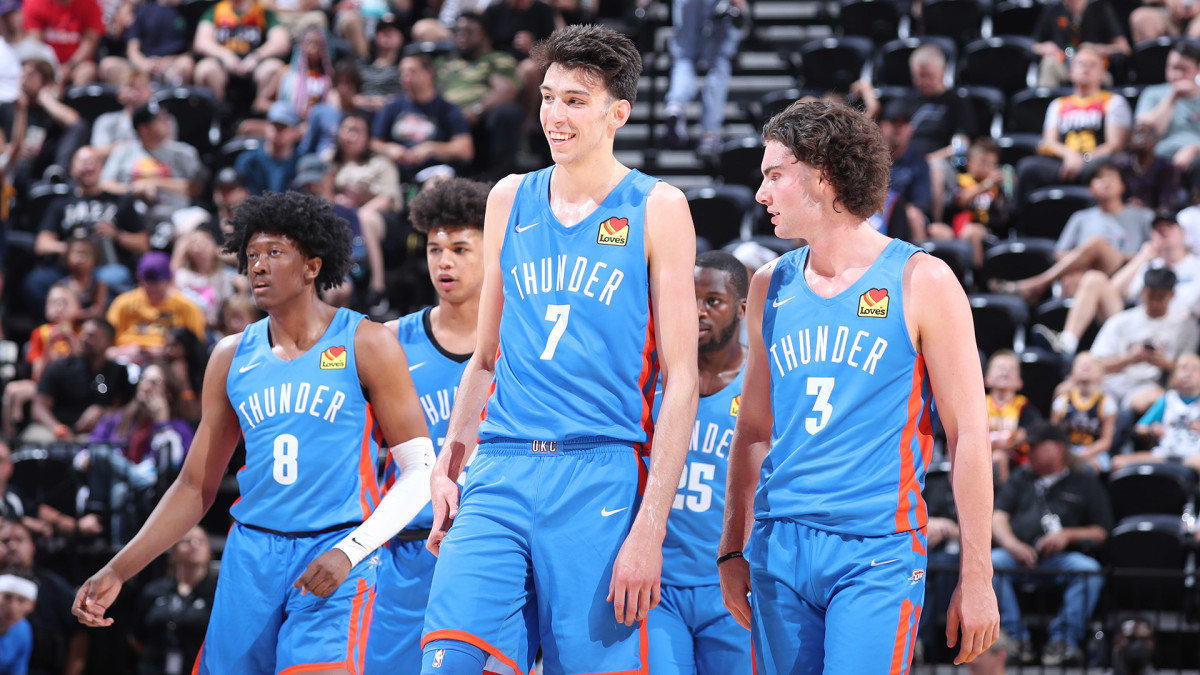 With so much hype around Chet Holmgren, it feels like anything less than an All-NBA career would be a bust for the second overall pick of the Oklahoma City Thunder. And certainly, Chet Holmgren warrants the hype and attention. The 7-foot center from Gonzaga has shown many flashes that point to him being a potential franchise cornerstone. Despite all the strengths he boasts, NBA basketball is incomparable to any other organization. Holmgren’s weaknesses will be exposed by professional players, and the fantasy of a 7-foot center who handles and shoots the ball like a guard while being an elite rebounder and rim protector will be shattered.

Entering into the 2022-23 season, the Thunder have a core of young players that are still raw and developing. Their projected starting lineup will most likely consist of Shai Gilgeous-Alexander, Josh Giddey, Luguentz Dort, Darius Bazley, and Chet Holmgren. Point guard Shai Gilgeous-Alexander, who is coming off a quiet year, will likely remain the first scoring option. With Giddey being a valuable two-way player and Dort providing elite defense, the biggest wild card in the starting lineup other than Chet would be Darius Bazley. Bazley is still a fairly raw player who showed flashes this past season, but his defense is relatively reliable. None of these three players, however, have really solidified a role as the second option. The addition of Chet will certainly be interesting to see, combined with Gilgeous-Alexander’s scoring and playmaking abilities. Holmgren will likely be the second scoring option in his rookie year, with room for his role to increase as the season progresses.

Before the Thunder make any hasty decisions to go all-in on Chet, they must realize the signs pointing to his inability to fit with the NBA:

The most common argument heard from critics is his size. While he stands at 7 feet tall, Chet is only 195 pounds. His frame is skinny and doesn’t possess a lot of muscle. Out of the 30 players who are 7 feet or above, Holmgren and teammate Aleksej Pokusevski (190 lbs) are the only players under 220. Basketball is a physical game, and Chet’s lack of physicality during games has been a concern. He struggles when in traffic and can get bodied easily by larger centers. Since Chet’s play down low relies on finesse, being tossed around affects his scoring in the post. It will be hard for him to box out stronger centers on rebounding opportunities as well.

More concerning, however, isn’t his lack of size or strength; rather, it is his low basketball IQ, even relative to other college prospects. Chet is a very ball-dominant player, but only averaged 1.9 assists per game with the Bulldogs. While not a traditional role of the center, Holmgren’s shooting requires the ability to make plays for his teammates. As a deep threat, he can be utilized as the ball handler on certain plays, which can be very effective in spacing the floor. Even when he is passing, however, Holmgren doesn’t make great reads and has proven to be inaccurate, averaging 3.8 turnovers per 100 possessions. NBA defenses will focus on Chet’s three-point shot, forcing him to either drive or pass to an open teammate. With his inability to effectively slash, Chet will need to improve his passing abilities to facilitate ball movement.

Even with everything that’s been said, the most troublesome aspect of his game is defense. On a surface level, his 3.7 blocks per game place him 4th in Division 1 Basketball. His 3.1 Defensive Win Shares and 7.5 Defensive Plus/Minus are good for 2nd in the NCAA. (Chet led the WCC in all three categories and won the WCC Defensive Player of the Year award.) Most people tout his defense as one of the best aspects of his game.

These advanced statistics are very misleading. If you take Chet outside of the paint or the low post, he proves ineffective on defense. He’s simply not fast enough to keep up with explosive guards or even undersized forwards. His defensive play style resembles that of Rudy Gobert’s, who is a great rim protector but lacks versatility. Watching his game, Chet tends to camp in the paint a good bit, courtesy of the lack of a defensive 3-second rule in college. Professionally, he will need to adjust and be constantly moving around which will affect his rim protection. Another point to make is that Chet plays reactive defense. Much of his defensive switches occur in reaction to an offensive play. In the NBA, players anticipate decisions even in the fast-paced game, and Chet’s subpar reaction time will hurt him.

Chet will be, by far, the most scrutinized rookie this upcoming season.  If the pressure doesn’t get to him first, his game will cause his downfall. There have been many comparisons to Kevin Durant, Kristaps Porzingis, and even Giannis Antetokounmpo, but a better comparison would be Anthony Bennett. His game is too slow for the NBA and while he is a good shooter, there are too many flaws in his game that will come back to bite him as a professional. While he can certainly develop, before the end of his 3rd year, I see the Thunder benching Chet in favor of a better player. His game will simply falter at the higher level en route to being the biggest draft bust in NBA history.