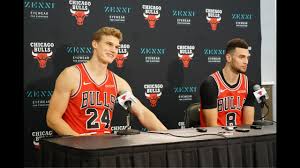 It wasn’t so long ago that the Chicago Bulls appeared to be headed to another period of sustained excellence, under the leadership of Derrick Rose. Even after injuries led to Rose’s decline, it looked like Jimmy Butler would be the one to lead Chicago back to postseason relevance. Unfortunately, that didn’t work out, either. Since Butler’s departure the Bulls have been foundering, desperately looking for an identity and a leader, a search that continues on the eve of the 2019-20 preseason.

“Two seasons ago we lost to Boston [Celtics]  in the playoffs in six games in April. From that point forward we made many changes to the roster and staff,” explained team president John Paxson. We have revamped this roster in a big way. I look at this team and I see real talent, a versatile roster, depth, and leadership which we haven’t had. We feel good about the direction we are heading. We like our talent level and we like who we have in this building.”

If there’s someone who knows a thing or two about building a winning culture, it’s new head coach Jim Boylen. Boylen was an assistant coach under Rudy Tomjanovich when the Houston Rockets won their two championships, worked under legendary coach Jerry Sloan with the Utah Jazz for two seasons, helped Frank Vogel take the Indiana Pacers to the Eastern Conference Finals, and won another championship with Gregg Popovich and the San Antonio Spurs. Few coaches other than Popovich himself have had so much experience with winning cultures.

Boylen has been on the coaching staff in Chicago since 2015, but now takes the helm as the head coach of a team desperately in need of swift changes. He’s very optimistic after the moves the team made over the offseason.

“I want to compliment (GM) Gar (Forman) and John (Paxson) for doing an amazing job in free agency and the draft process,” said Boylen. “Our goal was to keep our young core together and add veteran skill level, toughness, and leadership. We wanted a roster that was versatile and have guys that can start or come off the bench. We wanted guys that cared about winning and that is what we are building. We have built the team now we have to become the team.”

First and foremost, Boylen wanted to assemble a coaching staff that he felt confident could develop his young players so that they can realize their potential, both individually and collectively. To that end he added Chris Fleming and Roy Rogers to an already solid cast of assistants over the summer.

“The number one thing that came up was that I wanted guys that can teach,” said Boylen. “I think teaching is a lost art at our level. There is more teaching that goes on at an NBA practice than any other level of basketball. We have been able to accomplish this goal.”

The Bulls ranked 27th in the NBA in team defense last season, while also ranking 27th on the offensive end. Clearly the Bulls have a great deal of work to do, and Boylen has a firm grasp of which areas need to be targeted.

“We want to play faster and get better at playing in a multi-handler system,” Boylen explained. “We have to run for 48 minutes. We want to be a solid and good defensive team. We have to do a better job with our deep drive decisions and have better spacing.”

The work doesn’t begin with training camp, either, as several revealed the work they’ve put in over the summer to help accelerate the team’s growth.

“I did a lot of work in the sand to keep the impact off of my body,” said Zach LaVine, who appeared in 63 games last season and just 42 the year before. “I want to be able to play all 82 and even more in the playoffs.”

Lauri Markkanen will be largely responsible for anchoring the team’s front line defense, and admits he has targeted areas of improvement and gotten after it.

“I’ve worked to become a two-way player by working on my defense,” said Markkanen. “I think that is the key to success. In order to improve my defense I have played a lot of one-on-ones, watched film on my footwork, and get into the mindset of not wanting the other player to score on me.”

Next to Markkanen in the front court is second-year center Wendell Carter, Jr. He had a less than stellar rookie season, but had offseason surgery to repair a long-standing core muscle injury.

“I boosted my confidence this summer,” said Carter. “I found out who I am and my identity. I feel like I am a really good defender and that I am going to be even better this year, especially after the surgery being able to move laterally a lot better. Offensively I’m just more confident. I am going to be more aggressive on the offensive end.”

With so many young pieces in place, the Bulls have plenty of struggles ahead. That being said, with a clear, unified vision from the top, a coaching staff that understands how to teach and develop young players, and a group of determined young players, there should be significant progress for Chicago.

Bill Ingram contributed to this article. @TheRocketGuy on Twitter.

It’s Pre-season, but the Lakers are Looking Rather Dangerous …
Chicago Bulls Rookie Spotlight: Reason for Hope