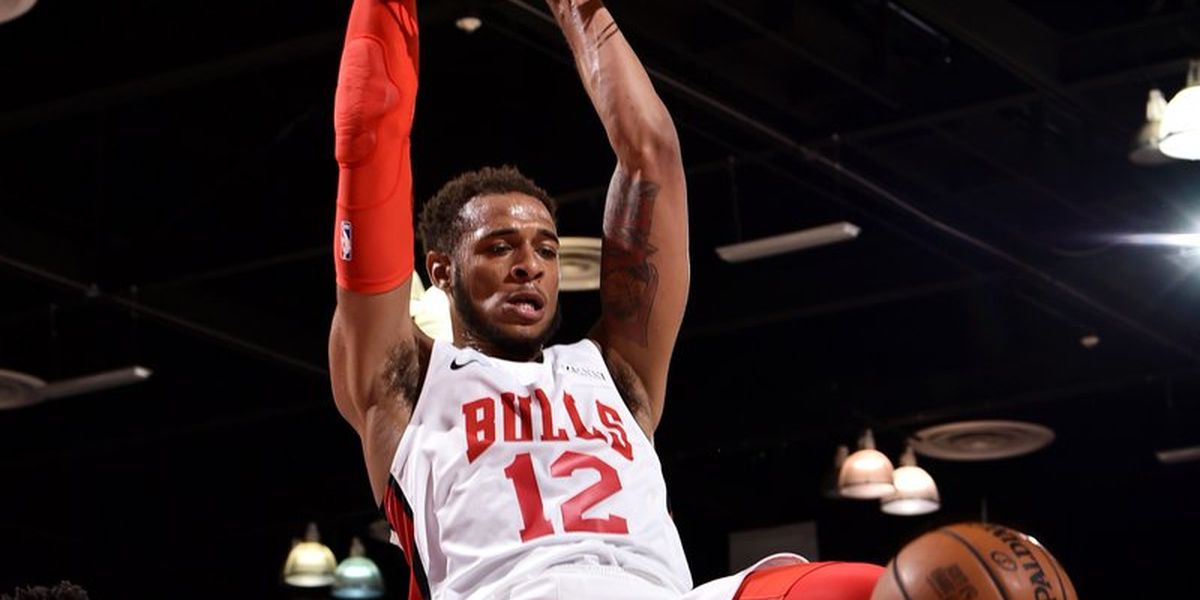 On Monday September 30th, during the Chicago Bulls media day, BackSportsPage had the pleasure to speak with two of their young players. Rookie forward Daniel Gafford, 38th overall pick in the draft, and rookie guard Justin Simon, undrafted free agent spoke about their journey to the NBA. Their paths to the Bulls were different, but they have some of the same goals that they want to accomplish this season.

“It’s been a big transition,” Gafford told BackSportsPage. “In Arkansas you see mainly trees by it being a country town. But Chicago is a big city with a lot of buildings. Making the adjustment was big for me because there are a lot of things that I am not familiar with. So far I am liking the city a lot.”

Gafford balled out during his time with the Arkansas Razorbacks. During the 2018-19 season he led the SEC in field goal percentage (.660), ranked fourth in the SEC in scoring (16.9 points per game), second in rebounding (8.7 per game), and third in blocks (2.03 per game). While he put up good numbers in college, Gafford acknowledges that the NBA is a different beast.

“In the NBA the court is more spaced out and big now so anything can happen. Also the game is a lot faster,” expressed Gafford. “The main transition is that I am getting paid for it now.There are a lot of rules you have to atone to be able to make it in this league both on and off the court. You have to make sure you build your character. The process of building your character begins in college, because you have to make sure it is where it needs to be when you get to the league.”

Due to his stellar play during his collegiate career Gafford accumulated a multitude of accolades. He was an 2019 AP All-American Honorable Mention, 2019 First Team All-SEC, and 2019 Kareem Abdul-Jabbar Award finalist (this award is the Center of the Year in collegiate basketball). His college accolades are impressive but he still needs to prove himself in the NBA. He understands that a growth mindset is what separates the ok NBA players from the super-stars.

“I’m working on being the best player I can be,” said Gafford. “I have to make sure I continue to work on my craft day in and day out. I have to come in and work on moves so I can expand my game further out of the paint to ensure I can last long in this league. Once I do those things, maybe I can have a run at being a Hall-of-Fame player.”

The Bulls drafted the 6’ 11” forward because of his freakish athletic ability and paint dominance on both ends of the floor. What he brings to a team is quantified by his high field goal percentage, relentlessness effort on the boards, and his willingness to protect the paint on defense. He had a special message to relay to Bulls fans.

“Bulls fans can expect a lot of dunks,” said Gafford. “If they throw me the lobs imma go get them. That’s the thing with me, you can throw it up how high you want to and I will try my best to go get it. Fans can expect a lot of energy from me. I will give 100% effort every time that I’m on the floor no matter how tired I get.”

Simon’s journey to the NBA is different than his teammate Gafford’s journey. He had to prove himself worthy of a roster spot during the Summer League. He shot 52% from the field (third highest on team), averaged 6.8 points, four rebounds, 0.8 assists, 1.4 steals (tied for third highest on team), and 0.6 blocks per game (second highest behind only Gafford on the team).

”This process has been great for me,” said Simon, smiling. “Actually, I was with Chicago for Summer League and during that process I didn’t know where I would end up. After Summer League I was waiting to see which team I would be with. When my agent called and said that Chicago was interested in me and that this could be a destination for me; I was really excited because I was hoping that this would be the spot I ended up at. The fact that everything worked out the way it did is great. Since I’ve been here we have been going at it during workouts and playing pick-up. It’s a great culture here and I love it so far.”

The Bulls clearly value Simon’s defensive toughness. Simon having the third highest steals and second highest blocks on the team during the Summer League was no fluke. During his time at St. John’s, he won the Defensive Player of the Year Award in the 2018-19 season. He also understands that he has to improve on his weaknesses if he wants to have a long career in the NBA, so he pledged to not become complacent now that he achieved his dream of playing in the NBA.

“Some of my goals is to improve on my weaknesses and the things that I need to work on,” Simon revealed. “I do this for a living now and not just going to school anymore, I’m a professional. I have to really dedicate myself to this and work on my craft everyday on and off the floor. I have to make sure my body is right, make sure I’m eating healthy, and working on building my game. I have to treat every moment on and off the court like it is my best business move.”

Simon’s humble start to his professional career makes him appreciate the game he loves to play a little bit more. He added that, “Giving back has always been a goal of mine, whether it be a message, donate, or dedicate something towards the community of Chicago or California where I am from. I have always wanted to be in a position to give back, now that I am on the stage to do so I am going to take advantage of it.”

Gafford and Simon have the potential to impact the Chicago Bulls for years to come. Eventually these young players will grow on Bulls fans, because of how hard they are going to play the game.