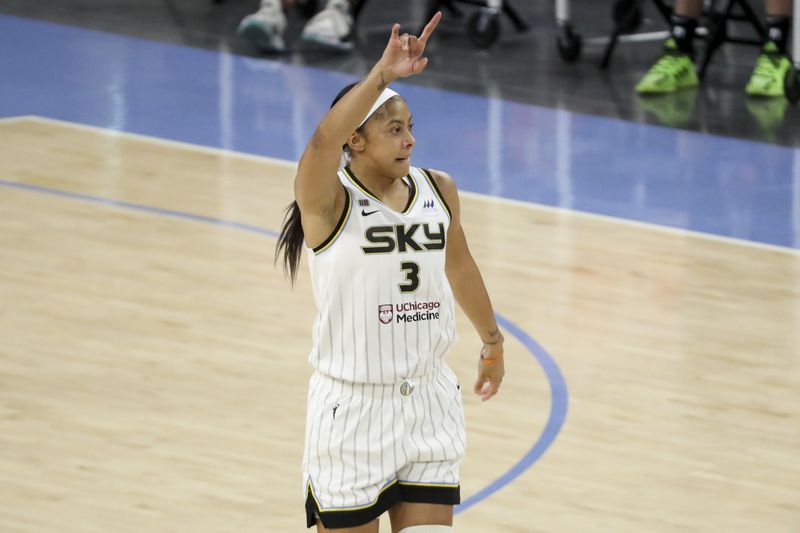 The Chicago Sky won their first game in 22 days against the Indiana Fever on Wednesday.

The combined 44 points from guards Kelsey and Tiffany Mitchell weren’t enough for the Fever (1-10) to push past the Sky.

Chicago’s (3-7) sky-high preseason expectations had taken a drastic turn before its game against the Fever. After starting its season with two statement wins over the Atlanta Dream (4-5) and Washington Mystics (4-5), the Sky dropped its next seven matchups. While the Sky managed to stay competitive in that stretch with an average point-margin of six points, the loss of Two-time WNBA MVP Candace Parker was simply too much for the Sky to close out games when it mattered the most.

Parker made her Wintrust Arena debut after a sprained ankle she suffered in practice last week sidelined her for eight games. The forward grabbed five rebounds and blocked two shots in 18 minutes on the floor, taking rebounding pressure off bigs Stephanie Dolson and Ruthy Hebard. Dolson ended the game with six rebounds of her own, while Hebard ended with nine.

The Fever came close to overtaking a sputtering Sky offense in the third quarter, coming within four points after going on a 12-point scoring streak. Guard Courtney Vandersloot found ways to push right back, scoring four points and dishing an assist to push the Fever back in the Sky’s rear-view mirror.

Though the return of players like Parker played a contributing role in the Sky’s victory, Chicago was able to iron out some of their most glaring deficiencies in their matchup against the Fever.

Executing on the Right Plays

The Sky’s season had been littered with the wrong executions of smartly-called plays.

Chicago’s roster has the IQ and experience to continuously find ways to get themselves open for high-percentage shots. Vandersloot, who currently leads the league (71) and ranks fifth in WNBA history in assists (1,905) has had a history of finding the right players at the right time and feeding them the passes they need to score an easy bucket.

Chicago was making the right decisions on offense. Somehow, they still found ways to be wrong. Chicago ranks ninth in the WNBA in three-point percentage (32.4%) and dead last in field goal percentage (39.0%) while averaging the most turnovers in the league (17.6) according to the WNBA.

On Wednesday, the Sky flipped the script.Chicago averaged a season-high in field goal percentage (45.1%) and assists (24) while shooting 90.5% from the free-throw line on 21 attempts.

Having the combined playmaking of stout veterans in Parker and Vandersloot allowed for more opportunities for the younger breakout players in guard Deshields and forward Kahleah Copper to push past their own sky-high expectations. Both players combined for 18 points, nine rebounds, seven assists, and a +/- of 26.

Chicago’s biggest stars found ways to shine through when the team needed them the most, keeping an ever-present Fever team at bay with efficient scoring and pin-point passing.

Vandersloot continued to feed her teammates at the perfect moments, racking up nine of the team’s 24 assists. She added 17 points on 50% shooting and grabbed two steals on top of her passing clinic, sinking all four of her and-one free throws.

Five players scored in double digits, with three of them being starters. Guard Allie Quigley, who came off the bench, still found a way to have a heavy impact on her team and score 10 points on 50% shooting.

The dynamic between Chicago’s veteran players with DeShields and Copper continued to improve after playing heavy minutes together throughout the season. The two guards, along with Hubbard and center Azura Stevens, continue to break career highs and find ways to fill the stat sheet with the absence of Parker and other key teammates. DeShields is averaging a career high in assists and free throws per game, while Cooper is averaging 30+ minutes and 14+ points per game for the second time in her career.

The Starters Caught a Break

The absence of Parker left the team scrambling to find a solidified rotation without her.

The starters had played an average of 31 minutes per game over their seven losses, with guard Diamond Deshields playing 44 minutes in an overtime game against the Los Angeles Sparks. Three Sky starters placed in the top-15 of minutes played per game, according to the WNBA. Breakout forward Kahleah Copper currently leads the team in total minutes played with 334, the fifth highest in the league.

The return of Parker and other key pieces on offense allowed Chicago to improve its depth and use a 10-man roster with an average of 20 minutes played. The difference in rotational usage allowed for major improvement on the stat sheet, with the Sky shooting 10% more efficiently and dishing nine more assists than their previous game against the LA Sparks.

The Sky will only be missing center Astou Ndour after she was suspended on Jun. 8 when they face the Fever again tomorrow at 1 p.m. Ndour is averaging career highs across the board, scoring 10.1 points and grabbing 7.6 rebounds in 24.3 minutes per game.