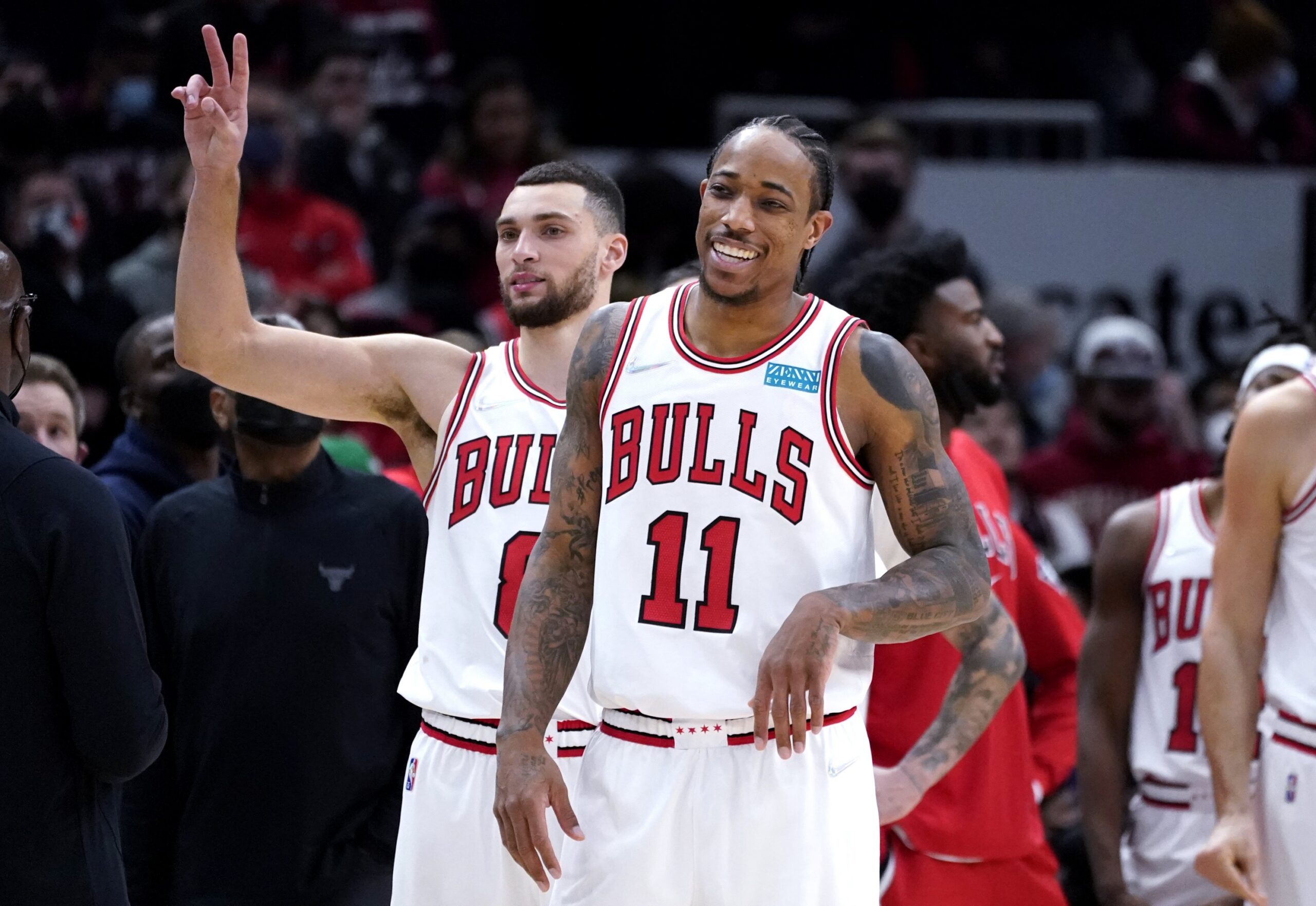 Round one of Chicago’s playoff saga started off stronger than any basketball fan could have expected for this Bulls squad.

Fresh off three sign-and-trades that saw the Bulls push in almost every chip they had for guards DeMar DeRozan and Lonzo Ball, while adding a multitude of key role players in forward Derrick Jones Jr. and Tony Bradley, Chicago wasted no time working off the mistakes of the prior season in an attempt to catapult itself into its first postseason appearance since the “Three-Alphas” era in 2017.

Media outlets across the nation predicted the Chicago Bulls would land in the middle of the conference, or as far down as the play-in tournament, with little room to rebound from a seemingly inevitable collapse should their all-in bet for a playoff push fall through.

“You could argue that (now Toronto forward Thaddeus Young), who will cost $14.2 million next season, contributes more to winning than DeRozan,” Buckley wrote. “It’s at the very least debatable, which just further shows how poorly Chicago mismanaged the summer’s worst signing.”

Even as they were down a multitude of first-round picks, and with questions of team’s chemistry and defensive cohesion looming just weeks before the start of the season, it seemed every negative prediction couldn’t have looked more wrong by their very first game. Chicago fans could only watch in awe as the Bulls exploded into one of the top spots in the Eastern conference despite a lengthy injury from then-second-year forward Patrick Williams just four games into the season.

Chicago’s season seemingly took a nosedive after ten players received positive COVID-19 tests and missed portions of the regular season. The Bulls could never find the rhythm they had built in the season’s first half, going 18-22 in their final 40 regular season games after starting 27-15.

After a long offseason of retooling and regrouping, the Bulls will have no choice to brace themselves for one of their most important second chances in recent memory. The success of the Bulls in this year’s regular season, and eventually the playoffs, will likely be the ultimate determinant of whether Chicago will need to undergo yet another rebuild or if they can continue to build around the core it has already spent so much on.

While Chicago has the players and the coaching staff to be able to continuously make playoff appearances, should it not make it past the first round in any one of them, it likely won’t have the ability to trade its players and start over as they have in year’s past. The Bulls do still have pick swaps, an eye for late-round draft talent and the young but promising players needed to build a solid future, but will it be enough to justify the roster overhaul of year’s past?

Chicago will have to answer these questions and more after they push themselves from their ringside break and ready itself for round two of its fight for the playoffs and what will hopefully be its first run for the O’Brien trophy since 1998.

With Ball’s status still in the air after undergoing surgery for a torn meniscus in late January, Chicago will likely have to look its most recent signee in Goran Dragic to fill the starting point guard spot and be a fourth scoring option behind All Star guard Zach LaVine, DeRozan and scoring center Nikola Vučević.

If the knee injury Dragic suffered in a game against the Serbian National team turns out to be worse than expected, Chicago will likely have rely on its rising hometown sophomore in guard Ayo Dosunmu or a former Los Angeles Laker in guard Alex Caruso to carry increased on and off-ball playmaking duties, as well as facing off against some of their opposition’s best shooters on defense.

While the Bulls’ point guard rotation became all but solidified by its playoff battle between the Milwaukee Bucks, Chicago’s newest rookie addition in guard Dalen Terry will likely see minutes at either guard position should he continue to build upon the increased scoring confidence and NBA-level perimeter defense he showcased in the Summer League.

Though injuries have caused uncertainty at the point guard position for Chicago, the Bulls are lucky enough to have the depth, experience, versatility and willingness to do whatever it takes to win needed to place a reliable option at the one whenever the need arises, factors that all led to the Bulls trading for Ball last offseason.

“We have to do what it takes to win,” Ball told the Athletic’s Darnell Mayberry in a midsummer interview. “For me, sacrificing is all about winning. We have a lot of different guys who can do a lot of different things, but every night is going to be different.

“For me, (winning) means staying focused on the task at hand, whether it’s shooting or not shooting, playing hard every night and picking up the slack on defense. Whatever it takes to win, that’s what sacrifice is to me.”

Between DeRozan, LaVine, Caruso, guard Coby White and guard-turned-power forward Javonte Green, the Bulls will enter next season with one of, if not the highest, shooting guard payrolls in the NBA. Chicago will spend about $82.66 million between five listed shooting guards, or about 56% of the team’s total salary. LaVine signed a five-year, $215 million with Chicago with a player option in the final year, the largest contract in franchise history.

Chicago’s heavy spending on guards in the previous two offseasons, especially the shooting guard spot, garnered mixed results this past season: What Chicago lacked in rebounding ability, finishing in 28th last year with 42.3 rebounds per game, its increased ability to move the ball around the floor, coupled with reliable 3-point shooters and excellent perimeter defenders in Ball and Caruso, allowed for a more dynamic, free-flowing offense than year’s past under head coach Billy Donovan and offensive coach Chris Fleming. At least two of these shooting guards, DeRozan and LaVine, are likely to find starting roles and repeat All Star selections for Chicago should they continue their stellar scoring from last year.

The starting four spot will continue to be LaVine’s to lose: His 24.4 points per game and a near-career high in 4.5 assists per game alongside DeRozan proved to be a key factor in Chicago’s ability to stay afloat in the season’s second half.

“I want to continue what I helped start here as well. I’m extremely excited. I appreciate the fans. I’m ready to continue this winning process that we have going.”

Though listed as a power forward on Basketball Reference and having a decade’s worth of experience as a two-guard, DeRozan will likely take the starting small forward spot alongside LaVine at the two. DeRozan did play a majority of his Spurs tenure at the power forward spot as San Antonio experimented with four-guard lineups. The four-time All-Star and two-time All-NBA guard scored 21.6 points, grabbed 4.2 rebounds, and dished a career-high 6.9 assists in his final season with the Spurs.

The Bulls will likely keep the same rotation they had last year after only adding one more option in rookie Dalen Terry. Expect DeRozan to be heavily involved in playmaking and distributing roles while remaining reliant on the midrange and close-up shots for a majority of his points.

Jones Jr. could take either forward spot if need be, but expect a 6-foot-7-inch rookie in Terry to find minutes here as well. Terry’s perimeter defense and strength for his size, as well as the playmaking ability he showcased in college, make him an ideal fit for the one to three spots on Chicago’s roster.

Besides a 6-foot-7-inch starting forward in Williams, Chicago’s power forward options did not, and again will not, exceed a height of 6-feet-5-inches.

The Bulls started Green and subbed in Caruso and Jones Jr. for a majority of the season after Williams’ injury, a move that proved to be detrimental in Chicago’s ability to stop forward Giannis Antetokounmpo and deter the Bucks on the boards in Chicago’s first playoff series since the 2016-17 season. The Bucks averaged 51.8 rebounds in five games, while Antetokounmpo averaged 13.4.

Even as Tyler Cook and Malcolm Hill stand at 6-feet-8-inches and 6-foot-6-inches respectively, the two reserves will likely have a tougher time seeing the floor with the four to five established NBA veterans ahead of them in the depth chart.

Though Williams has proven to be a reliable help defender on the interior, the Bulls will have to rely on their veteran centers to grab boards and take a majority of work on defense in the paint. Look for Chicago to use the athletic ability of Jones Jr. and Green to provide a good mix of help on the interior and effective outside defense to continue to close the gaps on the perimeter with their three-to-four guard lineups while holding off some of the league’s best post players just enough for a reliable all-around defensive gameplan.

Even with the signing of veteran rebounding center Andre Drummond, the center spot seems to be a lock for Vučević for the second straight season. Despite taking a dip in scoring last season as he played alongside DeRozan and LaVine, averaging his lowest amount of points per game since the 2017-18 season, Vučević’s rebounding ability will have to be on full display should Chicago’s four-guard lineups succeed against the league’s best, and tallest, teams.

Drummond provides a decade’s worth of experience and glass-cleaning potential to a team in desperate need of extra rebounding. The Bulls ranked 28th in total rebounds per game with 42.3 and second-to-last in offensive boards with 8.7. Only one Bull averaged more than 5.4 rebounds per game in the regular season.

Though it will be difficult for either Bradley or Simonovic to make a name for themselves and get adequate playing time at the five, both have seen time on the floor for Chicago and have almost a full year each as Chicago Bulls. Simonovic also spent time with Terry in the team’s Summer League run, leading the Bulls to a 4-1 record after scoring 15.1 points, grabbing 8.8 rebounds and dishing 2.0 assists in all five games.

Chicago’s most critical question may not be answered by the end of the offseason, or even by next year’s playoffs.

Will the Bulls front office be content with merely making the playoffs on a consistent basis while providing a fun regular season year-round? Or will more roster moves come in the future that sends Chicago to its sky-high potential or to the top of the lottery?

As more teams trade away their star players to playoff caliber teams in exchange for a king’s ransom of picks and young players, and with the 2023 NBA draft featuring a prospect unlike any the league has ever seen in center Victor Wembanyama, the Bulls may find themselves unlikely to do either should teams be unwilling to trade for DeRozan or Vučević or should they not be able to find the talent needed to compliment them enough for a championship run.

Either way, the creativity, versatility and playoff experience of this Chicago Bulls roster, as well as the chip on their shoulder from last season’s playoff performance, will make them one of the most fun teams to watch in the Eastern conference and beyond.

Watch the Chicago Bulls’ first of many battles for a high-seeded playoff spot when they face the Miami Heat in their first regular season game on Oct. 19 at 6:30 p.m in the American Airlines Center. Broadcast information has not yet been released.