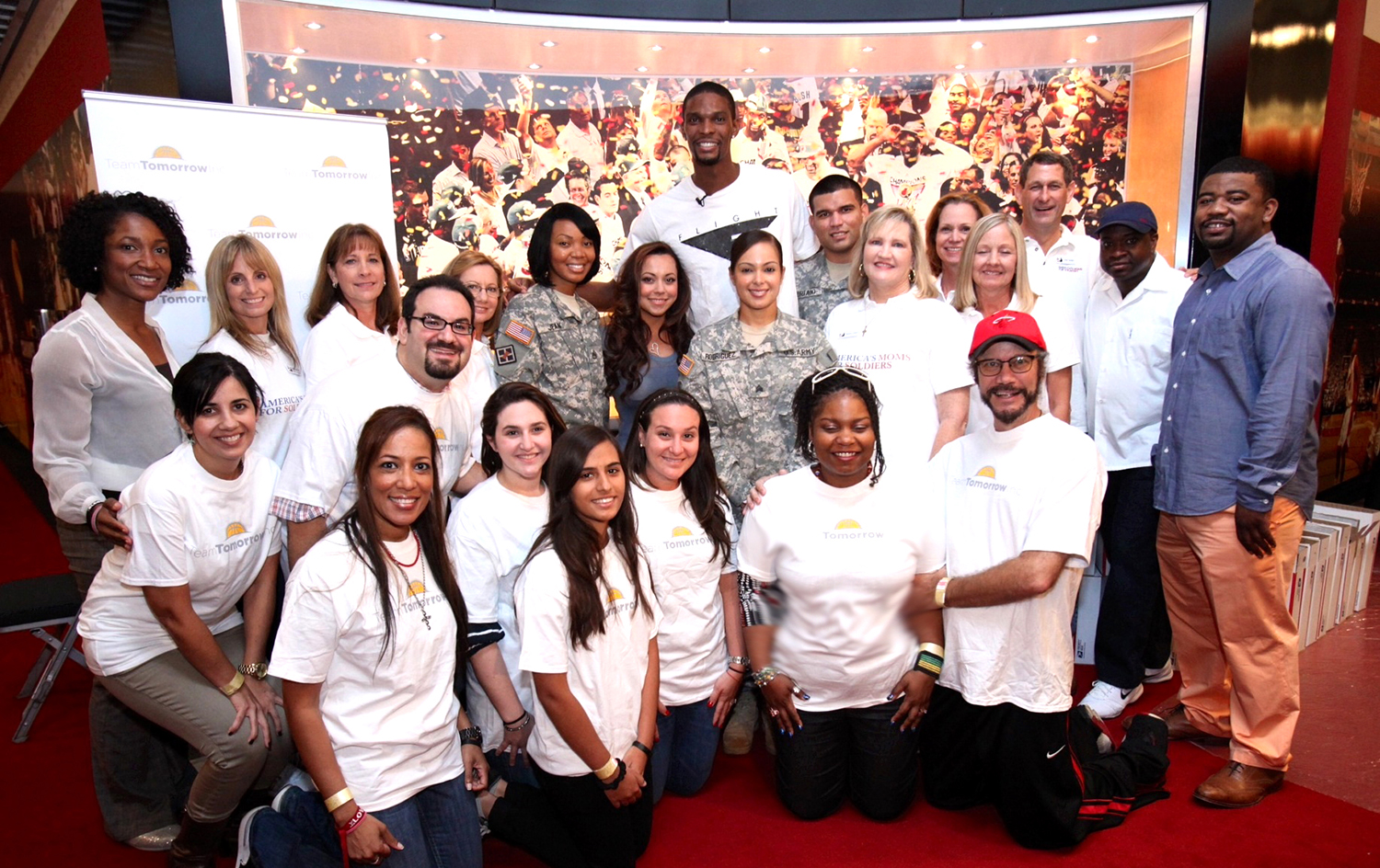 Chris Bosh and his charity Team Tomorrow Inc. brought smiles to the faces of 150 children from the Miami area during the third annual “Santa Bosh’s Workshop” at Game Time, in the Shops at Sunset Place last week. It’s difficult to describe the look of pure unconditional joy on the faces of the children from Chapman Partnership Homeless Shelter, Big Brothers of America, After School All Stars, Voices for Children, The Boys & Girls Club of Miami, Best Buddies and Make-A-Wish that night.

Bosh founded Team Tomorrow Inc. and works with his charity on a regular basis with a common goal of uplifting the lives of families in the Miami area. Team Tomorrow Inc. sponsors projects and community based events with partners, sponsors, donors, business leaders, outreach programs, celebrities, athletes and non-profit organizations.

Media was able to interview Bosh before the children were brought upstairs for their big surprise. Instead of asking Chris Bosh questions I wanted, I got the opportunity to ask the children what questions they wanted me to ask for them!

Juan (13) asked, “What was Christmas like for you as a kid?” Bosh said, Christmas as a kid was nothing like it is now. “I spent Christmas at my aunt’s house and opened gifts, lots of unused sweaters!”

Jessica (14) asked, “Your Twitter profile says Coolest Dude Alive. What’s up with that?” Bosh tittered, thought about it for a second and replied with “That’s what I think, I keep it simple!”

Luke (10) asked, “Favorite football team?” Bosh is from Dallas and his understandable response was “The Dallas Cowboys”.

Perhaps the best question asked was from Sam (14), “If you were playing NBA 2K13 franchise mode as the Miami Heat and you were slumping in the game, would you trade yourself?” Bosh and other media members laughed out loud, and Bosh responded with an exclamatory “Absolutely not!”

The one question I personally wanted to ask Chris Bosh was if he planned on getting together with Team Tomorrow Inc. to do something for the victims of Sandy Hook Elementary School. Bosh said that he doesn’t know if tragedies like this that took place are preventable or not but felt it was important for people, not only athletes and celebrities, to get out and support those affected in the horrible tragedies at Sandy Hook. He also said that he does plan on doing something with Team Tomorrow Inc. to support the families and victims.

On a much lighter note, Bosh, wife Adrienne, and daughter Trinity walked around the pop up shop as one happy family on the top level of Game Time, while hundreds of unexpecting children hyped up on soda and candy ran around using their charge cards to play hundreds of arcade games downstairs.

As “Run, Run Rudolph” blasted on the Game Time speakers, the kids lined up quietly in a single file line (yeah, right) as they waited patiently for a special surprise waiting for them upstairs. Little did they know, Chris Bosh was waiting for them in an extremely well decorated room upstairs with hundreds of balloons, Christmas decorations, and donated gifts! The children stuffed bags from Burger King, who co-hosted the event, with gifts donated generously from Nike, Lacoste, Levi, Hasbro, McMillian Books, Skylanders Giants, Divine Delicacies, Miami Heat, See Ya Sunglasses and The Frieze Ice Cream.

The event was extremely successful on so many levels. Children filled their bags with clothes, board games, candy, and much, much more as their role model Chris Bosh walked them around the room. He took the time to meet the children individually, take photos, and even give autographs. Despite all the hardships these children have faced in their short life, a philanthropic event put together like this gave them a Christmas to remember that will stay with these children for the rest of their lives.