Through eleven games, the Cleveland Cavaliers are 8-3. Although they are now on the back of a two game losing streak, with one more game to go in their four game California road trip, they have looked better than most could have really hoped for. The sky’s the limit for this team if they maintain this style of play.

Things to Be Proud Of 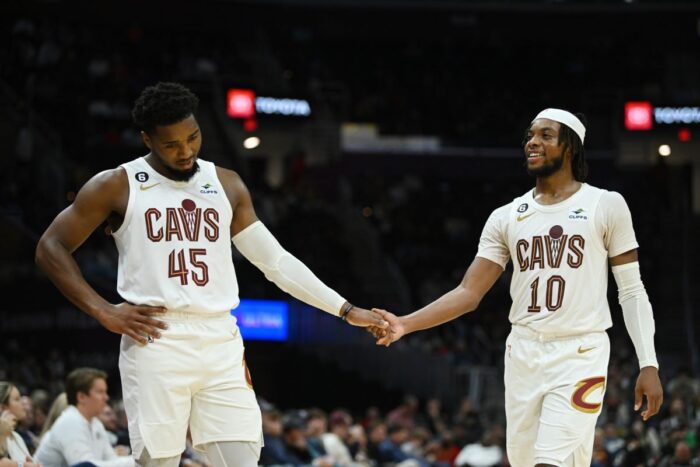 While these articles may start sounding like a broken record, the best thing about this Cavaliers team really has been the insane play of Donovan Mitchell. He has just one game under 20 points, and just two under 30 which is insane, and he’s averaging 31.9 points, which is third in the league.

While Garland was out, Mitchell was also facilitating at a high level. The most surprising of it all has been his two-way presence. Considering his former reputation as a traffic cone in Utah, his solid defense has been a massive improvement.

Mitchell is also shooting an insane 45% from deep, scoring basically at will, and in a lot of different ways, such as dribble penetration, mid-range pull-ups, and threes off the bounce.

In the last couple of games, there has been a bit of a lull in how he integrates with the team. He isn’t getting teammates involved much and vice versa. That’s been a big factor in their last two losses, with Mitchell handling the ball a lot less than you’d like in crunch time and sometimes getting frozen out, or relegated to taking contested threes.

Besides Donovan Mitchell, fellow teammates that are exceeding expectations have been the bench trio of Kevin Love, Cedi Osman and Dean Wade. All three have signature games, with Love dropping 29 on 8/13 from deep and Dean Wade scoring 22 on 6/8 from three-point land against the New York Knicks. Meanwhile Osman has showed out, scoring double digit points in four straight games.

Each of them can get hot very quickly and provide solid sparks off the bench. More specifically, Kevin Love, who should easily be in Sixth Man of the Year conversation.

Things to Work On 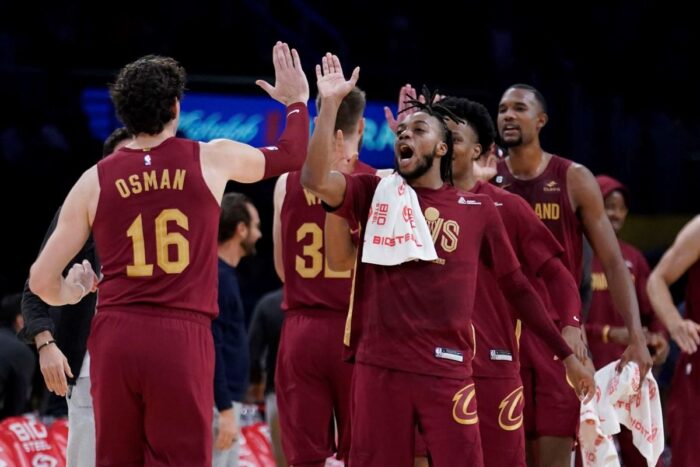 Despite one of the best records in basketball, there are some things that still need work. Darius Garland has been up and down since returning from his eye injury. His first game back was his best of the season so far, but since then has struggled with his shot and turning the ball over. There’s far too many out-of-control attempts to the basket that end with a desperate pass. With Mitchell’s recent success at facilitating during Garland’s absence, It might be a good idea to let Mitchell lead the team when Garland isn’t playing well.

In somewhat related fashion, during this road trip, teamplay has taken a downturn. Ball movement has stagnated, and many possessions devolve into one of the three ball handlers in Mitchell, Caris LeVert and Garland taking turns, trying to make something happen. Having three guys capable of creating their own shot can lead to this type of play. It’s up to the players and coach to recognize these habits and iron them out.

Although they’ve been great defensively at the start of the season, they’ve given up 119 and 127 points in their last two games. Both teams had very hot shooting nights (both opponents shot over 50% from the floor and 40% from three) but the interior defense didn’t get the job done compared to games past. Additionally, Cleveland surrendered an abundance of open threes.

Coach J.B. Bickerstaff said after the game against the Sacramento Kings that they’ve “gotten into this habit of allowing people to play freely to start games and think we’re going to turn it on in the second half. That’s arrogant basketball.”

Laziness and complacency are common themes for a young team. However, having awareness of it so quickly is half the battle. A championship mentality is as important as having championship talent.

Finally, there’s still a looming question about the starting small forward. LeVert has taken the job for now, but his playmaking skillset appears excessive next to both Mitchell and Garland. It also doesn’t help that LeVert’s scoring is inconsistent. At times, he contributes with high shooting percentages, yet it’s immediately followed by absolutely awful ones.

Dean Wade is a candidate for replacement. He’s been on fire to start the season. Finally, the Isaac Okoro experiment might finally be running it’s course. He’s averaging a career low two points per game on a career low 14.4 minutes. While he hasn’t had much opportunity, he also hasn’t shown the crucial improvements he needed to make offensively. The three position was the weak spot coming in this offseason, and Cleveland hasn’t had an answer.

How Are We Feeling?

Despite the two game loss streak, life is good for the Cleveland Cavaliers. First off, a four-game Cali road trip isn’t easy, especially coming from Ohio. The Los Angeles Clippers and Paul George are tough to beat. The Sacramento Kings aren’t terrible from years past, with a roster full of young guys that can fill it up on offense. More importantly, both of these games were close until the final whistle.

The Cavs have yet to be blown out, which is more than many teams can say. Overall, the play of Donovan Mitchell has been superb. The bench looks decent, and the frontcourt in Jarrett Allen and Evan Mobley continue to perform well. Once Garland is back in form, this team will be even more dangerous. The team is already looking like one of the best in the Eastern Conference. If they can nail down that SF spot, hardly any weaknesses will show when firing on all cylinders.

Should Eric Gordon be Starting?
Three Takeaways From the Nuggets Win Over the Pacers