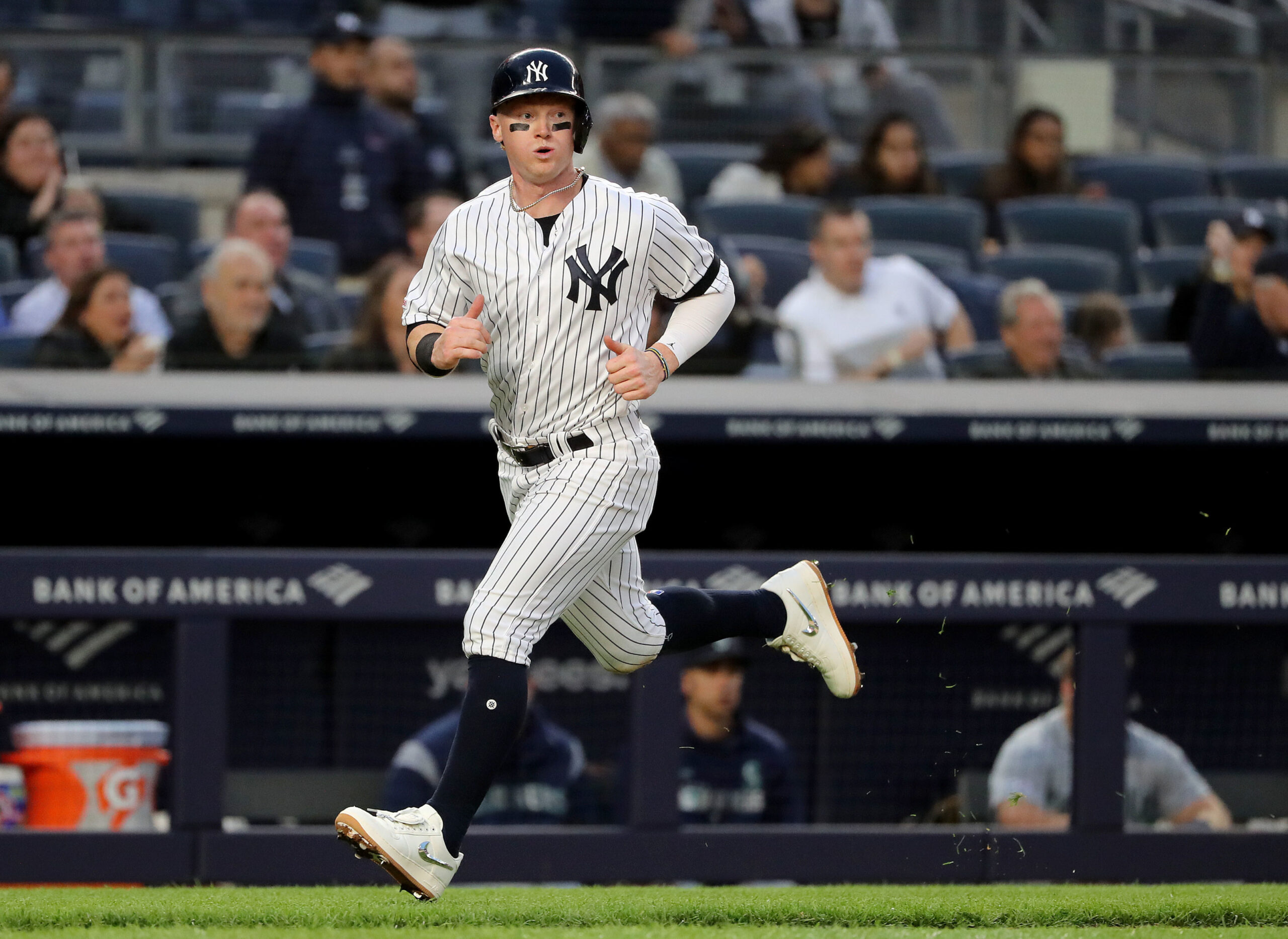 “Legendary bat speed.” “New York Yankees starting left fielder of the future.” These are phrases New York Yankee fans have been accustomed to ever since Frazier came over in the 2016 trade with the Indians. Although Frazier strikes out at an above-average clip, there were few concerns about his ability to hit for power. Frazier has been blocked from the left field for two reasons: Poor defensive metrics and Brett Gardner.

Until 2020, Frazier was a disaster in the Yankees outfield. Frazier racked up -10 DRS and -9.6 UZR from 2017-2019, making him one of the worst outfielders in all of baseball. Frazier made poor routes on fly balls, and many of the throws were offline. Despite going on a tear during the first half of 2019, Frazier was sent down to work on his outfielding.

Seeing Frazier struggle in the outfield has been heart-wrenching for so many Yankee fans. In the 2016 deal with the Indians, the Yankees traded away their beloved closer turned set-up man, Andrew Miller. The ex Yankee closer was dominant from 2014-2016 in the Bronx, but with the Yankees out of a playoff run, they had to prepare for the future. Acquiring Frazier moved the Yankees in a new direction; building their team around a new core of young players for deeper postseason runs. Unfortunately, Frazier has not been part of the picture as much as Yankee fans were hoping for.

Frazier’s defense, directly and indirectly, affected his playing time with the Yankees. Although his defensive woes in 2019 were the main reason why Frazier was sent down, that was not the case in years prior. Frazier was sent down in 2017 and 2018 because he struck out way too much, or was blocked by Gardner in left field. However, during 2017-18, Frazier was vulnerable. When he was not producing offensively (at least more than Brett Gardner) and could not handle the corner outfield position defensively, he offered little value at the Major League level.

Before 2020, Frazier hardly received sufficient playing time with the Yankees. Frazier pointed this out on several occasions with cryptic Instagram posts and mentioning how he just wants to return to New York and help out the Major League club. At times, Frazier appeared to be a headcase, and someone that could not handle playing in the Big Apple, yet everything changed in 2020.

Beneath the bright lights of New York, Frazier continued to work hard on his fielding and something clicked when he rejoined the Yankees this past season. Frazier hardly took any poor routes in 2020 and Yankee fans were able to see his above-average speed be utilized in the outfield. Frazier’s throws were a lot more accurate and even looked like a defensive upgrade over Gardner’s glass arm. Overall, Frazier had an above-average 2 DRS and 1.7 UZR. He may not win a Gold Glove award, but at the very least Frazier can now be trusted as a defensive outfielder.

Even though Frazier showed that he can be a two-way player in 2020, the starting job in left field may not be given to him. Gardner has started over Frazier since he first came up in 2017. During Frazier’s first year in the bigs, Gardner was a 20-20 player. The following year Gardner had a down year. Rumors started to swirl around that perhaps Gardner was too old, and the Yankees should make way for the man formerly known as “Red Thunder”. Still, Gardner held on to the job.

Furthermore, Gardner exceeded expectations two seasons ago. Many Yankee fans believed in 2019 that father time caught up with Gardner and Frazier would start over him in left field. Instead, Gardner had arguably his best offensive season last year and left Frazier in the dust. Lastly, in 2020, Frazier was heads and shoulders over Gardner during the regular season, but Gardner still received more playing time in left field. At least in the postseason, Gardner had a more legitimate claim to start over Frazier, as the longest-tenured Yankee had an unfathomable 211 OPS+. Despite Gardner’s postseason performance and respectable 2020 campaign, the Yankees have reached a turning point; this offseason the Yankees need to decide whether or not to trade Frazier.

The Yankees have refused to trade away the once mega-prospect for several reasons. First, the Yankees kept believing that Gardner would hang his cleats, paving the way for Clint Frazier. Instead, Gardner has proved why he should continue to remain in pinstripes with his production in the last few years. Secondly, because Yankee outfielders such as Aaron Judge, Aaron Hicks, and Giancarlo Stanton have all been injured in the last few seasons, they needed outfield depth. Thus, Frazier has essentially been in a state of purgatory, not receiving the starting outfield gig, not being traded, and bouncing between Triple-A and the Majors.

Nevertheless, 2021 will be different. Frazier can handle himself offensively and defensively. Furthermore, Gardner has declined on both sides of the field and is 37 years old. Therefore, the Yankees need to let Frazier be the starting left fielder for the entire season and move Gardner into a backup role, or finally trade Red Thunder away.

The Yankees can have their cake and eat it too. Throughout a full season, Frazier can hit 20-30 homers with an OPS north of .800 while playing at least passable defense. On the other hand, Gardner may hit 10-15 homers with an OPS between .700 and .750 and play slightly above-average defense. Having Gardner as the primary left fielder would not be a bad option, but the Yankees should evaluate what Frazier can do over a full season. The Bronx Bombers can still re-sign Gardner (which is already very likely), but they are close to ending his tenure in Pinstripes. 2021 could be Gardner’s last season as a Yankee, and by placing him in a backup role, the Yankees would firmly establish their intentions.

Besides, Gardner will be just fine in the backup role. He found himself in that position during 2019 and understood his role on the team. Gardner also made the most of his chances as the Yankees backup-turned starter and had an excellent 2019 campaign. Sure, he is unlikely to repeat his 2019 performance next year, but Gardner can still produce with his bat, glove, and legs in limited action.

Yet, the Yankees should truly consider putting Frazier on the trading block. Because of the gold glove nomination, Frazier’s trade value has never been higher and it may never be higher. As of now, Frazier looks like a bonafide, up-and-coming outfielder. However, there is a real possibility that he will continue to strike out a ton, sapping his offensive production. Frazier also may regress defensively in 2021, as his defensive performance this season was a stark contrast from every other year as a Major Leaguer. As a result, if the Yankees decide to trade Frazier, they need to ship him away this offseason.

Incidentally, the Yankees may want to receive players via trade, rather than go after big free agents. According to Spotrac, the Yankees have less than $1 million to work with before exceeding the 2021 Luxury Tax threshold. Although Yankees owner Hal Steinbrenner said that he would like his team to stay under the $210 million threshold, that is unlikely to happen. Certainly, the Yankees are expected to re-sign DJ LeMahieu for at least $20 million a year. Nevertheless, LeMahieu, Gardner, and cheap relievers may be the few free agents the Yankees would go after.

Since Frazier’s value is at a high point, the Yankees could capitalize on his stock and deal him for some much-needed players. In short, the Yankees need pitching. Gerrit Cole, Deivi Garcia, Jordan Montgomery, Domingo German, and Luis Severino (later in the season) are a respectable quintet but are not a championship-caliber rotation. As shown in the postseason, Chad Green, Zack Britton, and Aroldis Chapman are the only relievers that Manager Aaron Boone trusts. As a result, letting go of Frazier could allow the Yankees to receive an affordable starter, or young, hard-throwing relievers.

Consequently, the Bronx Bombers would recover quickly if they sent Frazier away from New York. As mentioned, Gardner is more than capable of handling left field. Furthermore, Miguel Andujar and Mike Tauchman would have the chance to prove themselves and could eventually take over the starting position. Even if Gardner does not re-sign with the only franchise he has known, the Yankees can let Andujar and Tauchman develop and battle each other for playing time. Allowing these two young outfielders to receive more playing time would help the Yankees evaluate their role with the Major League Club and determine whether these two are players could stick around in the near future.

Worst comes to worst, Giancarlo Stanton could spend more time in the outfield if Andujar, Tauchman, and potentially Gardner struggle. Stanton has always been an impressive fielder and spending more time in the field would free up the DH spot in the lineup. The Yankees have plenty of players who could spend time as a DH such as Luke Voit, Mike Ford, Gary Sanchez, and possibly Aaron Judge or Aaron Hicks from time to time. Although Stanton may again find himself on the I.L., having below average to average production at one position will not ruin the Yankees.

Above all, the Yankees cannot continue to have an undefined role for Frazier. In other words, the Yankees cannot place Frazier in a backup role again as his production could falter. Therefore, the Yankees need to decide Frazier’s future with the team. Whether Frazier becomes their starting left fielder or trade him away, he is too valuable of a player to be sitting on the bench.

OPS: On Base Percentage + Slugging percentage. A hitting statistic. to evaluate a player’s patience, and power. MLB 2020 average: .740 OPS.