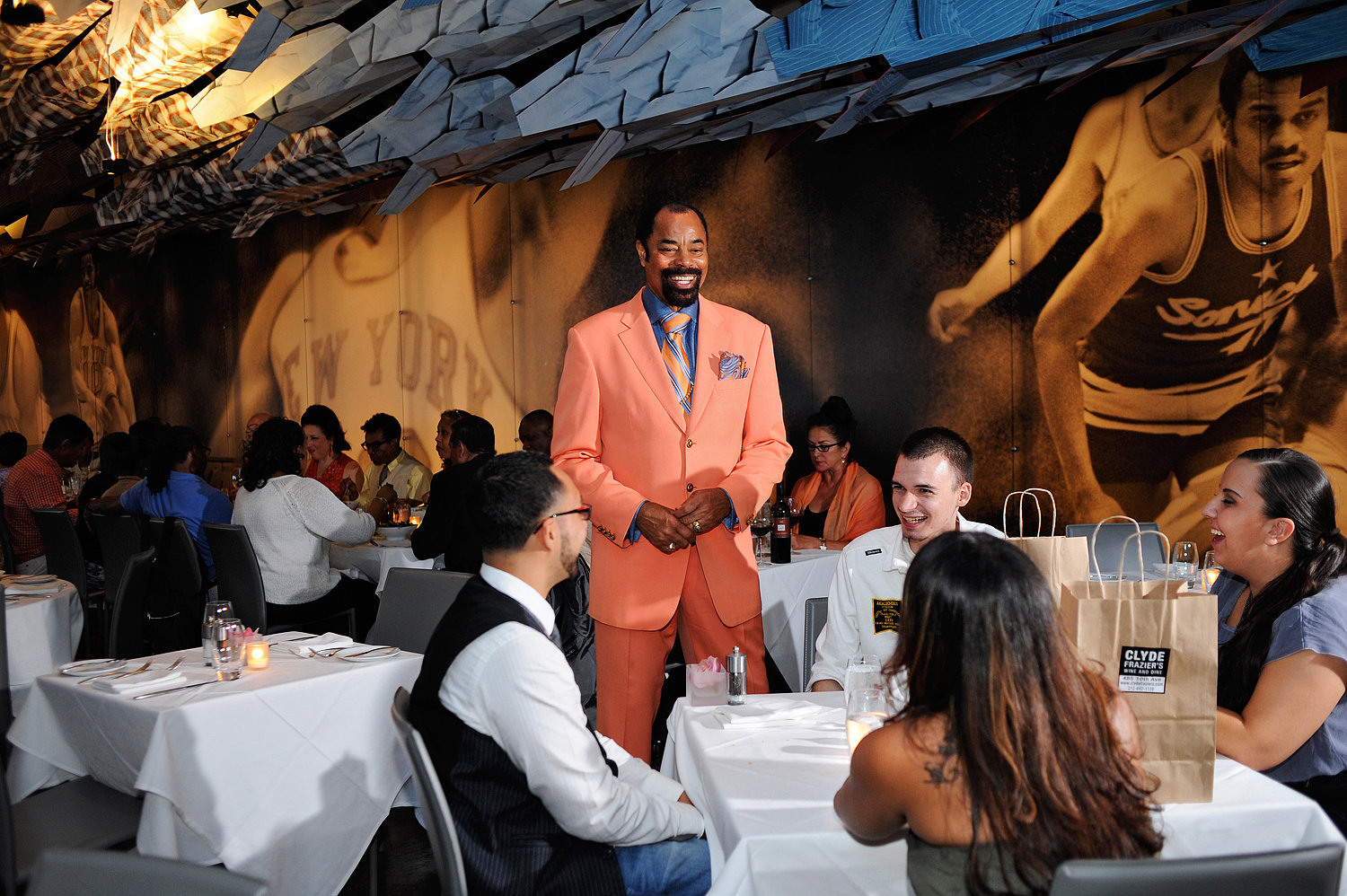 Hall of Fame NBA star Walt “Clyde” Frazier headed the New York Knicks for 10 years between 1967 and 1977. When he retired, Frazier held Knicks records for points scored, games played, and assists. But it was Frazier’s style and charisma that redefined the character of basketball, significantly enhancing its popularity from New York City across the country.

Today, Frazier spends his time working on multiple projects and odd jobs, which include broadcasting for the MSG Network telecast of Knicks games, overseeing the Walt Frazier Youth Foundation, and operating his own restaurant, just blocks away from Madison Square Garden called Clyde Frazier’s Wine and Dine.

“The proximity to the Garden, we tried to capitalize on that, and it’s also 2,000 square feet,” said Frazier. “The ambiance is Clyde, but what we really focused on was the food. Most sports bars don’t have good food. People can come and get a good steak, chicken, seafood, as well as burgers and fries. All the different beers that we have at the bar, and you watch three different games at one time on all of the TV’s. It’s like an upscale type of sports bar.”

The restaurant, which opened in March of 2012, consists of a main dining room, bar area, three dozen flat-screen TVs, and – perhaps the most noteworthy – a half-basketball court, perhaps to play “Horse” between appetizer and entree. On the menu, a red asterisk denotes “Clyde’s favorites.”

In addition to overseeing his own restaurant, Frazier continues to give back to the youth community through his own Walt Frazier Youth Foundation, an organization that helps inner-city high school students gain the hope needed to achieve their full potential.

“My foundation ironically is not about sports. I consistently do it on my own, and I don’t have investors,” said Frazier. “If I see kids who are thriving or prospering, I’ll call the school and try to come in to encourage them to keep doing what they’re doing, and also I have other friends of mine that go to the schools and bring in players. It’s just my way of giving back, I feel compelled to give back. I owe a lot to the people who gave me direction and confidence, so I’m just trying to reciprocate that and give back to the kids.”

Frazier attributes his foundation and charitability to the people who helped him strive for a higher education. He recalled a difficult childhood transition, leaving Georgia to attend Southern Illinois to play college basketball with the Salukis.

“A friend of mine encouraged me to go there and visit. I went up to the school, and I was petrified,” said Frazier. “They had 25,000 students, it was an integrated school, maybe 5,000 blacks. I was very terrified to go there, but my parents were the catalysts for me to go. They wanted me to get a better education.”

After college, the New York Knicks drafted Frazier 5th overall in the 1967 NBA Draft. Frazier played 10 years with the Knicks, where he was a 2-time NBA Champion and 7-time All-Star. After retirement, he held the majority of New York Knicks offensive records, until Patrick Ewing eventually broke most of them. Frazier’s assists record still stands.

“I never thought the Knicks would’ve draft me,” said Frazier. “I was totally shocked, but from the beginning, I loved New York. The people there are crazy about basketball.”

Since 1997, Frazier has been an active color commentator for the New York Knicks alongside Mike Breen for the MSG Network. His commentating is anything but ordinary, as his on-air outfits consist of bold plaids and checks, colors of yellow, red, salmon, and orange.

“I like unusual combinations,” Frazier said. “I have to entertain myself. I like combinations that people wouldn’t think would go normally together.”

Walt Frazier can attribute his success in the sports industry to all of the people who had the opportunity to notice how hard he played the game, as well as his generosity off the court. His charismatic style is beloved by people not only in New York, but across the country as well.

“I get so much respect when I walk the street,” said Frazier “The other day, I was in Washington. I hopped in a taxi, and the driver was a black guy from back in the day, he said, ‘Oh Clyde, you can’t pay for this ride, it’s my pleasure!’ I get that everywhere I go – Atlanta, Chicago, Detroit – anywhere from the past, people have so much respect.”

Bowling with Boley for Special Needs Children
An Angel Amongst Devils