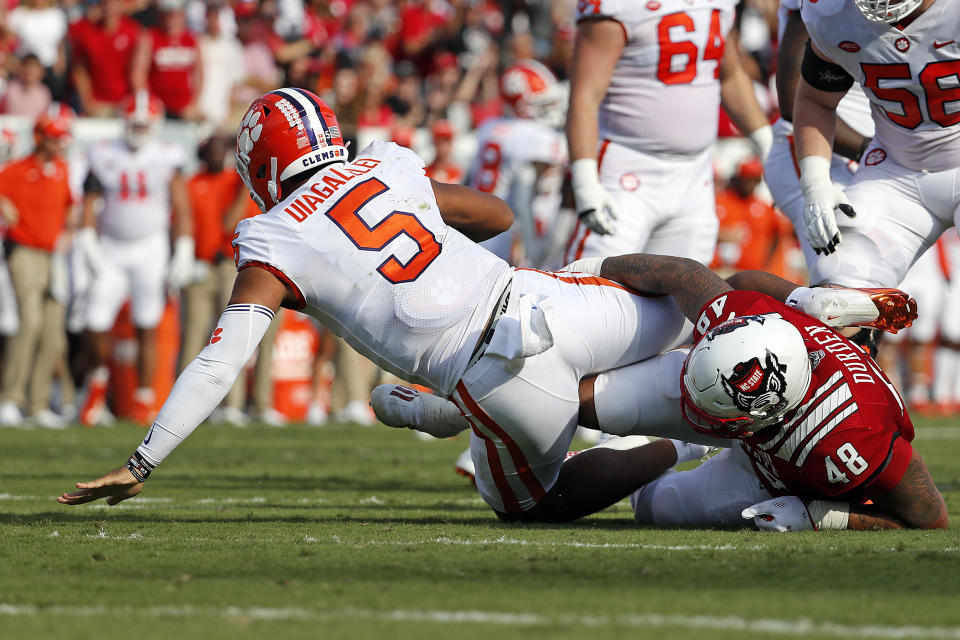 With another week in the books, Monday is here and it’s time for the BSP Power Rankings. The top seven remain unchanged, but a whole lot of movement outside of that so let’s get into it.

Alabama moves to 4-0 after the SECOND most dominant performance in all of football Saturday. Next week they’re hosting Ole Miss and the Lane Train in Tuscaloosa in a classic SEC West matchup. We’ll have a full preview of that game posted later this week, but my message for Alabama fans is to be optimistic this season but take no game for granted. The gap isn’t so wide this year as years past, and that number one ranking is a target on your back.

Keen readers noticed “second” in all caps in the above paragraph and knew what was coming. What the Bulldogs did to the Commodores last week should not have been allowed on television, these Vanderbilt players have family and friends watching from home. The right thing to do would have been broadcasting the movie “300”, as we could have seen something significantly less violent than the 62-0 blowout we ended up watching. Georgia is hosting Arkansas next week, in what would be the premier SEC matchup if not for Ole Miss @ Alabama. Expect a full preview for the Dawgs and the Hogs as well, as both teams look to march undefeated through conference play.

Next Week: At Maryland

Some fans may have hoped for a wider margin over the Rams last week, but this Iowa team has, you guessed it: Taken. Care. Of. Business. The Hawkeyes remain undefeated as they travel to take on the also-undefeated Terrapins this Saturday. Maryland made their first appearance of the BSP rankings this week, I won’t spoil it and tell you where, but I can assure you I’m not picking them over the No. 3 Hawkeyes.

Next Week: At Stanford

Oregon seems to have fallen out of the national spotlight after upsetting the Buckeyes in Columbus, but don’t take your eyes off this team. A national brand, a talented roster, a proven coaching staff, this team has all the ingredients for a serious run this year. The Ducks travel to take on the Cardinals this week, a team high off a win over USC with really nothing else to brag about. Stanford is on serious blowout watch along with the rest of the Pac-12 as Oregon has clearly established themselves as the No. 1 program in the conference.

Just like the rest of the top seven this week, Penn State did enough to hold onto their spot without impressing enough to move up in the rankings. They open as eleven point favorites over Indiana, a team that has struggled to live up to the preseason expectation, very much unlike Penn State. Whisperings of a Michael Penix Jr. comeback tour have swirled, but for all intents and purposes it’s hot air as the Nittany Lions look to make a lesson of another Big Ten opponent.

Next Week: At Notre Dame

The unofficial Super Bowl for the Bearcats, next week at Notre Dame by far the biggest game of the regular season for Cincinnati. After rolling Indiana, the Fighting Irish remain the only Power 5 program on Cincinnati’s schedule. An absolute hinge game no doubt, they’ll look to do what Wisconsin could not this past week, which they very well may be able to considering the talent they have in Desmond Ridder. Notre Dame has yet to line up against an elite talent at quarterback, so it’s hard to know what to expect from this game since 43 of Notre Dame’s 43 points last week, yes, that’s all of them, came off of turnovers.

Next Week: At Kentucky

The Volunteers threw everything they had against Florida, and for the first half seemed to keep pace, however, a second half shutout and nearly 150 yards rushing for starting quarterback Emory Jones put this game away. Anthony Richardson seems to be healthy going into Lexington, the same place Kyle Trask was coronated as the Gators starter. However, regardless of how fun, confusing, exciting, and frustrating this quarterback situation has been, the rest of this team is seriously talented. Expect a win and expect to cover if the line hangs out where it is now. (-8)

Next Week: At Alabama

Ole Miss fans have been waiting for this game since they put the fear of God in the Tide last year in Oxford. Both teams firmly believe they’ll come away with a win, as Rebel confidence is at an all-time high behind Heisman hopeful Matt Corral and the Tide look to extend a five game win streak against Ole Miss. The game is set in Tuscaloosa in a year where the crowd’s influence over a game has had more impact than ever before. This game has the potential to end about a half a million different ways, it’s everything right with college football, and writing the preview for this one will be a doozie, but its why we love the sport.

Notre Dame moves up in the rankings this week, but not due to a 28 point victory margin, rather, they move up due to a mostly competitive game against a Wisconsin team with serious struggles on offense as well as several teams ranked above ND moving down in the rankings. I don’t mean to crap on this team, after all, they are undefeated, but I’m also picking them to lose at home against a Group of 5 program this Saturday, so do whatever you like with that info.

Next Week: At Georgia

Lot of happy folks in Fayetteville last week as Arkansas swept the state of Texas in a stretch of games with obvious recruiting implications. KJ Jefferson was in and out of the game as he nursed an injury in the second half, and he’ll be a crucial element if the Hogs want to pull the upset in Athens this week. Expect the Hogs/Dawgs preview in the coming days, as this will be a big time SEC matchup with serious top 10 implications.

Next Week: At Rutgers

Next Week: At Kansas State

Next Week: At Wisconsin

Next Week: At Utah State

Next Week: At Hawai’i

Next Week: At Oklahoma State