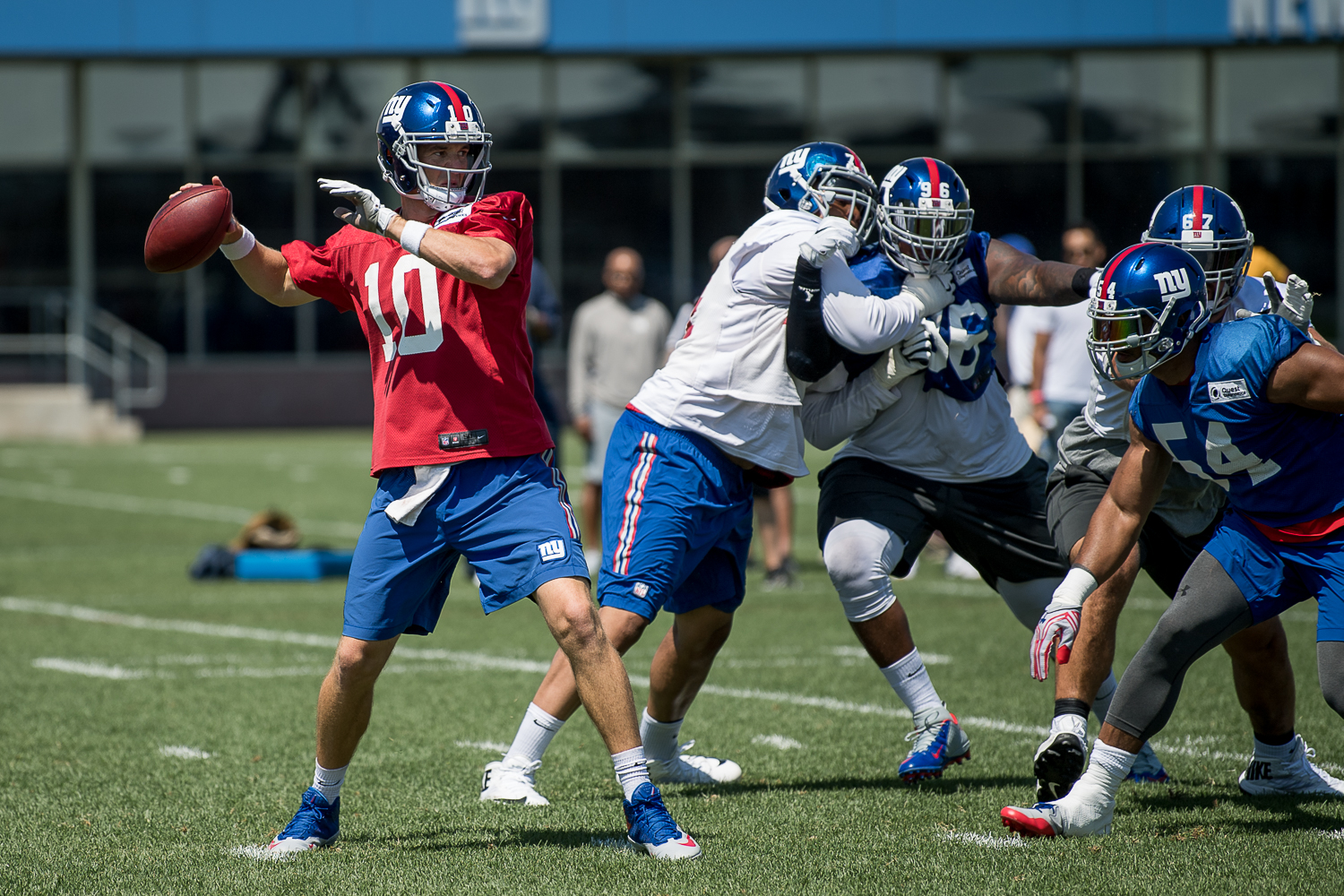 After a week layoff the Giants were back at it again on the practice field hoping to turn the tide on the brutal 1-6 start the team went through during the first part of the season. The goal to show they are better then this extra noise around the franchise.

This week Big Blue has a 1pm kick off time against the Los Angeles Rams at Metlife stadium in East Rutherford, NJ. Giants looking to bounce back from a disappointing24-7 loss against the Seahawks before their Bye week.

The Giants and Rams have played each other 41 times and the Rams hold a 25-16 record over New York. Their last meeting saw the Giants win a close 17-10 contest in London on October 23,2016. The Giants currently hold a seven game win streak against the Rams.

Eli Manning is a perfect 5-0 against the Rams in his career throwing for a total 107-163 for 1366 yards, 12 touchdowns and one interception.

Eli was open and honest abut the Rams during his media session on what to expect from his opponent this week. “They’re a talented team. They got a good front seven, got a lot of speed. Their corners play well. They do a good job of getting to the quarterback, good job stopping the run. So, we got to be sound up front, know our assignments. They got some good players and we have to win on time in our receivers. But, play a good bit of man and it still give you some opportunities to make some plays.”

While the Giants try to right the ship, Rams Head Coach Sean McVay wants his team not to get caught on what might become a trap game. “Well, I think the one thing that you appreciate about this league is that every single team on any given week can win and if you’re not ready to go, you get exposed and you get humbled very quickly. While you do look at what a great player Janoris Jenkins is, they’ve got a lot of good players stepping up. You look at [Dominique] Rodgers-Cromartie, [Ross] Cockrell’s done some good things, I think Eli Apple’s a very good football player and there’s a lot of depth on that defensive backfield. You look at some of the receivers. I’ve been very impressed with [tight end] Evan Engram, him stepping up, [wide receiver] Sterling Shepard coming back to health. So, you can see why this is an 11-5 football team last year. This league is so competitive that every single week, if you don’t bring it, like we said, you get exposed, especially against a very good team like this.”

Ben McAdoo is looking forward to the opportunity to compete against a red hot Rams team which has had a lot of success so far this year. “Great opportunity to face the red-hot Rams. They’re 4-0 away from LA this season and they’re 5-2 coming off a bye. They have the NFC’s top-scoring offense, eight different starters from the unit we saw last year in London. They’re balanced – 30-plus rushes per ball game. (Todd) Gurley is a complete back. He has size. He has speed. He has power and vision. (Jared) Goff is gaining confidence heading into his 15th NFL start. He has a variety of playmakers he can distribute the ball to in (Tavon) Austin, (Sammy) Watkins, (Robert) Woods and (Cooper) Kupp. They have two young, athletic tight ends – (Tyler) Higbee and (Gerald) Everett and a rebuilt offensive line with three new starters.”

Game Time is 1pm from Metlife.

-THE HYPE THAT WAS!!

A lot of focus went into buying into the “Hype” placed on to the team during the preseason that the Giants were Super Bowl contenders. Now they fight for credibility.

The high expectations were not just believed by the players, but by upper management as well. After an 11 win season and a first round playoff exit, the team felt it was pieces away for competing for a birth to the Super Bowl. Then the bottom fell out.

Offensive Lineman Justin Pugh takes his share of responsibility for believing the press clippings as he remembered exactly what he said to the media back in July. “I can only speak for me personally and you can look back at what I said. I said, I thought this was the best team that we’ve had on paper, but that doesn’t win games for you and obviously that didn’t win games for us. So I can probably say that I am guilty of that because I’ve said it publicly.”

From the Defensive standpoint LB Jonathan Casillias has the same perspective that Pugh dispalyed. JC feels that the team now must step up to gain respectability, not a playoff spot. “I don’t know. Year in and year out, it’s not the first time I’ve seen or I’ve been around it where you’ve got a team that performed really well, the playoff caliber team, a team that doesn’t start the way they want to the next year. You know, lose the first couple games. Go 0-2, 0-3, 0-4. Whatever it is. We have to be able to figure out a way how to turn it around and I think it rides a lot on the defense. That’s not to take anything away from the offense, Eli (Manning) and everything they’re doing. But, historically, over the years, growing up in the back yard of the Giants. Historically, the defense has won games for New York and I feel like moving forward, it has to be on our backs. We have Snacks (Damon Harrison), we have Landon (Collins), we have a very experienced linebacking crew. We have two of the best corners and a young, promising corner. We have the makings to be a great defense that we were last year, but we have to be consistent. We have to pay attention to details and I told a couple guys today, like I’m going to go ahead and look back at some of the original calls just because it’s been a while since I actually opened up my base playbook to look at our base defense. Just to go over certain things and cross all my T’s and dot all my I’s and I’m trying to hit the ground running if and when I play this week.”

Safety Landon Collins responded to the news with disappointment. “Stuff happens. I don’t look at it as that. There’s two different things that happened with the two suspensions that happened this year. Like I said, things happen within the organization that you have to just face and coach (Ben McAdoo) just has to keep his foot down. If he’s going to keep his foot down and be stern, you have to just follow the rules.”

Less then a week away from another special night of Monday Night Bowling with @TheRealJT3 and Big Blue benefiting @IT_OT #Giants pic.twitter.com/2HVoHpNhbO

Jerry Reese: “This is MY Roster”
Back To The Bay: The Week That Was!