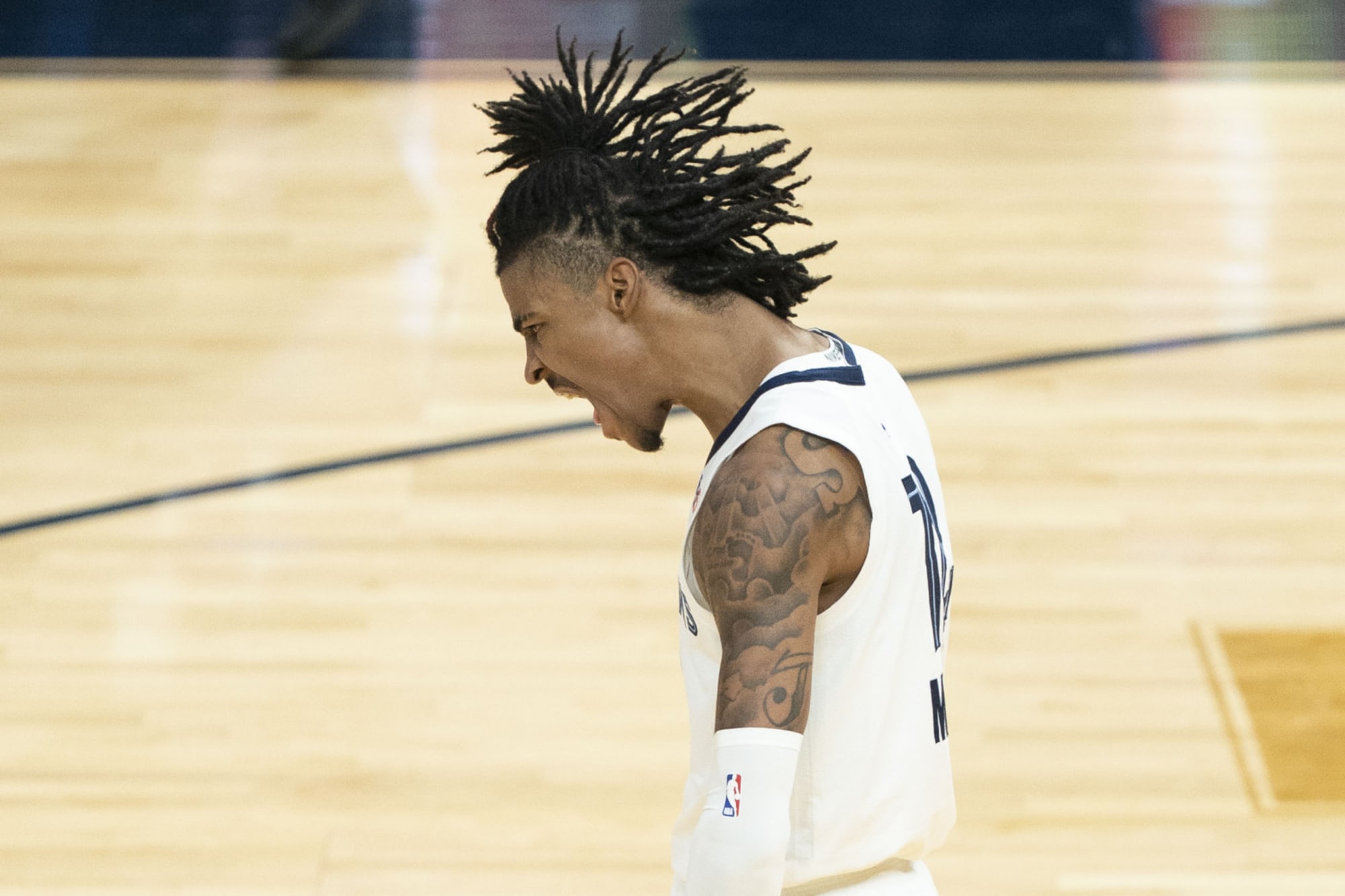 I really wanted to talk about the feasibility that Ja Morant of the Memphis Grizzlies has a real shot at earning the NBA’s Most Valuable Player award in the 2021-22 season; but I’d be remiss if I didn’t at least give a nod to Jaylen Brown and the 46 points he put up against the New York Knicks in last night’s double overtime loss for Boston. 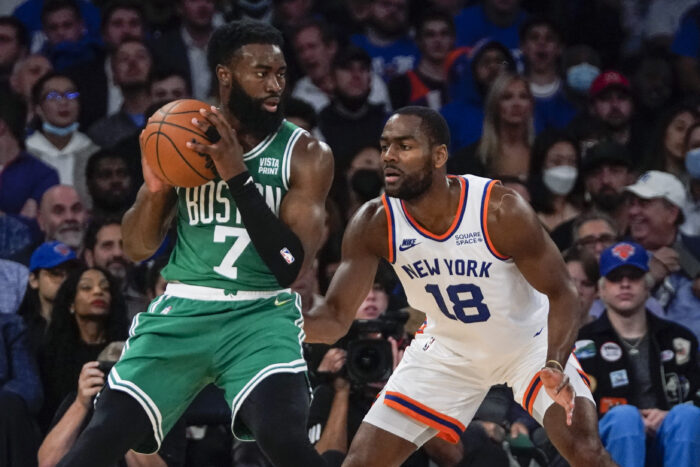 Problem is, Brown doesn’t do that nearly consistently enough to get anything other than a mention for a nice night.

(1) – they did lose, while Morant and his 37 point performance led to a Grizzlies win; and (2) the sun does shine on a dog’s posterior region every once in a while – even in a losing effort.

To win the MVP, one must climb Mount Antetokounmpo and after Tuesday night’s resounding win over heavily favored and promoted Brooklyn – where the Greek Freak tallied 32 points, 14 rebounds, and seven assists in a resounding win – Morant has a ways to go and incrementally progress over the next 81 games.

Denver’s Nikola Jokic winning it in 2021 – and then faceplanting in the playoffs – left open the door of possibility and probability that someone other than Antetokuonmpo or LeBron James could win the award.

Morant has steadily improved his game in his first two years – 17.8 points per game in his rookie year, 19.1 last season, and a lil’ ol’ 37 point effort last night. He averaged 3.9 rebounds in year one, inched to 4.0 last year, and had six last night. His assists and field goal percentage have pretty much been a wash, and I know it’s only 1.2% of the way through the season, but I like the direction he’s headed.

If not MVP, then certainly Most Improved – definitely more improved than Julius Randle, Brandon Ingram, Pascal Siakam, or Victor Oladipo.

He’ll have to fare better than James, or L.A.s true MVP – Anthony Davis – or Antetokuonmpo to warrant serious consideration.

But other than Antetokuonmpo, who’s played with more fire and determination in the last 12 months?

A 13-point third quarter was costly for the Indiana Pacers last night, as the Charlotte Hornets outscored Indiana by 20 to steal their first win of the season behind 31 points and seven assists from second year guard LaMelo Ball, and 27 points from a healthy Gordon Hayward.

Indiana was led by Domantas Sabonis’ 33 and 15 evening, Malcolm Brogdon finished with 28 points and 11 assists, and 27 points from Chris Duarte.

NEXT UP
Heat at Pacers – Saturday
Hornets at Nets – Sunday

Potentially the most dangerous team in the NBA started the 2021-22 season with a road win over the Detroit Pistons, who were without No. 1 draft pick Cade Cunningham due to a sprained ankle. The Chicago Bulls were led by Zach LaVine’s 34 point night, while overcoming a 14 point opening quarter and outscore the host Pistons 80-68 to open the season 1-0. DeMar DeRozan debuted as a Bull with 17 points, while Nikola Vucevic went for 15 and 15 in the win.

Jerami Grant was in the driver’s seat for Detroit, hitting for 24 points. Saddiq Bey and Isaiah Stewart combined for 25, with Bey netting 13 and Stewart a dozen. Cunningham is day to day. These two teams meet again on Saturday in Chicago.

The Washington Wizards may have lost Russell Westbrook, but Montrezl Harrell (22 points, nine rebounds), Kyle Kuzma (11 and 15) and Spencer Dinwiddie (13 points) more than made up for the missed points, rebounds and assists, while Bradley Beal shouldered the load with 23 points as the Wizards swept into Toronto and stole a win from the former champs. 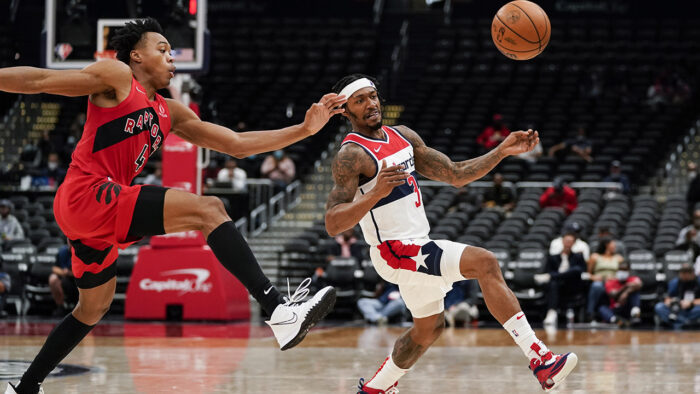 A low scoring first half for the Raptors, where the team scored 18 in the first quarter and 19 in the second, gave Washington the chance to coast in the second half to a 15 point win. Fred VanVleet and rookie Scottie Barnes led the Raps with a dozen apiece.

NEXT UP
Pacers at Wizards – Friday
Raptors at Celtics – Friday 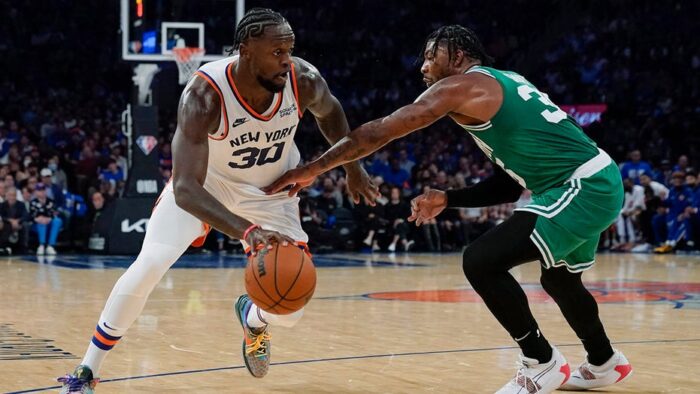 In what was obviously the game of the night, the New York Knicks vanquished their neighbors to the north in a double overtime instant classic – especially for Knicks fans, as the Garden was rockin’ last night. Jaylen Brown led the league in scoring with a 46 point performance to keep the Boston Celtics in the thick of things, but it wasn’t enough. Seven Celtics hit double digits – aside from Brown’s valiant effort, Jayson Tatum had 20, Robert Williams went for 16 and 10, #VFL Grant Williams and Marcus Smart hit for 15 points apiece, Dennis Schroder had 12, and Romeo Langford added 10.

All for naught, as the Knicks were on a mission and emerged victorious in front of the home crowd of 19,812 – all masked, all the time, I’m sure. Julius Randle led the Knicks with 35 points and nine assists on the night, while former Celtic Evan Fournier hit the go-ahead bucket in the second overtime to finish the Celtics and the night with 32 points in his Knicks debut. R.J. Barrett had 19 and Obi Toppin finished with 14.

NEXT UP
Raptors at Celtics – Friday
Knicks at Magic – Friday

The Memphis Grizzlies began their 2021-22 campaign with the same kind of grit, grind, and growl that made them sentimental favorites as a Most Improved team a season ago. The sting of coming up short has just turned into fuel for Ja Morant and Co. as they tore through the aimless Cleveland Cavaliers with a ravenous 73 point first half performance. The Grizz were led by Morant’s 37 points, while Desmond Bane added 22 on 50 percent shooting, and De’Anthony Melton popped for 20.

Cleveland was led by Jarrett Allen’s 25 point night, while Evan Mobley and Collin Sexton added 17 points apiece in the loss. Seven Cavaliers scored in double figures, but it wasn’t nearly as impressive as San Antonio’s seven or Boston’s seven doing the same feat.

NEXT UP
Hornets at Cavaliers – Friday
Grizzlies at Clippers – Saturday 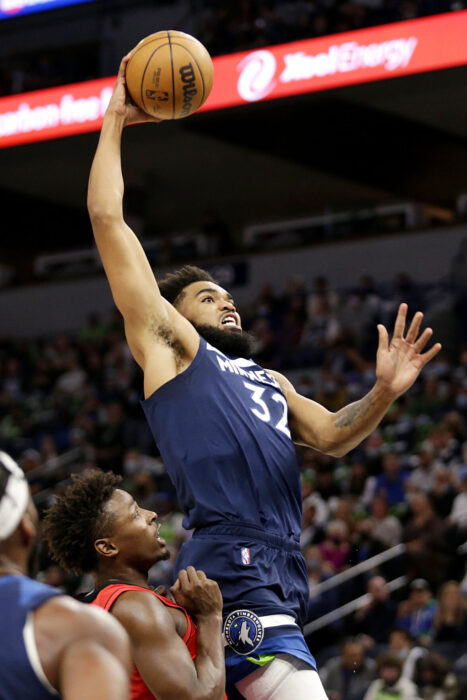 Since the departures of James Harden, Russell Westbrook, and P.J. Tucker, – along with the eventual emancipation of John Wall – these Rockets have barely sputtered off the launch pad. Last night was no different as they faced off with Karl-Anthony Towns and the Minnesota Timberwolves. Christian Wood is finally getting the chance he’s deserved, but not on the team his efforts warrant. He led the Rockets with 16 and nine. Rookie Jalen Green finished with a quiet nine, four, and four. His hair stood taller than his game.

Towns feasted on the Rockets, with a 30 and 10 evening. Anthony Edwards was right on Towns’ tail with a 29 point night, and D’Angelo Russell finished with 22, and that was about all the Timberwolves needed in a game where everybody but Patrick Beverley played, and everyone scored but Nathan Knight.

That Furkan guy, Korkmaz, was lighting it up again last night, hitting four three pointers in the final period to help the Philadelphia 76ers win Big and Easy in New Orleans, without the apathetic Ben Simmons. Both Korkmaz and Joel Embiid hit for 22 points, while #VFL Tobias Harris and Tyrese Maxey each notched 20 points on the night.

Brandon Ingram led the Pelicans with 25 points and Nickeal Alexander-Walker added 23 on a night when Zion Williamson and his 300-lb. life did not dress because of a broken right ankle.

NEXT UP
Nets at Sixers – Friday
Pelicans at Timberwolves – Saturday 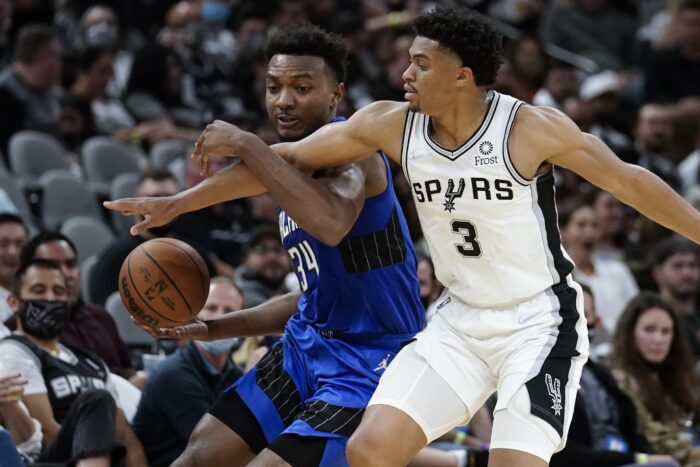 Gregg Popovich’s system works no matter who you plug and play, and the San Antonio Spurs showed as much with seven players scoring in double digits to trounce the visiting Orlando Magic by 26 points. Devin Vassell led the way with 19 points, Lonnie Walker IV added 17, and Derrick White finished with 16. Dejounte Murray and Keldon Johnson chipped in 15 points apiece, while Doug McDermott filled in with a dozen.

The Magic, seemingly on a perpetual rebuild, were led by Mo Bamba’s 18 points, Terence Ross finished with 15 off the bench, Wendell Carter added 13, Franz Wagner with 12, and it was 10 apiece for Cole Anthony and Jalen Suggs.

NEXT UP
Knicks at Magic – Friday
Spurs at Nuggets – Friday

If you thought the Oklahoma City Thunder were a young team when Chris Paul was there mentoring them, check them out now, two seasons later when you hardly recognize (or pronounce) a name on the roster besides Shai Gilgeous-Alexander. They played young last night in Salt Lake City, helping launch the Utah Jazz on another season of misguided hope, gifting the Jazz a 21 point win.

Gilgeous-Alexander led the Thunder with 18 points in the loss. Darius Bazley was the only other Oklahoma City player in double figures with 15, while former Jazz forward Derrick Favors was still doing favors for the Jazz as he only scored four points and nine rebounds for his new team.

Bojan Bogdanovic is back to full health, leading the Jazz with 22 points, while Rudy Gobert had nearly as many rebounds on the night. Jordan Clarkson came off the bench for 18 points, while Gobert and Donovan Mitchell finished the night with 16 points apiece in the win.

NEXT UP
Thunder at Rockets – Friday
Jazz at Kings – Friday

The listlessness from last year’s four game slide in the NBA Finals against the Milwaukee Bucks continued last night against the reigning MVP – Nikola Jokic – and the Denver Nuggets as the Phoenix Suns opened the 2021-22 campaign with a thud at home. 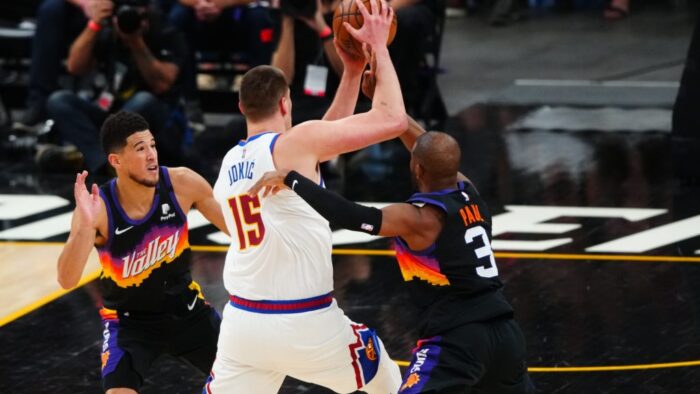 Devin Booker only shot 20 percent on the night, putting the onus squarely on the shoulders of Chris Paul and Mikal Bridges, who filed 16 apiece to lead Phoenix.

Jokic was the MVP of the Nuggets, leading the charge with 27 points and 13 rebounds in only 34 minutes, a light night for Jokic. Will Barton added 20 points and Michael Porter, Jr. had 15, while both Barton and Porter finished with six rebounds apiece and five dimes each in the 12 point win.

NEXT UP
Suns at Lakers – Friday
Spurs at Nuggets – Friday 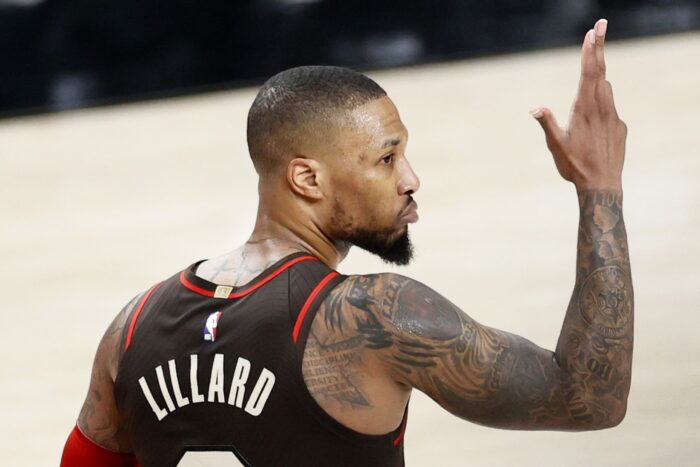 If you thought Damian Lillard wanted to start seeking pastures greener than Portland’s, this kind of start to the season isn’t going to help. The only saving grace – if you will – is that Lillard did it to himself, shooting a meager 33.3 percent on his home floor to net only 20 points in the Opening Night loss. C.J. McCollum led the way for Portland with 34, six, and five. Jusuf Nurkic tied Lillard’s 20 point output, but shot 60 percent, nearly twice better than Lillard.

Head Coach Luke Walton’s patience has started paying off, as journeymen like Harrison Barnes and Richaun Holmes combined for 57 points to throttle the Blazers for three quarters, and enough of an advantage to survive Portland’s 36-24 fourth. De’Aaron Fox added 27 and Buddy Hield came off the bench for 17 points.

NEXT UP
Jazz at Kings – Friday
Suns at Trailblazers – Saturday

Tracy Graven is the Senior NBA Analyst for BackSportsPage.com.
He has written the NBA, done NBA Radio, and appeared as a guest for the last 21+ years for HoopsWorld, Swish Magazine, HoopsHype, the Coach Scott Fields Show, NBARadioShow.com, and is also tackling the NFL, NCAA, and will be pinch-hitting on some Major League Baseball coverage for BackSportsPage.
He’s spent 21 years in locker rooms in Orlando, Boise (CBA, G League), San Antonio, Phoenix, Denver, Oklahoma City, and Atlanta.
A corporate trainer by day, he currently resides in SEC Country near Knoxville, Tennessee.
Reach him on Twitter at @RealTMoneyMedia