Cowboys vs 49ers: Divisional Round Preview 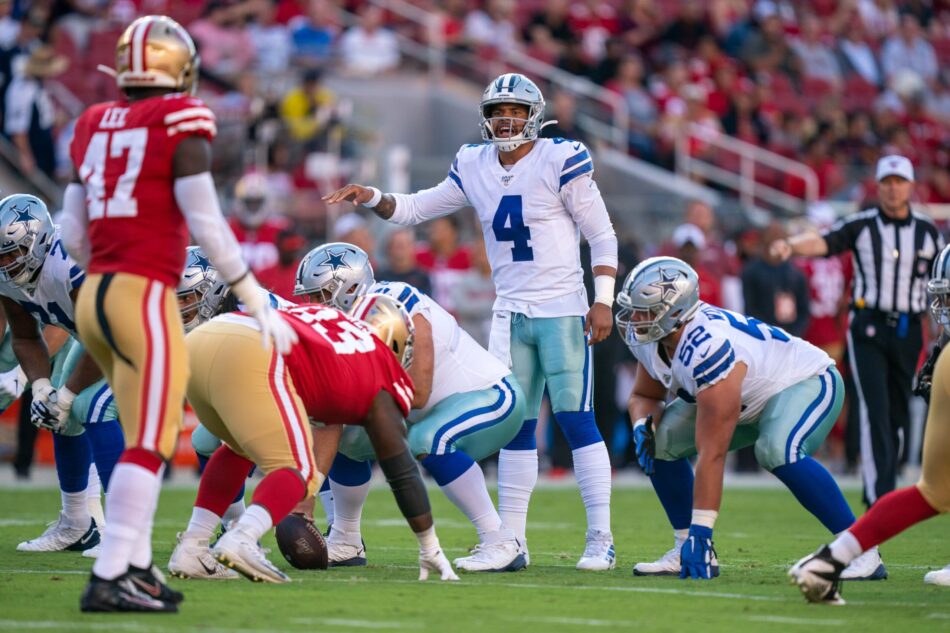 With the Wildcard Round concluded, football fans can carry on unencumbered by the likes of the Staley-saddled Chargers or the one-possession-wonder Vikings. Proven further by the NFL’s inexplicable addition of the 7th seed in 2020 (0-6 all time), the Wildcard rarely allows fraudulent teams to escape its grasp. The result is the best week on the NFL calendar: The Divisional Round.

Perhaps the most anticipated matchup of the weekend will take place in the Bay Area between two of the NFL’s historically great franchises, who together hold almost a fifth of all Lombardi Trophies.

Riding an eleven game winning streak, the San Fransisco 49ers find themselves hosting their second straight playoff game as the result of excellent general manager work from John Lynch, a ground-breaking mid-season trade for all-pro RB Christian McCaffrey, and the emergence of 7th round rookie Brock Purdy as a potential franchise QB.

Despite making and almost winning the NFC Championship last year with Jimmy Garoppolo, the 49ers spent all offseason trying to offload him before begrudgingly signing him to back up Trey Lance in 2022. Lance, the teams first-round selection from 2021, saw just two starts before an ankle injury sidelined him for the season.

In what must have been an awkward conversation, the 49ers turned back to Jimmy G. Just a few weeks later, the 49ers found themselves at 3-4, falling behind Geno Smith and the division rival Seahawks to the North. This prompted the front office to make an all-in move, sending a 2nd, 3rd, 4th, and 2024 5th rounder across the country in exchange for the dominant but oft-injured Christian McCaffrey.

From 3-4 to 13-4, the McCaffrey trade was a proven success. One that would carry them through yet another change under center.

A broken foot in a week 13 game against Miami forced the 49ers to turn to their 3rd different starting quarterback of the season, Brock Purdy. The final pick of the 2022 NFL draft took over against Miami and didn’t miss a beat. In seven games, his stat line looked far more efficient than most rookies first seasons, especially considering he hadn’t taken any starting snaps in practice.

Whether San Fransisco goes on to win the Super Bowl or loses a close game this Sunday, the McCaffrey trade and emergence of Brock Purdy will not be soon forgotten. Both were necessary to catapult the once 3-4 49ers past the Seahawks, Vikings, Cowboys, Giants, and almost land them the number one seed over the Philadelphia Eagles.

The Cowboys journey to the postseason shares a handful of similarities with San Fran, but certainly lacks the flare of a double digit win streak or a mid-season trade for another team’s franchise player. Still, they faced and successfully overcame an injury to their starting QB, placed top 10 in team rushing yards and defense, and spent the final weeks of the season in close contention for the #1 seed in the NFC.

Dak Prescott returned in week seven after receiving an injury to his right thumb in garbage time of their week one loss to the Tampa Bay Buccaneers. Despite missing five games, Prescott managed to tie Davis Mills for the most interceptions in the league with fifteen.

The Cowboys offense made a habit of taking weeks off sporadically, before returning in a dominant display the following Sunday. Their win streaks on the season show this strange phenomenon:

They managed to finish the season without consecutive losses, but never took off on a tear like Sunday’s opponent. While reaching 13-4 is never easy, Dallas can take solace in knowing that the 49ers only played five games against a team with a winning record (two being the Seattle Seahawks) in 2022, with a record of 4-1 in those games.

Dallas played over half of their games against teams with a winning record, finishing 6-3 against such teams, with only one of those losses occurring post week six (overtime against Jacksonville).

While four of the Wildcard games were decided by a touchdown or less, Dallas and San Fransisco both dispatched their opponents by 17+ points.

The first of these less compelling matchups was far more intense than a 23-41 final would indicate, still within a score deep into the third quarter. The second was over by the half, the intrigue desperately clinging onto Tom Brady’s battle-tested history of last-minute comebacks.

Purdy had a shaky first few quarters before kicking it into playoff mode, finishing with four total touchdowns and no interceptions. The only superior performance of the weekend came from Dak Prescott who returned to his rookie season form with five total touchdowns.

Neither team gave the ball away. Both collected one from their opponent.

Both comfortably surpassed 100 yards rushing for one touchdown.

The 49ers brought down Geno Smith three times while the Cowboys got Brady twice.

The Philadelphia Eagles barely saw their starting quarterback Jalen Hurts through the final five weeks of the season. During this time, they coasted to the #1 seed on the back of their once undefeated 12-0 record. Even if most of the team is at 100%, Hurts got in front of the media last week and declared that his shoulder is still not healed.

The New York Giants never looked like a Super Bowl contender, even at the highest points in their season. They may have been able to close it out against Kirk Cousins and the Vikings, but their greatest test remains ahead of them on Saturday night.

Sunday night’s matchup features the two best teams in the NFC. The former league powerhouses both have five Lombardis, and neither have won a Super Bowl in over twenty-five years (26 for Dallas, 27 for San Fransisco).

The Cowboys battle against an 0-6 record in the Divisional Round since their last Super Bowl.

For the 49ers, the rookie Purdy will take the field knowing that only two rookie quarterbacks have ever won consecutive playoffs games, and none have won a Super Bowl.

Beyond all the narrative similarities of these franchises, there is the similarity of talent at every position.

The list goes on comfortably into the depths of the offensive and defensive lines without too great a disparity at any given position.

The area’s where San Fransisco begins to separate are at tight end and running back, but the gap is slim, potentially non-existent when depth is considered.

George Kittle and Dalton Shultz are separated by less than 200 receiving yards, but Kittle pulled in nine TD’s against Shultz’ seven. However, Shultz production is up lately, with two-two touchdown games in Dallas’ last three games.

McCaffrey is better than either running back Dallas has to offer, but Pollard and Elliott combined have been far more productive than the 49ers RB room as a group:

While McCaffrey offers a passing threat that most running backs don’t, his numbers are not too far beyond Pollards:

The eye test, along with San Fransisco’s dominant win streak, have led many experts to pick the 49ers as the NFC favorite, but the numbers say they have met their match against the underdog Cowboys.