Daniel Jones Breaks the Internet, a Play in Three Acts 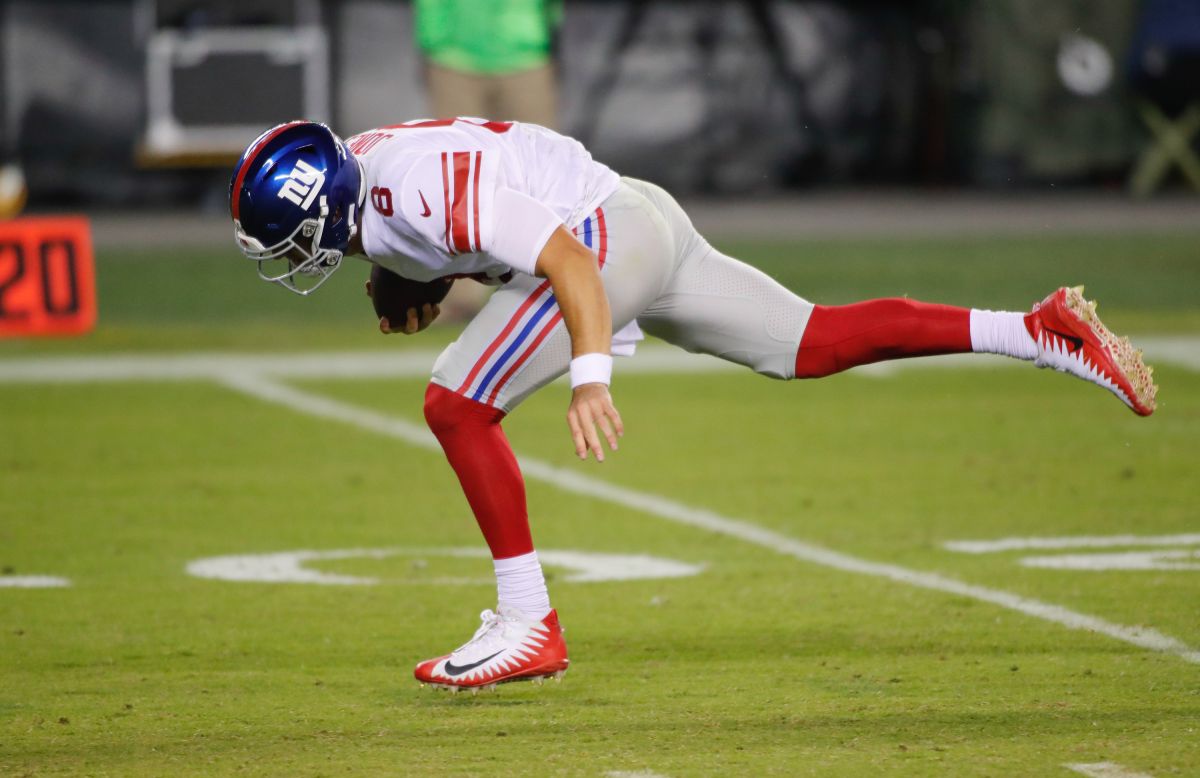 During Thursday’s Giants-Eagles game, Daniel Jones broke off an 80-yard run that took the internet by storm. After much confusion over the stumble, BSP Writer Adam Teich attempts to clear things up by going inside the head of the Quarterback himself. Welcome to the rise, run, and fall of Daniel Jones.

The scene: Lincoln Financial Field. Giants trail 7-10 with 8:51 remaining in the third quarter.

Enter Daniel Jones. Though he hasn’t played the game of his life so far, he must feel lucky to be within striking distance. Only down three, he knows that a solid drive is needed to turn around Big Blue’s fortunes in this game. More so, his career needs a solid drive to mark a turning point. As of now, he knows that his legacy is subpar at best. It’s one of arriving to games dressed as an accountant, failing to protect the ball, and dealing with the scorn of some of the most bitter fans in the game of football.

Jones lines up in the shotgun, and takes a moment of reflection. One has to wonder if this meditation comes from a place of spite. After all, Jones is essentially playing for a football team dedicated to burning itself to the ground. He surveys the left half of his offensive line, doubting the intensity of first rounder Andrew Thomas. Thomas’ penchants for steak dinners, playing piano, and missing team meetings, cause Jones to wonder whether Thomas’ Georgian roots haven’t chiseled him for the rigor of the league. I shouldn’t be angry, he resolves. I didn’t choose my teammates. All I can do is prove myself as a leader and show them how to succeed in this league,

Surveying the other side of his line, Jones finds his temper flaring once more when he spots his tight end. See, Evan Engram’s journey to the league is completely foreign to a player like Jones.  Jones had to fight for his recognition at a basketball school, build his reputation off of veteran leadership, and has always been widely scrutinized every moment he’s on the field. On the other hand, Engram practically made it to the league floating on an inner tube, coasting on his physical talents and never needing to fine tune his game in the face of criticism. His laziness translates to the football field: after all, it’s no coincidence Engram leads all tight ends in dropped passes since 2017. Once again, Jones steels his nerves: I can’t control his work ethic. All I can do is focus on becoming a better Quarterback, and the rest will follow.

He glances at Wayne Gallman, lined up beside him, and wonders if he’s right to ask for something better. After all, when Saquon Barkley got injured, the team specifically brought in Devonta Freeman specifically to prevent Gallman from touching the ball. Injuries are nothing new to Jones, who has spent the majority of his career throwing to backups and third-stringers, his starters fallen victim to chance injury after chance injury.

Once more, Jones begins to become emotional, but something is different this time. He feels no anger, no sadness, no fear. Merely focus. Gone is his familiar expression in which he seems to awkwardly experience every human emotion at once. His face is now that of a man with an insatiable hunger. For the first time in his career, Daniel Jones has decided to take control of his fate.

Jones has made up his mind. Fake the handoff to Wayne, hope the defense bites, sprint like all hell. As he extends his arms towards his running back, he notices something peculiar. Though he’s led one of the worst offenses in football, his call has worked. Every single black jersey has turned towards Gallman. When he pulls the ball back, Jones realizes he’s made a slight miscalculation. Every black jersey has turned towards Gallman except for one. That lone Eagle, of course, is Darius Slay, one of the game’s most feared cornerbacks who spells certain doom for Jones’ dreams of career rejuvenation. Beyond Slay lies 90 yards of open grass, a game-breaking touchdown, a career defining moment. It will all lie in the hands of Engram, the only Giant between Jones, Slay, and destiny.

Jones can only watch as Engram attempts to block his opponent. It isn’t pretty. He attempts a series of bunny hops, almost shimmying his way into Slay, as if trying to lure him out of the play by sheer distraction.

Somehow, Engram’s monstrosity of a block works. When he hits the 30 yard line, Jones takes off into an all-out sprint with a clear path to the endzone. This is his moment of freedom. It’s stepping out of a lecture hall having just aced a final. It’s Andy Dufresne after crawling through a river of feces in the Shawshank Redemption. It’s listening to Springsteen, flying down a dirt road at 100 miles per hour. He closes his eyes, losing himself to the wind in his face, the Boss singing about leaving some small town, never to return again.

I am Usain Bolt.

I am Adonis. I am the Colossus of Rhodes, Zeus, Hercules, all rolled into one. I am…

Slow down, Jones thinks to himself. This is my moment. I have plenty of space. All I have to do is get a grip, regain my footing, and this will all work.

My team needs this. I need this. My allure is built on steady play, and dammit, even if it isn’t pretty, I get the job done. This touchdown will show all who doubted me that Daniel Jones is a winner.

I can’t look like a bust. If I fall here, this play defines my career. I’m on every blooper reel in the nation. Someone will surf the equivalent of the internet in 2051, watch a fail compilation, stumble on me, laugh at me, and turn me into the 2051 equivalent of a TikTok. I’m not a TikTok. I am a Quarterback. I am a winner. I am…

Just like that, the clock has struck midnight. The magic has worn off. Though the Giants manage to cap off the drive with a score, everyone involved knows that lightning doesn’t strike twice. Engram will later drop a perfectly thrown pass from Jones that would have put the game out of reach. Thomas once again becomes a liability, turning his back and allowing Brandon Graham to strip Jones for a game-sealing fumble. No matter. Jones will always have his moment of shining glory. Eyes closed, running blindly into the great wide open, Bruce and the E Street Band propelling him forward. May we all strive to feel as free.