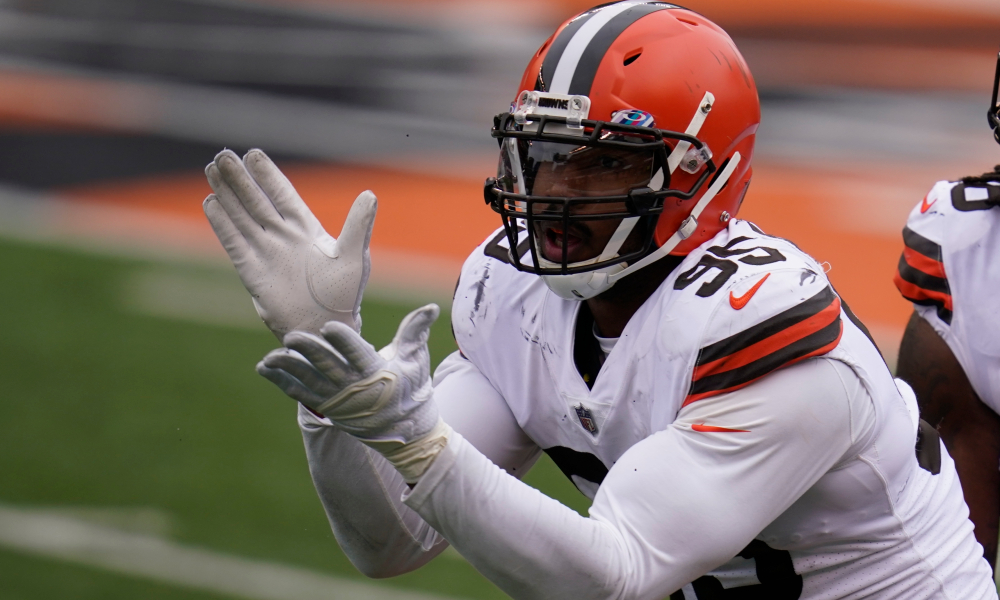 Myles Garrett was a lot of people’s front runner for NFL Defensive Player of the year. He has absolutely lived up to the billing of Defensive Player of the Year. However, Garrett might be gunning for something that only two players in the history of the NFL have done. In 1971 Alan Page won the NFL MVP award as a defensive tackle. In 1986 Lawrence became the second player in NFL to win the MVP as a defensive player (linebacker). It is not an easy task, but if you look deeper into Myles Garrett’s stats this season, you can see that not only is he dominating on defense, but he’s forcing turnovers that the offense has been capitalizing on.

This past weekend versus the Bengals for the second time, this one in the Queen City, Garrett had two sacks including one strip sack. With nine sacks in seven games, Garrett became the second player in NFL history who has done that in back to back seasons. On top of that Garrett has three multi-sack games, and his streak of six games with a sack is the longest in Browns history, and is the longest active streak in the NFL. Defensively it is clear that Myles Garrett deserves all the hype of an NFL Defensive Player of the Year. However, people should be starting to realize that maybe Myles Garrett isn’t just the best defensive player in the NFL, but the best player in the NFL overall.

After the Browns were blown out by the Baltimore Ravens in week one, Garrett went on a tear. The Browns second game of the year was at home versus in-state rival Cincinnati. Early in the second half, Garrett blew by tackle Fred Johnson to sack Bengals quarterback Joe Burrow, who was stripped of the ball by Garrett, and was recovered by Joe Jackson at the Bengals 1-yard line. Nick Chubb ran into the end zone two plays later. With that we check out the amount of points the Browns scored off of Garretts turnovers to seven.

The next week, the Browns took on the Washington Football Team at First Energy Stadium. With about six minutes to go in the game, and the Browns leading 31-20, Washington quarterback Dwayne Haskins took the Football Team on a good drive. However, the Washington offense was stopped just past mid-field by another strip sack by Garrett. Garrett, who already had one sack in the game, once again blew by the left-tackle to strip Haskins, and then be aware enough to recover the strip himself. The Browns then went on a 10-play drive that stalled inside the Washington 10-yard line. Kicker, Cody Parkey, came on to hit a field goal to put the Browns up for good 34-20. Browns Points Scored off of Garrett’s turnovers forced: 10.

The Browns were now 2-1 and flying high. However, their match-up versus Dallas was going to be much tougher than Washington and Cincinnati. With this game being played in Arlington, Garrett had a bit of a homecoming game, as he is from that area. With about two minutes gone in the second quarter, the Cowboys were driving. However, after rushing for a first down, the Cowboys had a first and ten at their own 38-yard line. Dak Prescott took the shotgun snap, and just like that, Garrett was in the backfield sacking Prescott, and forcing a fumble. That fumble was recovered by the other defensive end on the Browns Olivier Vernon. This was the second sack of the day for Garrett. After the recovered fumble, the Browns offense used a 4-play drive to get into the end zone on a Baker Mayfield pass to Austin Hooper. That brings the Myles Garrett Points off Turnovers to 17.

After beating the Cowboys in Dallas, the Browns were looking forward to coming home to play another hot team, the Indianapolis Colts. In this game Myles Garrett didn’t have a strip sack, but did have one sack and four quarterback hits. Late in the game, Myles Garrett along with Sheldon Richardson, Larry Ogunjobi, and Olivier Vernon, put pressure on Phillip Rivers, forced him to step up in the pocket, and throw a pass that was picked off by Browns safety Sheldrick Redwine. The Browns would eventually give the ball right back to the Colts on a Mayfield interception. However, the Browns went on to win the game 32-23. While Garrett didn’t force any turnovers specifically, but his pressure, along with the rest of the defensive line’s pressure, did force an interception. So with that the Myles Garrett Points off Turnovers Stays at 17.

With their record at 4-1, the Browns were ready to travel to the rival Pittsburgh Steeler’s Heinz Field for the first game against the Steelers after last years melee. That melee took place in week 11 last year, and forced Garrett to miss the rest of the year because of his suspension. Tensions were obviously high going into this game. In the end the Browns were humbled by the superior Steelers 38-7. However, Garrett kept his sack streak alive with one against the Steelers to go along with a tackle for loss, and a quarterback hit. Myles Garrett Points off Turnovers Forced: 17

After the embarrassment in Pittsburgh, the Browns needed to regroup and move forward. They were still 4-2 and were facing a big division game at the Bengals. Joe Burrow, rookie quarterback out of LSU, had already name for himself in this league as a tough, skilled signal caller. However, after the crushing defeat at the hands of the Steelers, Garrett and the rest of the defense were ready to put their stamp on this game. While trailing early in the game 7-0, Joe Burrow was once again leading a drive versus the Browns weak defense. Myles Garrett decided it was his time to change the game. Easily cruising by left-tackle Jonah Williams, Garrett hit Burrow and forced him to fumble. That fumble was recovered by Ronnie Harrison Jr. of the Browns. Cleveland kicked a field goal in the ensuing drive, bring the Myles Garrett Points off Turnovers Forced to 20.

Garrett would go on to have another sack in the Bengals match-up, and the Browns won the game in thrilling fashion 37-34. Baker Mayfield threw a long touchdown pass to rookie Donovan Peoples-Jones to walk away with the victory. Garrett and Mayfield seemed to be very happy after the thrilling win, as both were pictured smiling together leaving the field in Cincinnati.

Myles Garrett is having an incredible year for the 5-2 Browns. On the year he has nine sacks, four forced fumbles, two recoveries, and 13 quarterback hits. That stat-line is surely one that can take home the defensive player of the year in the NFL. He leads the league in sacks and forced fumbles. All four of Myles Garrett’s strip sacks led directly to a Cleveland score. Not only is he causing havoc behind the line of scrimmage, but he has also been great defending the run. Garrett’s four strip sacks ended in 20 points for the Browns. To put that in perspective, the Browns have scored 20 points off of Myles Garrett’s strip sacks. That is more points than Josh Allen, Stefon Diggs, Deandre Hopkins, Mecole Hardman, and Jacksonville kicker Josh Lambo. Obviously, Garrett didn’t score 20 points but his impact ends up at 20 points.

It is pretty clear who the leader in clubhouse is when it comes to NFL Defensive Player of the Year. Garrett has more sacks (9) than Khalil Mack (5.5) and J.J. Watt (3) combined. Garrett’s nine sacks is also more than the Detroit Lions, Carolina Panthers, Tennessee Titans, Las Vegas Raiders and the Jacksonville Jaguars have as an entire team. Garrett’s importance to the Browns cannot be understated. While Myles Garrett is having an incredible year, along with corner back Denzel Ward, the Browns defense as a whole is giving up 380-yard per game. It is fair to say that without Garrett the Browns record would be much worse.

Overall Garrett’s pressure has caused a total of six turnovers this year for the Browns. It’s likely Garrett will be looked over for MVP by guys like Aaron Rodgers, Russell Wilson, and even Tom Brady. However, if you look deeper, no player is more valuable to their team than Myles Garret is for the Browns. If he can keep up this record-breaking tear he’s on, Garrett could possibly finish in the top three of MVP voting come year’s end.