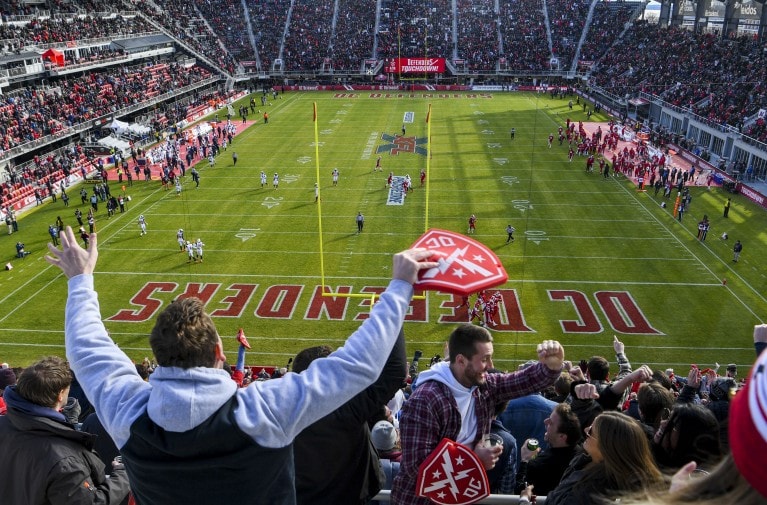 The DC Defenders took care of business in week one, but a greater challenge lies ahead on Saturday. The Defenders will take on the New York Guardians, who are coming off the most dominant win of the week one slate.

In a 23-3 win at Metlife Stadium, the Guardians allowed over 400 yards of offense to the visiting Vipers, but kept them out of the end zone entirely.

The Defenders and Guardians held true to their names in week one, both forcing multiple turnovers in big spots. They are similar teams in many ways, but there are a few areas the Defenders can exploit to earn their second victory of the season.

Stopping the run: Possibly the biggest weakness that the Defenders showed on Saturday was their inability to chase down the ball carrier to the outside. They locked down most of the long pass plays, but didn’t have the speed or positioning to cover run or screen plays. Shutting down the speed and truck-stick ability of Guardians’ running back Darius Victor needs to be a top priority.

Using the RB Duo: Jhurell Pressley and Donnel Pumphrey managed only 39 combined yards on Saturday and Cardale Jones put up 28 rushing yards on his own. The Defenders never gave up on their run game, but finished with under 2.5 yards per carry. If the Defenders want to open up the downfield plays for Cardale, they’re going to need to learn how to use their running backs efficiently.

Going for Three: The Defenders converted only one out of four extra point tries on Saturday, so why not back it up to the ten? Space out the defense, give Cardale a little more time in the pocket, and let the running backs block or run routes. Worst case scenario is earning zero extra points, which is no worse than a missed attempt from the two or five yard line.

Khari Lee: The Defenders only utilized their tight end once on Saturday and it went for a 39-yard score. Cardale ended up with the ball after a successfully confusing double reverse flea flicker and found his tight end at the 18 yard line. After the grab, Khari weaved through three Defenders and rolled his way across the goal line. Using Lee on Saturday would add a necessary third dimension to an offense that struggled to finish drives against Seattle.

The Defenders balled out in front of their home crowd on Saturday, but now is not the time to celebrate. One of the leagues’ best defenses is coming to town to spark what could not only be a great North East rivalry, but a potential preview of the Eastern Final on April 18th.

Be sure to check out the new XFL app to shop tickets and get league-wide news.