Deebo Gets Paid, What Next For the Niners? 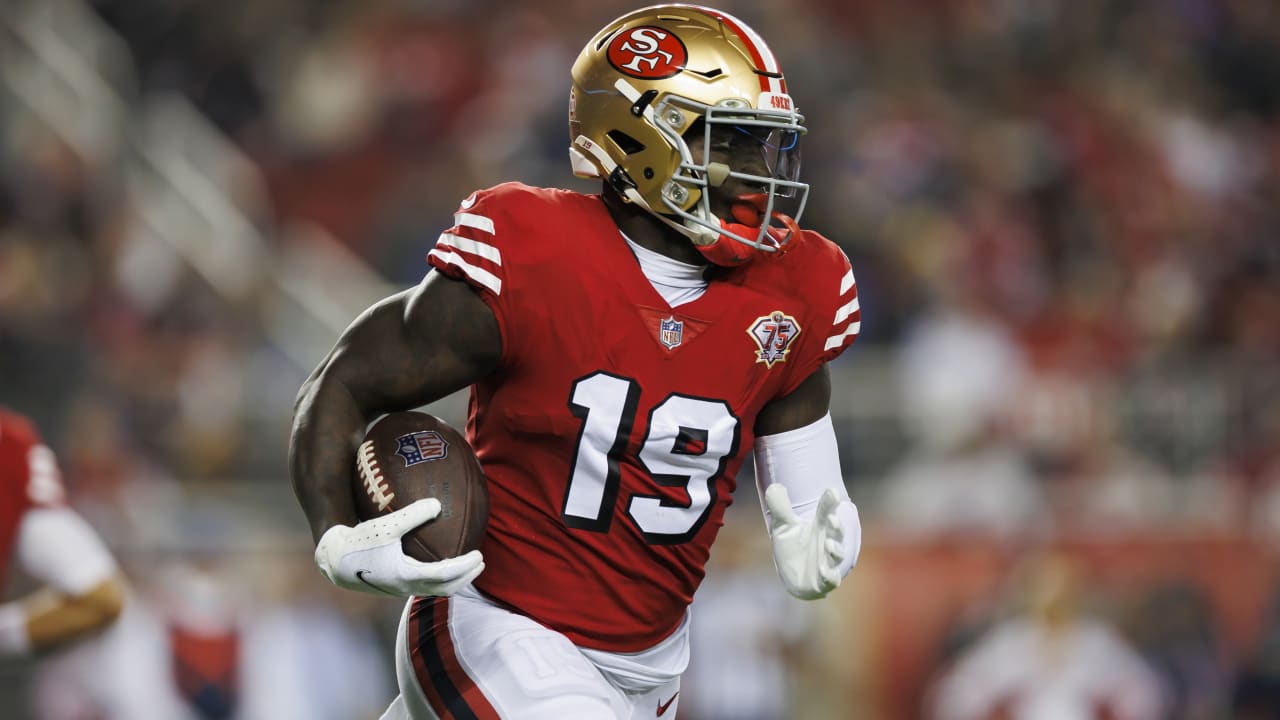 What an offseason it was for wide receivers… From superstar Davante Adams signing the largest deal ever for the position and leaving his longtime home in Green Bay. In addition, others like Christian Kirk, A.J. Brown, and Terry McLaurin benefited from large paydays as well. Resetting the market once more.

In the last week, both DK Metcalf and Deebo Samuel have also enjoyed new contracts. Joining the new list of wideouts making 20 plus million a year. Where in Samuel’s case, finally sees an end to the countless storylines that have plagued the 49ers all summer.

With him now back on the field and secured once again as the Niner’s star playmaker for the near future. What does this deal mean for the team and its future? Where do they stand in a seemingly wide-open NFC?

San Francisco was firm on keeping their guy after an explosive campaign in 2021. According to Ian Rapaport, the deal is a three-year extension worth up to 73.5M, with 58.1M guaranteed. Along with some interesting incentives that are based on Samuel’s running production. With another 650,000 to be had each season if the “wide-back” (as they now call him) rushes for more than 380 yards and 150,000 if he scores three rushing TDs.

After so much talk about whether Samuel opposed his role in the running game and that he wanted to be in a new offense. Many of these reports carried a lot of smoke but no fire. As the star stated on Tuesday, after finally being able to speak on the matter. “That’s False,” he said. “There’s a lot of things that came out that I wanted to speak on, but at the end of the day, I wasn’t allowed to. You can turn on the tape or go back to the Cowboys game. It kind of shows what kind of player I am. And also, you can go turn on the Pro Bowl tape and like what I said about being a wide back, I don’t mind doing whatever it takes for this team to win.”

He also added that “communication” was a big part of getting the deal done. Highlighting that the change in communication is what brought the two sides to a deal, just a few months following his trade request from the team. It remains unclear what drastically changed from then as he chose not to add any details to the matter.

Back at Full Strength

The team now looks to the season ahead, as the focus turns to maximize their playmakers like Deebo. Similar to last season, where he racked up over 1700 total yards and 14 total touchdowns. The offense will be relying upon him greatly to produce in a multitude of ways and take the pressure off young quarterback Trey Lance.

Head coach Kyle Shanahan reemphasized his belief in the wideout and his ability to be so versatile. “He inspires me more than almost any player I’ve watched on the field. The way he runs the ball, whether you’re handing it to him, whether you’re throwing it to him, or whether he’s catching it on a kick. These aren’t things you have to talk him into doing. He usually talks you into doing. Deebo loves playing football and he loves helping us win. And that’s what everybody sees on Sunday.”

The 49ers are truly becoming a scary team and possibly even a dark horse in the NFC to some. With a defense that has been man-handling the offense in a week’s worth of training camp so far. Who I believe to be a top-five unit in the league. After coming off back-to-back seasons finishing in the top seven in total DVOA. Is also now joined by an offense that has a mind like Shanahan guiding it. Led by an athletic, cannon arm quarterback that they have yet been able to experience before. Add in skill players such as George Kittle, Elijah Mitchell, Kyle Juszczyk, Brandon Aiyuk, and Deebo Samuel. There is some noise to be made in San Francisco.

Fellow NFC teams will have their hands full. Many of whom have many questions to answer themselves. Teams like the divisional rival Rams who as reigning Super Bowl champs look to repeat their success from a year before. A task many find all too challenging to repeat. The Packers who lose arguably the best wide receiver in football and look to fill the void. While in the south, Tampa Bay appears to pose the greatest threat but that all will rely on Tom Brady being great once more at age 46.

As the season comes nearer, the 49ers center on finishing what they have come so close to the past few years. Bringing a Lombardi trophy back to the Bay. Samuel’s extension is a massive step forward to that. Especially with Nick Bosa and others awaiting to get paid as well. The championship window is wide open.

Week one couldn’t come any sooner. As for now, the Niners can now get back to the product on the field and prepare for their first preseason game at home against the Packers.