Defenders Dominate Both Sides of the Football against the Dragons 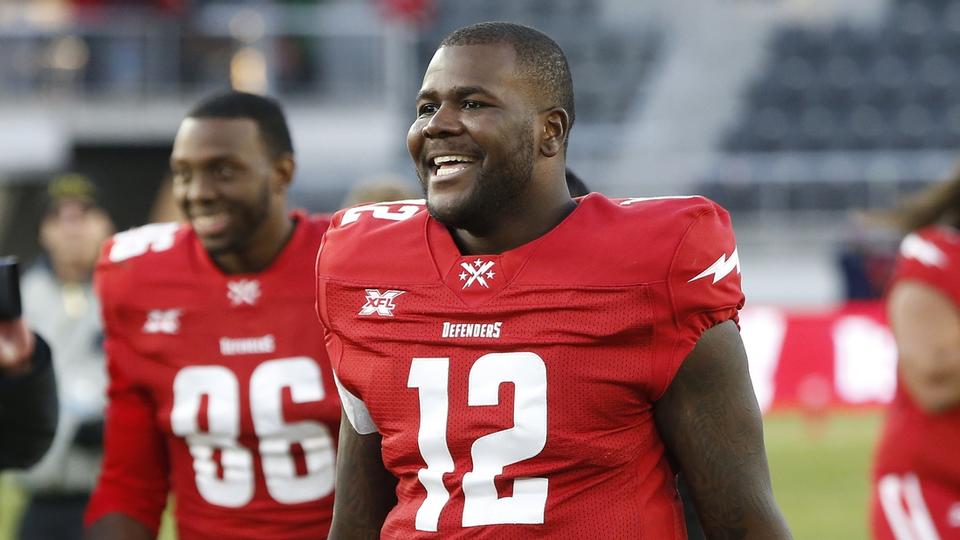 It took a couple quarters for Cardale Jones and the Defenders offense to find their stride, but the Defenders’ secondary and special teams helped keep the game close until the offense could catch up.

They forced turnovers all game long, keeping the Dragon’s otherwise efficient offense off the field. They managed to keep within four points of the Dragons as they received the ball in the final minute of the first half.

With five seconds left in the second quarter, Ty Rausa took the field to attempt a 55 yard field goal. He had missed his last field goal attempt from 35 yards, and with heavy wind in the wrong direction, fans audibly questioned the decision to send the kicker back on to the field.

Against the odds, Rausa got just enough to send the ball over the post and the Defenders entered halftime only down by a point.

This shift in momentum carried them into the second half as they drove down the field and finished it off with a double reverse flea flicker from Cardale Jones to the TE Khari Lee for a 39 yard touchdown.

The game stayed within a possession (which is nine points under the new XFL extra point rules) until Bradley Sylve took an interception 69 yards to the house to put the Defenders up 31-19 just two minutes into the fourth quarter. Neither team scored again after the pick-six as the Defenders managed to keep the ball out of the Dragon’s hands for most of the final quarter.

One of the most important factors in the game was the crowd noise and enthusiasm that stayed constant til the end. The Defenders almost maxed out their stadium’s capacity with 17,163 out of 20,000 seats filled.

Staff at the stadium gave out red shields for the fans to hoist in support of the team and many fans entered the stadium already having purchased jerseys.

The team has the talent, unity, coaching and fanbase to make a run at the XFL championship. Next week they will host the New York Guardians, who trampled the Tampa Bay Vipers earlier today 23-3. If Dallas manages to to defeat the BattleHawks this evening, home teams will have gone 4-0 on opening weekend.

Hopefully the Defenders can build enough confidence in next week’s home game to carry them through the three straight road games that lay ahead on their schedule.

After this week’s showing, it’s going to be even harder to keep this Defenders team out of the number one slot in the XFL power rankings.