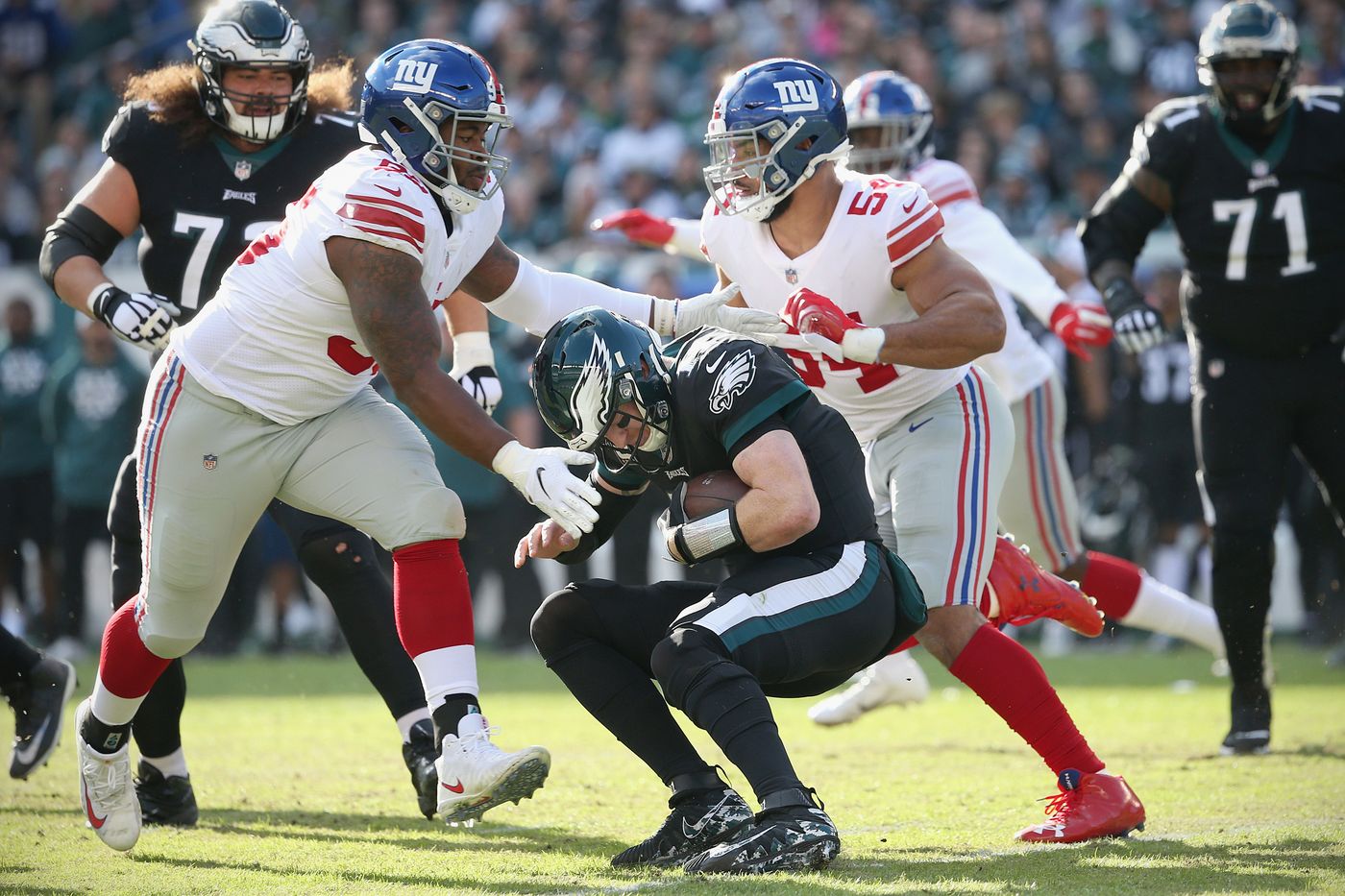 If you had to describe what happened at Philadelphia between the Eagle and New York Giants earlier today it would be labeled  a game of two halves.The first half dominated by the Giants and star rookie running back Saquon Barkley, the second half, well not so much.

The Giants have lost five consecutive games in Lincoln Financial Field, the last three by a combined 11 points. This was their second straight three-point loss in Philadelphia on the foot of  kicker Jake Elliot. The Eagles have tied the all-time regular-season series at 83-83-2 with today’s win.

Last year Elliot hit a  61 yard field goal to close out the Giants. Today Philly put Elliot in a successful position today after trailing for majority of the game after  the Eagles took a 22-19 lead at the 10:11 mark in the fourth quarter.  Carson Wentz helped lead the team on a seven play, 61 yard drive down the field which ended with a Josh Adams one yard run.

After the Eagles took their first lead of the ball game, the Giants went down the field on a eight play 56 yard drive which took 4:52 to tie the game on a Aldrick Rosas 29 yard field goal with 5:49 left in the game. With a worn out defense and no timeouts remaining, the Eagles controlled the clock and put Jake Elliot in a position to hit a 43 yard field goal to eventually close out New York to improve to 5-6 on the season.

Big Blue fell to 3-8 as their two-game winning streak was snapped and fell to 0-4 in the NFC East, including 0-2 in division road games.

Saquon Barkley caught a 13 yard pass from Eli Manning to cap off a nine play 75 yard scoring drive which took 4:22.  It was the second game in a row and fourth time this season they scored a touchdown on their first offensive series.

Barkley rushed for 101 yards on 13 carries, including a 51-yard touchdown, and caught a team-high seven passes for 41 yards, including the 13-yard score on the game’s first series. Another game highlight came with Barkley’s 50 yard touchdown run.

“It was a great call first and foremost,” Barkley said. “The offensive line blocked it up tremendously. I was able to get a one-on-one, the wide receiver did a great job blocking down field, and I was able to use my speed to find a way to get into the end zone.”

Manning finished 26/37 for 297 yards one touchdown, and one interception but was held in check in the second half after a dominating first half that saw the Giants take a 19-3 lead at one point during the second quarter. Eagles safety Malcolm Jenkins picked Manning off on the final play of the first half, ending his streak of passes without throwing an interception at 99.

“It started off fast, had some good drives in the first half, close on a couple of other ones,” Manning said. “Second half obviously we didn’t execute well enough, had some penalties, had some plays that were close that we just didn’t quite make, and unfortunately just kept us from extending some drives and moving the ball and scoring enough points.”

“We weren’t making the yards we need to on the plays we called, and we had penalties that knocked us off,” said Giants Head Coach Pat Shurmer. “So then you get away from the stuff that you certainly would like to do and that’s the deal.”

-Tight end Evan Engram pulled his hamstring in pregame warmups, and did not play.

-Wide receiver Russell Shepard caught a 29-yard pass in the second quarter, his second-longest reception of the season.

-The 100-yard rushing games was Barkley’s fourth of the season, a record for a Giants rookie.

We will have more coverage of this game and start previewing Giants -Bears Starting Monday!!