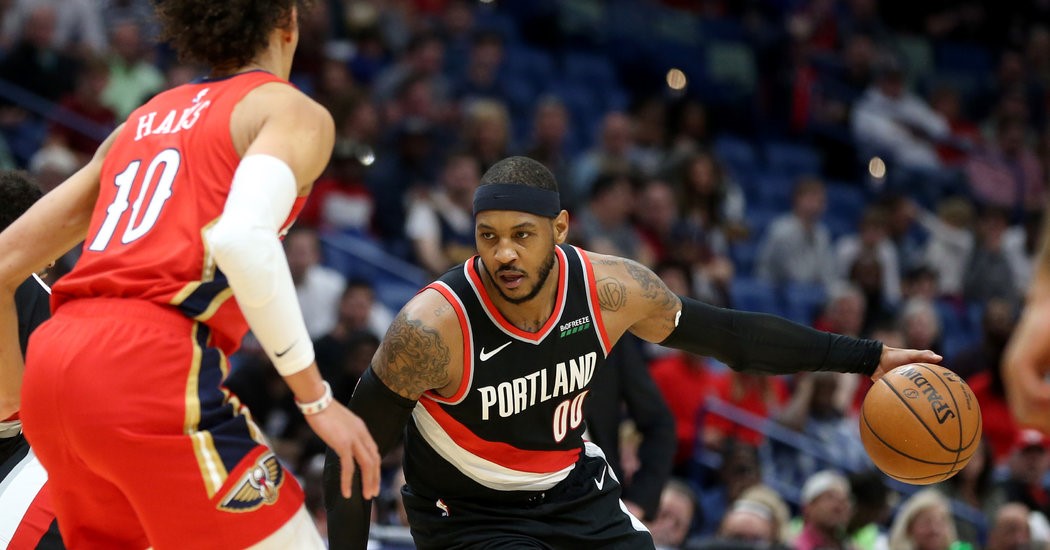 Carmelo Anthony’s Mysterious exit from the NBA has one been one of the real head- scratchers for fans of the All-Star forward. A seemingly tailor-made stint with the Rockets, who shoot early and often ,while playing minimum of defense, ended with Anthony’s  unceremonious release from the squad. His name has come up multiple times, but until this week it looked like his career might be over.

Already thin on the front line and now missing Damian Lillard due to back spasms , the Blazers not only signed Anthony, but dropped him into the starting lineup. Not surprisingly, he struggled a bit in his first game, scoring 10 points on 4/14 shooting while grabbing 4 rebounds in 24 minutes of a 114-105 loss to the Pelicans. Nonetheless, there is optimism from both sides in Portland’s camp.

“For having (only) a morning shootaround, I thought he was pretty good,” Blazers coach Terry Stotts added. “I thought every shot he had, he was getting a good look at the basket.”

Carmelo was signed to a non-guaranteed contract over this past weekend. He joins a Blazers squad that now sits at 5-10 on the season. Portland has brought Carmelo in to hopefully provide a spark for them. They have not played up to expectations through the first 15 games.

Portland ranks towards the bottom in most offensive categories. They are 30th in assists (18.6 per game), 24th in FG % (44%), 13th in offensive rebounding (10.6 per game). There is reason to believe that Melo can help improve some of these numbers.

Head of basketball operations, Neil Olshey, spoke highly of the 10 time all star, “Carmelo is an established star in this league that will provide a respected presence in our locker room and a skill set at a position of need on the floor.”

It will take some time for Melo to gel with his new teammates out in Portland. He didn’t look terrible in his debut. He still uses his back down fade away moves. It looks like for now that he is going to play his old school style of basketball. He has nothing to lose. He’s in a situation where he can only help, not hurt this Portland team in desperate need of a spark.