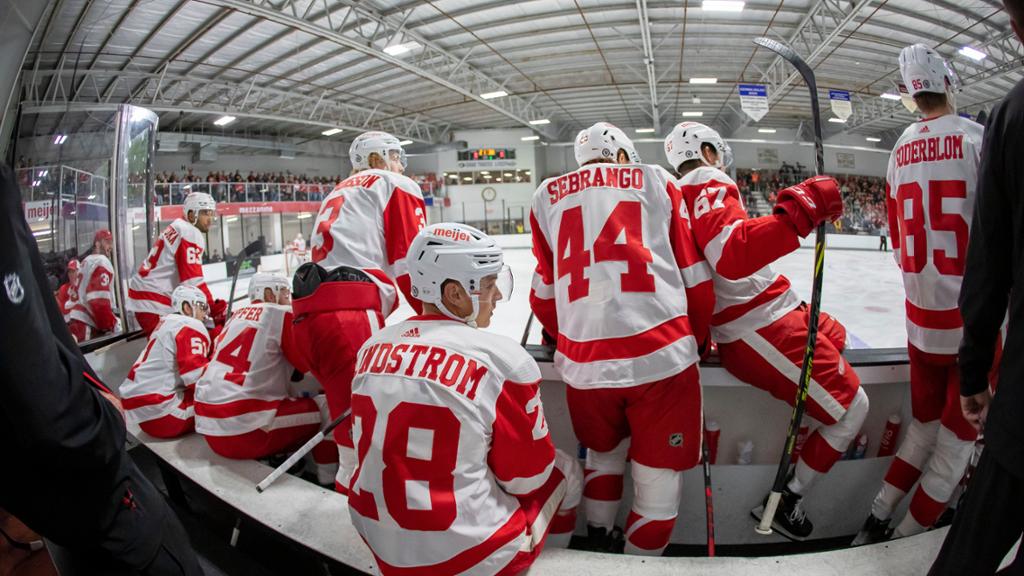 It’s June 1998. You and your siblings are eating Little Caesar’s Pizza while playing Mario Kart 64 for the Nintendo 64 and drinking Faygo Rock n’ Rye. School just ended and you don’t have a worry in the world. No worrying about bills, taxes, or a job. You’re also a Red Wings fan who’s celebrating their Stanley Cup sweep over the Washington Capitals. Mom and Dad take you to the parade on Woodward Avenue to see Steve Yzerman, Sergei Federov, and Brendan Shannahan. Life is good.

Detroit Red Wing fans are hoping for that same nostalgia with this current group. Yzerman gave Detroiters four Stanley Cups during his time with the iconic franchise as a player. He also produced memorable moments such as his playoff goal against the St. Louis Blues in 1996, leaving fans in awe. He’s hoping to duplicate his success as a general manager, building up a talented roster the same way he did in Tampa. What does this year have in store for Motor City hockey fans?

First off, Jeff Blashill and his bland personality are gone! No more mundane interviews and lack of accountability from the head coach. Taking his place is Derek LaLonde, who was a former assistant head coach for the Tampa Bay Lightning.

Also, Andrew Copp from Ann Arbor is now a Red Wing! Copp brings a playmaking ability to a young team and will serve as a trustworthy veteran for the squad. Plus, his last name is Copp and Detroit has Robocop. Dead or alive, your goalie’s coming with me!

Joining him are David Perron and Dominic Kubalik, who are solid left wingers. Breakout goaltender Ville Husso was also acquired for a third-round draft pick. The big goalie covers a lot of space (and I mean a lot) and is getting better at tracking the puck. There is also Olli Mattaa (that’s a fun name to say), Alex Lyon, and Mark Pysyk, who are just happy to be here.

If you haven’t noticed, Yzerman’s plan is bringing in established veterans to lead the young group. This’ll pay dividends for the team, for it’ll bring accountability and lessons for the Red Wings to learn. Such a build turned the Lightning into their current dynastic group, and Wings fans are hoping for the same.

Last season saw the emergence of Lucas Raymond and Moritz Seider, with the latter winning the Calder Memorial Trophy last season. With more prospects such as Simon Edvinsson arriving, the team’s going to be hungrier than ever.

However, they’re still playing in the Atlantic Division, which houses so many tough teams. The Florida Panthers came out of nowhere and kicked everyone around. The Toronto Maple Leafs are dominant in the regular season before folding in the first round. Nobody knows how the Boston Bruins keep sticking around, for they don’t know how to drop dead. And the Tampa Bay Lightning are the same dominant force that literally makes the Stanley Cup Final every year.

The competition doesn’t get easier from there, though. Buffalo made a significant leap last season. Ottawa has emerging lines from the first to the last and just got Claude Giroux. Montreal has a new identity. This season’s going to be a tall task for the Red Wings.

But there’s one saving grace for Detroit: allowing goals. The Wings are built to not allow many goals, as made evident by Yzerman’s drafts and signings. From trading for Alex Nedeljkovic to drafting Seider, Detroit will be tough to score on. Niklas Kronwall may be gone, but his bruising style still lives on in the Motor City vicariously through this unit. There are also plenty of playmakers on each line, which is a promising sign.

Still, it’s going to take a year for this young group to develop. The Wings must do better on the penalty kill (73.8% last season, last in the NHL) and stand up to the divisional competition. I’m going with a record of 36-37-9, which will be good for 81 points, but not good enough for the playoffs. It’s not a knock on this team, though. It’s just that the Atlantic Division is simply too good. When you produce the last four Eastern Conference champions, you know your division is truly legitimate. Wings fans will have to wait another year for the glory days to return and for “Wings, My Red Wings” to blare at full blast.

I believe that Elmer Soderblom is a player that’ll make the team. Soderblom’s having a solid rookies tournament outing and is a big forward. Wings fans will love him because of this and will remind them of the forward version of Kronwall.

Also watch for newly signed Austin Czarnik. Czarnik might not be the biggest player on the team. However, he’s quick and handles the puck well. He’ll be great for providing the Red Wings some depth at the center position.