Devils Show Off Across the River 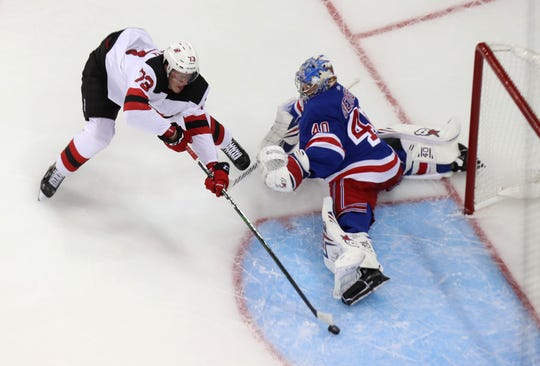 The New Jersey Devils showed fans what they had on deck waiting for them in Monday’s big win. Offseason additions P.K. Subban, Jack Hughes, and Nikita Gusev made their first appearances with the team and showed off what the team is capable of doing.

Wednesday, across the Hudson, the New York Rangers showed off what they had, as well, but with big names like Artemi Panarin, and Kaapo Kakko.

The Devils’, Nico Hischier scored with only 37 seconds into the game. Hischier wasn’t the only one showing off his stick skills; goals from Brett Seney, and new Devils comers Mikhail Maltsev and Gusev showed this long-time rival that they are here and ready this season.

During this game, the vibe was definitely not like a preseason game. The constant battle for the puck and set ups for big plays did not feel like the old Devils hockey we are used to seeing. It almost felt as if there was a fight for a playoff spot. The rivals had a lot of high impact hits, punches, and hard shots.

Continuing on with the rival over the Hudson; fans wanted to see one thing tonight – Hughes vs. Kakko. The first rounder and second rounder did not come face-to-face on the ice. Kakko got plenty of playing time, even being part of key plays made by the Rangers for the rival game. The first rounder, Jack Hughes, was not in the lineup for the Wednesday night game.

A man familiar to Devils fans was Cory Schneider, who made 27 saves in the first two periods before being replaced by Evan Cormier in the third period. Cormier finished with 12 saves in that time.

The Devils are coming home to back-to-back home games this weekend. Fans will see if the newly revamped team will keep showing off and what they have up their sleeves as they will host the two New York teams. They play the Rangers on Friday and have a highly-anticipated match against the New York Islanders when they visit on Saturday.