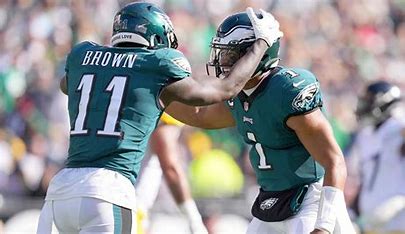 The Philadelphia Eagles (7-0) are coming off a 35-13 win against the Pittsburgh Steelers (2-6). Their offense is currently averaging 395.4 yards per game, third in the NFL. On the other side of the ball, they are only allowing 298.4 yards per game, fourth in the NFL. The Eagles continue to impress the entire NFL with the way they have been dominating their opponents in all three phases of the game. They are coming off a short week to play the Houston Texans in Houston.

The Houston Texans (1-5-1) are coming off a two-game losing streak. Their offense is 31st in the NFL with 288.7 yards per game. On the defensive side of the ball, they allow 403.6 yards per game, third-most in the NFL. The Texans are simply not a very good football team. Head Coach Lovie Smith has a lot to fix in Houston before they become a playoff team again.

Hurts continues to make his case for MVP. He currently has the second-best odds behind Josh Allen to win the award. Last week against the Steelers, he threw for 285 yards and four touchdowns (season-high). He has recorded a 67% completion percentage, throwing for 1,799 yards, and 10 touchdowns with only two interceptions. Hurts should be able to throw and run all over the weak Texans’ defense this week.

The second-year quarterback out of Stanford is struggling halfway through the 2022 season. Davis Mills has thrown for 1,502 yards with eight touchdowns and six interceptions. Mills has shown flashes to be great but the overall state of the Texans does not help him much. He more than likely will struggle again an Eagles defense in primetime.

Do not let Dameon Pierce get going: The rookie running back out of Florida has shown he can run the ball in the NFL. On 121 carries, Pierce has 539 yards and three touchdowns on the ground with another 98 yards and one touchdown receiving. The Eagles give up 114.7 yards per game on the ground. If Pierce can get a rhythm he could possibly have a big game, the Eagles’ front seven needs to prevent that.

Keep the offense rolling: The Eagles’ offense has been tearing through opposing defenses all season. Much of the same needs to happen on Thursday. A.J. Brown had his best game as an Eagle with 10 receptions for 156 yards and three touchdowns against the Steelers last week. So many players get beat you on a week-to-week basis on the Eagles. If it is not Hurts it will be Miles Sanders, if it is not A.J. Brown it is DeVonta Smith, that is what makes this team so good. With another good game out of the offense looming, look for another Eagles win.

Another week, another win. I do not see this game being close especially as it is a primetime game. The Eagles will want to continue to prove the doubters wrong and dominate in the spotlight. The Texans have not shown any indications that they can beat a powerhouse of a football team this season. As always though, the Eagles cannot underestimate the Texans, that is when bad things can happen.