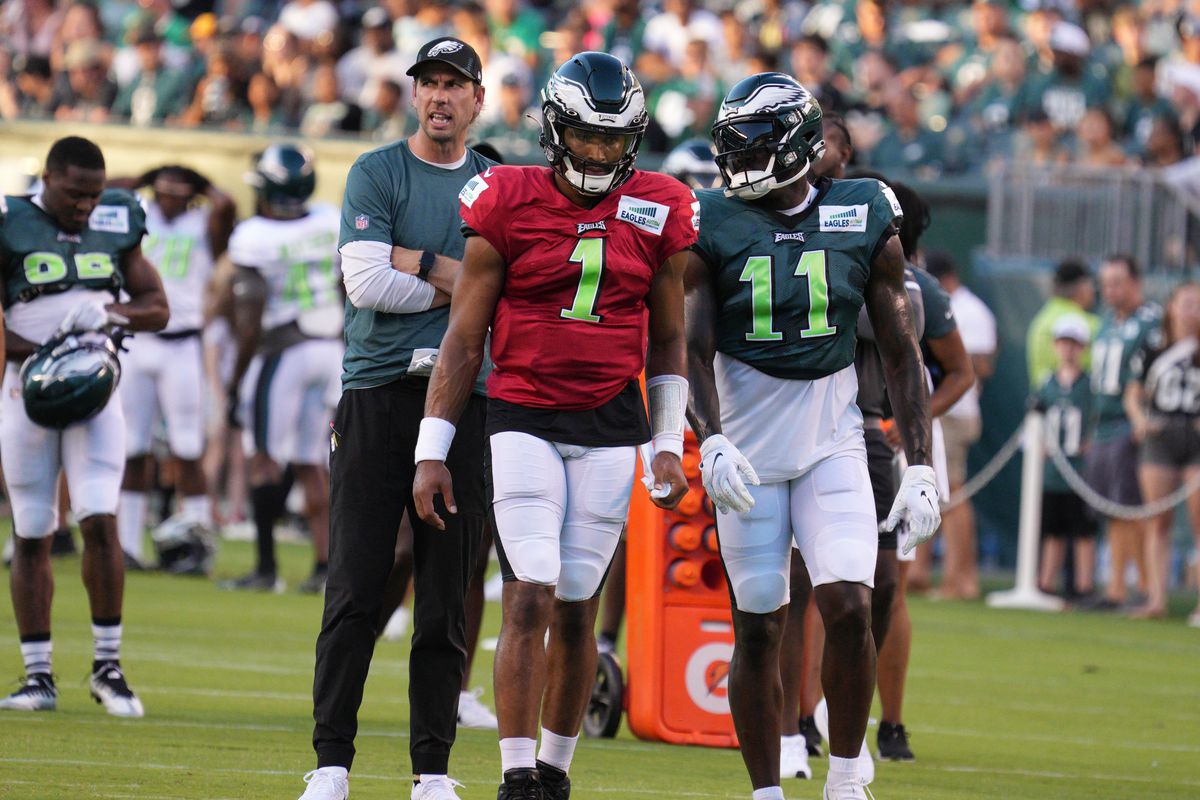 The dog days of NFL training camp have arrived for most players throughout the league. The long, hot August days with meetings, practices, and more meetings away from their families have players wanting the season to begin.

The Philadelphia Eagles are only 25 days from their season opener against the Detroit Lions. And so far throughout camp, the Eagles look like they will be able to compete with the best in the league this season.

In the first preseason game against the New York Jets, the Eagles’ first-team offense and defense looked impressive. Jalen Hurts went 6/6 with 80 yards and a touchdown to Dallas Goedert on the opening series.

Even though it was only a preseason game, Hurts looked exceptional in his first real action of the 2022 season. He was calm in the pocket, went through his reads, and made all the right decisions in his only series of the night. Philadelphia fans could not have asked for more out of their starting quarterback.

There have been many reports throughout camp that Hurts has improved his game in all aspects. This team will only go as Hurts goes. If Hurts can stay consistent this season this team can certainly make a deep playoff run.

Both former Georgia University Bulldogs have shown that their game will translate to the NFL. LB Nakobe Dean flew around on the field making plays while running with the second team. DT Jordan Davis has also made his presence known throughout his first NFL camp. A video circulated of him driving C Cam Jurgens back about 8 yards in a drill during practice. It showed his strength and size will be valuable in the trenches. Both rookies will look to make an impact on the defense this season.

Both A.J. Brown and Devonta Smith are having exceptional camps. Hurts loves having Brown as a new target and have looked very comfortable getting him the ball.

A front four of Haason Reddick, Derek Barnett, Brandon Graham, and Jordan Davis have also seen the field together. Any opposing offensive line will have a long day going up against those four with other players like Fletcher Cox and Javon Hargrave rotating in. The defense as a whole this season has the talent to terrorize offenses week in and week out if they stay healthy.

RB Miles Sanders is now dealing with a hamstring injury. This is a major concern given his history of being injured, and missing eight games in the past two seasons. He had no carries against the Jets on Friday but did catch two passes for 20 yards. Hamstring injuries are not easy to recover from and can linger throughout a season. Hopefully, Sanders can rest and heal up before the regular season begins.

The Eagles, like the rest of the NFL, have to cut down their roster to 53 on August 30. Their first cuts from 90 to 85 happened on Tuesday. That cut included WR Lance Lenoir and CB Jimmy Moreland.

The Philadelphia Eagles will have two joint practices with the Cleveland Browns this week before their second preseason game against them on Sunday afternoon. This will be another great opportunity for players to showcase their skills against another playoff talented team.

Only about two weeks of training camp remain as the Eagles will try to tune up the team as a whole before their week one preparation. As the NFL kickoff gets closer and closer the anticipation only rises. Philadelphia fans are expecting a big season out of their beloved Eagles.