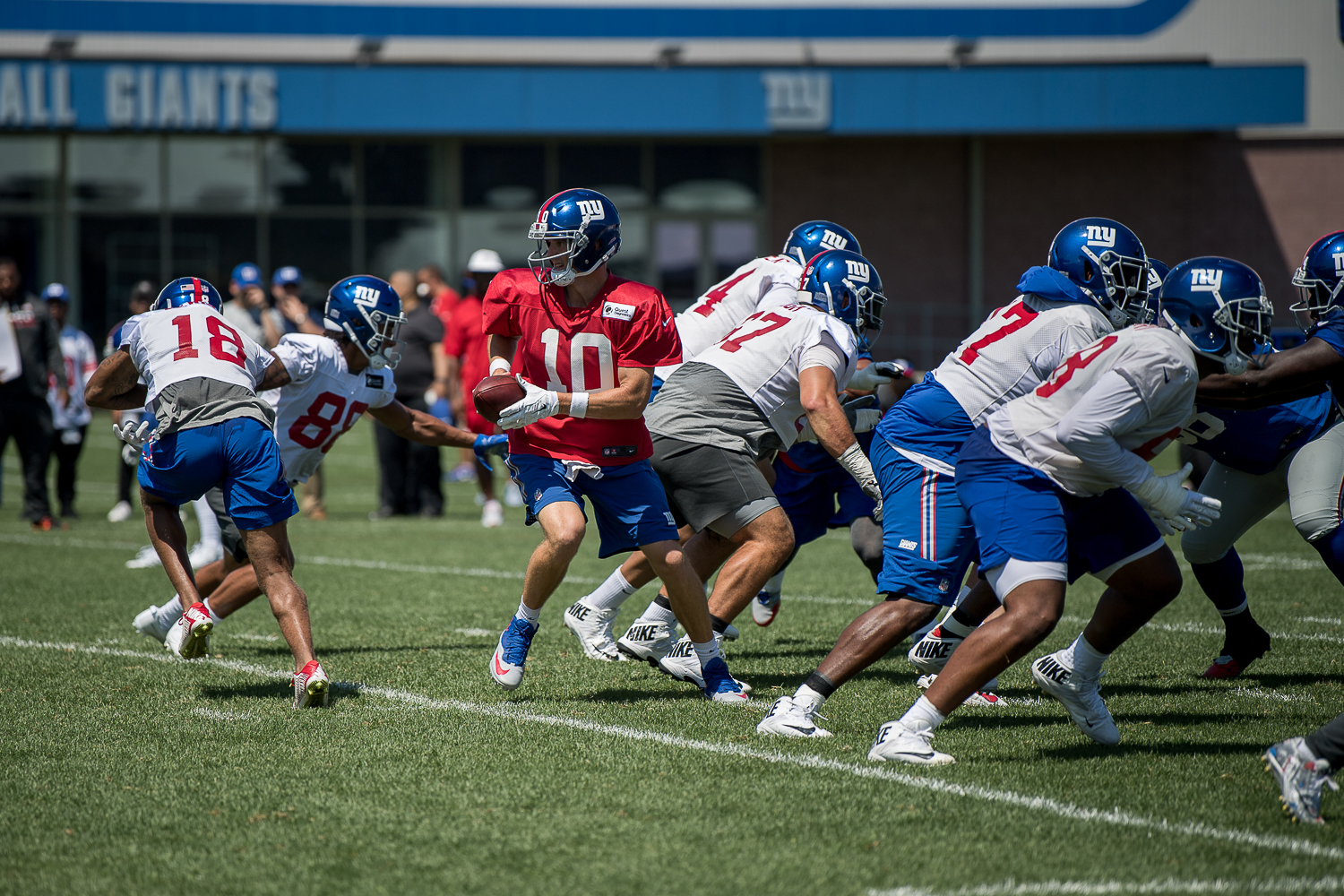 Eli Manning is entering his 16th season in the NFL. All 16 seasons have been with the Giants. He has thrown 360 touchdowns, and 55,981 passing yards. His greatest achievement that he carries with him is that he is a 2x Super Bowl Champion. Entering another year as the starting quarterback he is excited and focused on leading this football team.

“I think it is going well” said Manning. “Made some good plays and we are throwing the deep ball well. Always room for improvement. Missed a couple throws here and there getting back on the timing of things with the receivers. Throwing live action and some one on ones.”

“There is always things you want to improve on and that you wish you had back but I think for the most part, I feel good. I’m comfortable within the offense and with the protections. Just getting everything lined up and the plays called. Just different from last year at this time when we were trying to figure out what was coming in. I think guys are playing well. Off to a good start.” Eli’s response on how everything is going so far in minicamp.

Eli is the guy heading into the 2019 season. The coaches and front office have also said that he is their quarterback. The Giants drafted Daniel Jones with he 6th overall pick in the draft, but that is for the future. Eli is there to mentor and teach him for when his time is up.

Eli knows Jones is right there behind him, but doesn’t see Jones as being the main reason for competition. When asked on what drives him, he stated “I think you are driven because it’s football and you have a job to do and you want to win games.

Eli is calm level headed player. Nothing bothers him. He feels that even with a young quarterback behind him that nothing has changed from past years. “No, practices are the same. Always competitive, always want to go out there and perform well and make the throws that need to be made.” Eli said when asked if practices feel different with a guy like Jones behind him.

Manning is going to go out every day and work hard. He is the starting quarterback of the New York Giants. He is an experienced guy, and isn’t going to let a top draft pick distract him from doing his job.

He definitely knows that the team has prepared for his departure since he is 38 years old. He is not looking at the situation as a competition, but a grind to just get better every day and make the best plays that he can.

Since he is 38 years old, there are going to be questions about his health. He did have something to say about how he feels physically, “It’s maintaining, I still feel good. Some years you have things that are nagging you. I think I’ve tried to attack those things that have nagged me in the past and kind of have a plan to try to prevent those things from coming back. I feel good right now and now it’s just a matter of making sure you keep it that way.”