Elliott wins Talladega thriller; What to expect from Charlotte 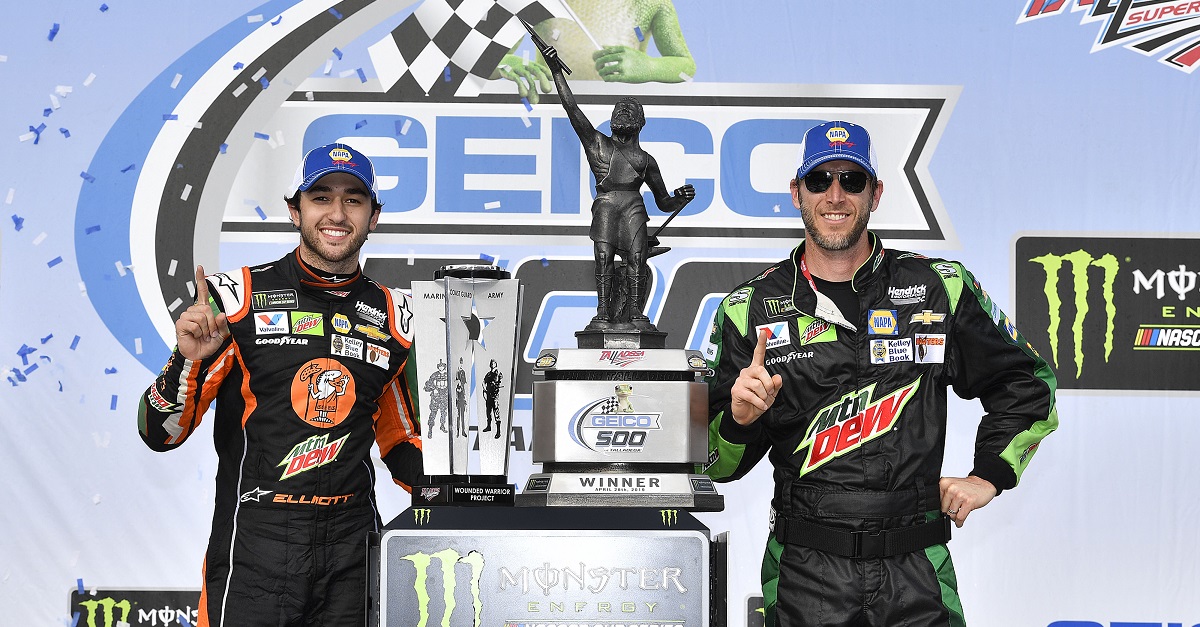 This past Sunday, the stars of the cup series rolled into Alabama to take on the nastiest track on the circuit, Talladega. Most if not all expected Talladega to be a hectic race, due to its reputation of Talladega. Talladega is known for close-pack racing, which in turn results in the big wrecks, also known as “The Big One.” Talladega and its’ sister track, Daytona, rely on the pack racing style as well as bump-drafting. There was no shortage of action-packed pack racing throughout the day at Talladega.

Talladega has always been a hit with fans due to the close racing, as well as its’ pack-racing. As previously stated, Talladega is known to be hectic and is known for its’ pack racing. Talladega is all about momentum, which is why there is always pack racing and there are almost always close finishes at this track. Right from the start, it didn’t take long for the aggressive bump-drafting to start throughout the field. Thankfully, there were few incidents throughout the race aside from a multi-car wreck on lap 24 due to a bump draft gone wrong. Some would argue it was a calmer Talladega race, but the bump drafting throughout it says otherwise. Some fans and analysts were concerned that the race was going to have single-file racing for almost the entire race.

Thankfully, for both the fans and drivers, there was side-by-side pack racing the entire time, and only the one multi-car wreck on lap 24. The final stage was run entirely under green flag conditions until a caution, due to a stalled car on track, with six laps to go forced the field to bunch up, for a two-lap shootout. Chase Elliott would win at Talladega for the second time in his career, in a photo finish. Elliott has an automatic pass to the round of 8 and is the first playoff driver to win in the playoffs this season. This race proved that there don’t have to be big crashes at Talladega and be a good race. But perhaps, with what was announced a few days before Talladega, fans and drivers should be thankful that there weren’t any hard wrecks during the race.

The Thursday before the Talladega cup race, it was announced that Alex Bowman, driver of the #48 for Hendrick Motorsports, would be ruled out for Talladega due to concussion-like symptoms. The concussion-like symptoms were due to a wreck that Bowman suffered early in the Texas cup race the week before. Bowman stated after the wreck that “That’s the hardest I’ve crashed anything in my entire life.” From the outside perspective, it seemed like a normal wreck that we see almost all the time. Bowman has also been ruled out for the Roval. Ever since then, more than before, safety with the Next-Gen car has been a very hot topic. Earlier in the season, Kurt Busch was ruled out after a qualifying crash at Pocono and has been out since. Busch was diagnosed with concussion-like symptoms, much like Bowman.

Both Denny Hamlin and Kevin Harvick have been very vocal leaders on safety with the new car throughout the week. Some drivers say that the sport has even taken a step back with safety. NASCAR has announced that they will be conducting crash testing with new parts for the 2023 season, to hopefully reduce these types of incidents. One part that NASCAR should look at is how stiff the new car is. The next-gen car has held up so much better than the older car in wrecks. The problem with that is that the car is not absorbing all the energy from the impacts of a wall or another car. The excess energy is being sent toward the driver, so the driver is feeling the impact more. Hopefully, NASCAR can find a resolution to these issues soon and be able to reduce the number of driver injuries to none.

Earlier Thursday evening, it was announced that Hendrick Motorsports had won their appeal of William Byron’s penalty from Texas. NASCAR would reinstate the 25 points that were docked from Byron after his incident with Denny Hamlin in Texas. This now bumped Byron back up above the cutline, and Chase Briscoe below the cutline. This coming weekend’s race at the Charlotte Roval is the elimination race for the round of 12. If previous races are any indications as to how this weekend’s race will go, it should be fun, exciting, and hectic. Ever since the roval debuted in 2018, it has been a hit with fans. Aside for Elliott, there isn’t a playoff driver who feels safe going into this weekend’s race. Most if not all drivers have commented on how they were hoping for a few more points to the cutline entering Sunday’s race.

12th. #48 Alex Bowman; -66 below the cutline, will be eliminated from the playoffs