Everything You Need to Know for UFC 254 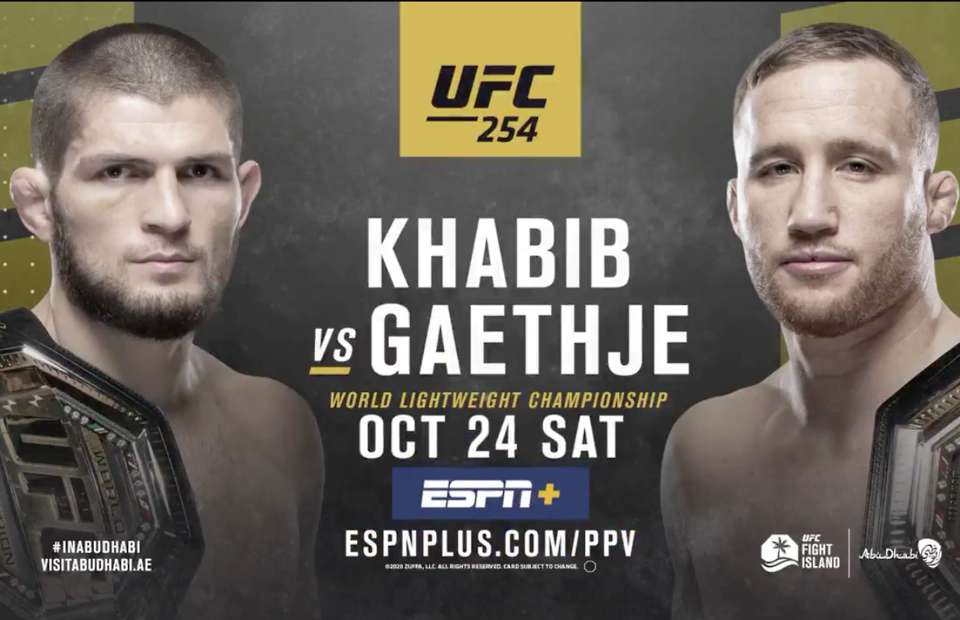 It’s officially fight week ladies and gentlemen. UFC 254: Khabib vs Gaethje is live this weekend on PPV. Below is everything you need to know for 2020’s most anticipated card.

The first is of course the fact he’s a NCAA division I wrestling All-American. It’s true that he’s hardly displayed it inside the octagon, but that’s because he’s never really had to. That changes this weekend.

Gaethje’s wrestling defense will be tested time and time again by Khabib, and how he holds up will determine the outcome of the fight. Undoubtedly, he and his coach Trevor Whittman have been drilling takedown defense all camp in preparation.

The second reason Gaethje is Khabib’s toughest test yet is his zombie-like durability and pressure. It’s an understatement to say it takes a lot to finish Justin Gaethje. The only two to ever do so were Eddie Alvarez and Dustin Poirier, but both occurred deep into the fight.

His fight versus Tony Ferguson perfectly exemplifies his non-stop forward pressure. When he does this against Khabib it will be interesting to see if they clash in the middle or if he forces Khabib to back peddle.

One last thing to note is Gaethje’s leg kicks. I think he’ll throw a couple early on with bad intentions to weaken Khabib’s front leg.

It’s almost a shame that Robert Whittaker vs Jared Cannonier will not be five rounds, but beggars can’t be choosers. If ‘The Killa Gorilla’ prevails, he will face Israel Adesanya next without question.

However, if ‘The Reaper’ reigns supreme, will he get his sought after rematch with the champ?

The way in which he lost hurts his chances. I’m not sure Adesanya would be very interested in a rematch right now. More importantly, I’m not sure Dana White is eager to run that one back at this point in time.

‘Stylebender’ has repeatedly expressed his intention of sharing the octagon with Cannonier. It’s an easy choice for everyone if he beats Whittaker. The Aussie will look to play spoiler this weekend.

This top-10 heavyweight match-up may not jump off the page, but it carries heavy implications for both men involved. The winner will get things back on track, while the loser will take a huge step back in their career’s.

Where would Alexander Volkov be if he avoided being knocked out in the final seconds by Derrick Lewis? Instead, he loses, gets an un-inspiring fight with unranked Greg Hardy, and gets dominated by Curtis Blaydes.

‘The Big Ticket’ had some serious momentum after emphatically finishing Alexey Oleinik in July of 2019. Unfortunately, his family underwent an unforeseen tragedy later that year. Bravely, he returned to the octagon last May, but he fell to Alistair Overeem.

The loser of Saturday’s fight will have dropped two straight and will be a long-way out of title contention. Meanwhile, the winner will right the ship and probably set up a fight against a top five opponent.

It’s almost been eight months since the ever-so controversial first meeting between Ion Cutelaba and Magomed Ankalaev. The immediate thought was to run it back as soon as possible.

I’m done expecting this fight to actually happen. I’ll just keep my fingers crossed until they’re locked inside the octagon.

UFC 254 is packed top to bottom with intriguing match-ups. Starting with the inaugural fight of the card, Joel Alvarez vs Alexander Yakovlev. The former is a submission machine, looking to add upon his win streak. The latter is a UFC veteran who hung around for fifteen minutes against current champ Kamaru Usman.

Moving along to a fan-friendly welterweight match-up between Alex Oliveira and Shavkat Rakhmonov. Oliveira accepted this fight on short-notice and he is a very difficult guy to fight in your UFC debut.

That’s exactly what the 25 year old Rakhmonov is up against this weekend. One of the top prospects in Asia is set to debut against someone in Oliveira who is going to bring the fight right to him.

Nathaniel Wood and Casey Kenney are set to square off in a match-up of rising bantamweights. Neither fighter has been given an easy path to this point. Honestly, the winner of this one could be a fun next opponent for Sean O’Malley.

Tai Tuivasa finds himself in the featured prelim facing the ‘Skyscraper’ Stefan Struve. Two years ago, Tuivasa was an undefeated rising star fighting former champion Junior dos Santos. He’s since lost three straight and is in desperate need of a win. He’ll come out firing and bring the brawl to Struve, which will make it a lot of ufn.

Islam Makhachev was supposed to take on Rafael dos Anjos, but unfortunately RDA withdrew after testing positive for COVID-19. The UFC was unable to find a replacement, forcing the fight to be scrapped.

Umar Nurmagomedov was scheduled to make his UFC debut this weekend versus Sergey Morozov. Sunday, it was revealed that the undefeated bantamweight has staff infection and will be withdrawing from the bout.

As of now, the UFC is attempting to locate an opponent for Morozov, but Umar Nurmagomedov’s presence will be missed on Saturday’s prelims.

Return to Back Sports Page this week for the latest news and updates on UFC 254. Staff picks will be released Friday!