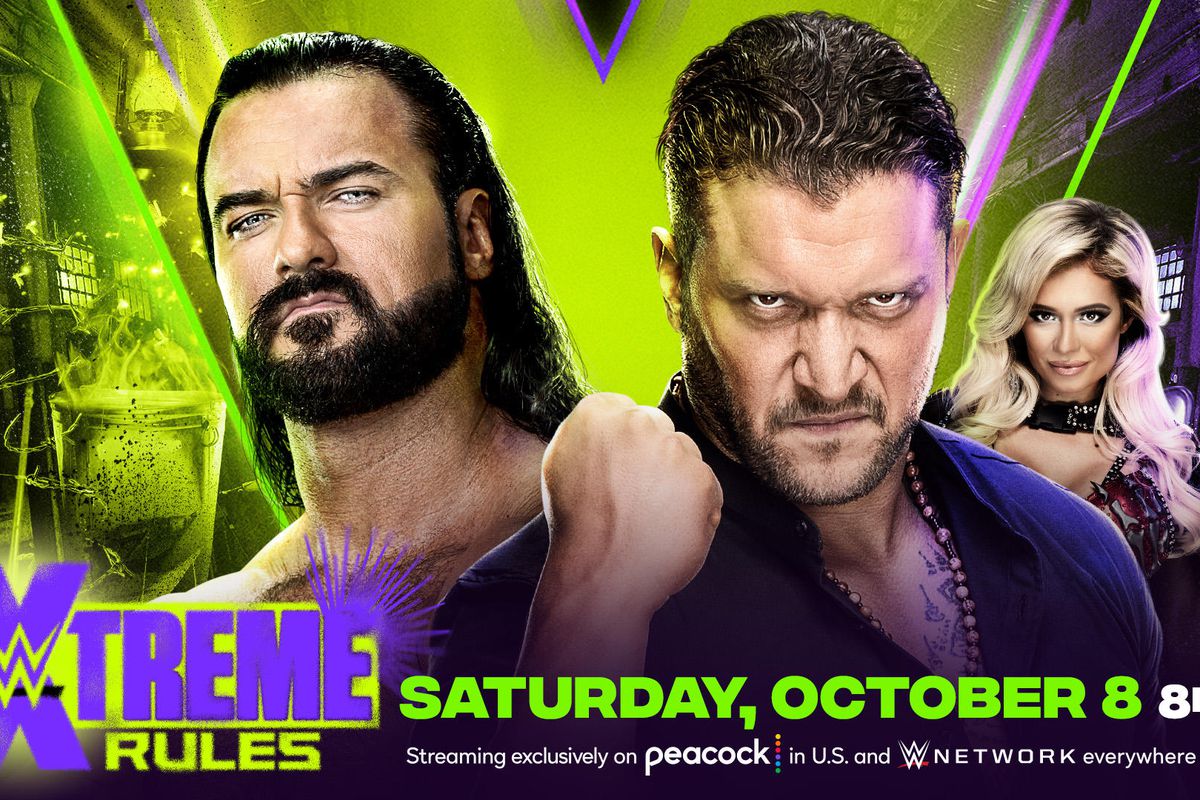 The commentators are Jerry “The King” Lawler, Booker T, Michael Cole, with Peter Rosenberg. Each gives their opinions and perspectives on the upcoming matches. The matches occur in the “City of Brotherly Love,” Philadelphia. Heads will butt, and bones will shatter, along with dreams and aspirations. The event takes place at the Wells Fargo Center with an attendance of 15,944 spectators.

The event begins with the “Donny Brook Match,” an all-out, no holds barred, free-for-all between Sheamus, Butch, and Ridge Holland versus ‘The Imperium,” consisting of Gunther, Ludwig Kaiser, and Giovanni Vinci.

The severe six men are standing, poised and ready for battle to commence standing toe to toe. Fists of fury launch! A cataclysm happens next! Props such as an oak bar and barrels are placed strategically outside the ring, ready to be incorporated into their dastardly deeds. The Imperium target Sheamus and pin Sheamus outside the ring against the oak bar. He is then picked up and slammed on top of the bar! It appears as though the Brawling Brutes are at a disadvantage. Ridge Holland hoists Vinci and Kaiser over his shoulders and throws them abruptly backward! The focus turns toward Butch. All three of the Imperium attack him! Sheamus summons his inner strength and goes after Gunther after he has dispensed with Kaiser and Vinci. Sheamus’s fury shows in his unwavering stare! He lashes out at Gunther after wrapping him up in the ropes. Butch and Ridge Holland decides to join in on the fun and lend a hand. Sheamus pinned Gunther until Vinci flew off the top rope to stop the count. Sheamus executes the backbreaker, followed by the Clover Leaf. A submission hold. Gunther is faced down and held up by Sheamus, bending his body into unbelievable pain. Kaiser smashes a shillelagh against Sheamus’s back!

Amidst the rubble of battered, brawling bodies, Sheamus and Gunther are foreheads to forehead, nose to nose. Each tries to best the other with their brutality. Finally, Sheamus has Gunther pinned until Kaiser and Vinci interfere yet again. Butch does a backflip off the barrels onto Vinci and Kaiser! Once again, Sheamus gets clotheslined by Gunther with a shillelagh! Down goes Sheamus! Butch and Holland. Arm themselves with shillelaghs beating down Kaiser and Vinci! Sheamus picks Gunther up with his back against his and slams him hard onto the commentator’s table! Holland and Butch hold down Vinci with his arms outstretched, making him an easy target. Sheamus seizes the opportunity, runs across the ring, and kicks him in the chin. Sheamus pins him for the three counts. The Imperium winning streak comes to an end quickly!

The next clash is for the women’s title match between Rowdy Rhonda Rousey and Liv Morgan. Rousey wears all black, while Morgan wears purple and neon green. Rousey attacks! Morgan escapes her clutches. Morgan grabs a baseball bat and is taken away by Rousey. Morgan knees Rousey in the face, then slides out of the ring. Rousey lifts the ring apron and traps Morgan in between it. Morgan reveals a fire extinguisher. She sprays Rousey with it. Rousey hits Morgan with a baseball bat. Morgan executes a flying dropkick to Rousey. She pummels Rousey! Morgan grabs straps and Rousey. She then throws her down the stairs. Morgan stomps Rousey in the corner.

Morgan sets up a table in the ring and waits. Rousey inflicts massive pain on Morgan after getting tied up in the ropes. Morgan sets up a steel chair in the corner of the ring. The chair gets knocked out of the ring. Morgan works on Rousey’s back with her fists. Morgan crashes the steel chair onto Rousey. It’s unsuccessful in trying to pin Rousey. Rousey has a stern, determined look in her eyes. In this match, anything goes! Morgan sets up a table again and places Rousey on top, flat on her back. Morgan climbs to the top rope and launches herself onto Rousey. Morgan tries to Powerbomb Rousey. Rousey applies the arm bar. Morgan is fading fast; lights out for Morgan! Rousey recovers her title as Woman’s Champion. She is still the “Baddest Woman on the Planet”!

The “Strap” match is the next bout between Drew McIntyre and Karrion Kross. I saw how Kross’s manager, Scarlett, interfered in McIntyre’s match at Clash at the Castle. At the very least, McIntyre should have given her a good shove through the ropes! Instead, McIntyre’s eyes burn through Kross. The hatred is unmistakable. McIntyre secures his wrist to the strap; Kross is hesitant and unwilling to do so. Kross attacks and knees McIntyre. McIntyre reverses and attacks Kross. The fight is taken into the audience. Kross throws McIntyre over the barricade. McIntyre reverses a Supplex! Kross still isn’t secured to the strap. McIntyre scoops Kross up and slams him onto the Edge of the ring. The strap is finally on Kross now. Scarlett distracts McIntyre and Kross takes advantage of it. McIntyre goes shoulder-first into the ring post. Kross stomps on McIntyre’s weakened shoulder. Kross gets clobbered by McIntyre. A chop t McIntyre’s chest by Kross. Into the commentator’s table, McIntyre is driven shoulder first! Then he gets flogged by Kross with the strap outside the ring b the post. Kross reels McIntyre in with the strap. A neck breaker by McIntyre is by an elbow smash. Toe to toe, each deal blows with their fists, followed by a whipping of the strap. McIntyre executes a DDT. Scarlett interferes with pepper spray and blinds McIntyre’s eyes. Kross ends up pinning McIntyre for the win. Again,  McIntyre should have laid out Scarlett.

The ladder match between the ‘EST” Bianca Belair and Bayley is about to begin. This match is for the Woman’s Raw Championship. The first ladder match for women in history! Both opponents drag the ladders into the ring. Bayley attacks Belair as she sets up her ladder. Bayley pulls Belair outside, followed by a ‘KOD”. Bayley launches Belair in the back of her onto the ladder behind her. Bayley gets kicked into the ladder. Belair slams Bayley on top of the ladder. Belair tries to scale the ladder multiple times unsuccessfully. Bayley does a flip, launching Belair into the ladder. Bayley slams Belair face-first into the ladder. She rams the ladder into Belair’s stomach. She is knocked out of the ring! The ladder is stretched across the ring to the barricade. Bayley does a flying leap off the top rope onto Belair, poised with her elbow to inflict damage. Bayley sandwiches Belair almost with the ladder, but Belair reverses it. The left arm of Belair is being favored. Bayley claws her way to the ladder, and Belair kicks her out.

Bayley pulls a foreign object out of her knee brace that appears to have a boomerang shape. Iyo Sky and Dakota Kai come out of hiding. Belair does a double “KOD” on them. She destroys them both! Belair holds her arm, writhing in pain. Bayley slams Belair face-first to the canvas! Bayley ascends the ladder, and Belair up-ends it! Bayley flies against the ropes. Belair drags herself across the ring. Bayley grabs Belair’s braid and yanks her into the ladder. Belair KOD’s Bayley as she held onto the ladder. Bayley’s jaw is compromised. Belair climbs the ladder to retain her title

The highly anticipated “I quit’ match between Edge and Finn Baylor rears its ugly head finally. If the rest of Judgement Day doesn’t interfere, it would be a miracle. The only way to win is to get your opponent to say, ‘I quit”. So, Edge begins his assault on Baylor. Edge executes the neck breaker. He traps Baylor in the corner and rakes his face grasping his nostrils. Baylor attacks Edge’s knee. Edge’s leg is on the rope, and Baylor kicks it down. Baylor works on Edges knee. Baylor applies a figure four leg lock. Edge tries to come back with a veageance1. He then reverses it. Back and forth, the position is changed. Edge sits up and smashes Baylor in the head. The Edge is trapped between the ring apron. He gets dragged to the table and gets thrown face-first into it. Edge slumps to the ground. Baylor applies a headlock to Edge. A sling-blade by Baylor, then Edge spears Baylor into the barricade of the timekeeper. The fight is carried into the aisle. Edge uses a Supplex on Baylor onto the hard floor. Baylor’s wrist is injured. Edge uses a hockey stick and inserts it into Baylor’s mouth as he did with a metal rod from a chair. Baylor gets launched into the concrete overhang. Edge gets his stomach rammed into the end of the metal railing on the stairs. A metal chair is jabbed into Edge’s midsection. Baylor looks under the ring and finds a steel chair. In the center of the ring, he stabs and hits him with the chair. “I don’t quit,” says Edge. Baylor deals out a succession of blows to Edge. Baylor does a leg lock on Edge. The cross-face move by Baylor is made. Edge has a reversal and throws Baylor face-first into the metal chair in the corner. Edge drives the steel chair into Baylor’s knee.

Judgement Day shows up! Edge spears them with one shot! Rhea Ripley handcuffs Edge to the top rope. Edge battles with one hand against Baylor, Priest, and Mysterio! Dominik dispenses with his father, Rey. Baylor gets ambushed by Beth Phoenix, Edge’s wife, with a kendo stick. She beats down the men as well as Rhea Ripley. Beth Phoenix beats her down! Edge gets the key to unlocking the handcuffs and takes out the trash, and Dominik does as well! Then he spears Baylor three times. The bottom bar is kicked out from a metal chair. Rhea Ripley takes out Beth Phoenix with brass knuckles. Edge says, “go to hell,” when he is asked to quit. Ripley sets up the metal chair under Phoenix’s head. Because his wife is in danger, Edge says, “I quit.” Ripley smashes the chair down on Beth Phoenix’s head! She lies motionless. It’s matches like this that are hard to stomach! There is too much injustice! I wanted to change the channel.

Next up, the ‘Fight Pit” match between Matt Riddle and Seth Rollins. The guest referee is Daniel Cormier, UFC Hall of Famer. No doors, no escape. Riddle initiates by striking Rollins with a series of kicks. He picks up Rollins and punches and drops kick him in his ear. Riddle hammers Rollins. The ref distracts Riddle, and Rollins takes advantage of it. Rollins gets his neck wrapped by Riddles’ legs. Rollins holds onto the fence and steps on Riddles’ neck. Rollins rakes Riddle’s face against the wall. Riddle beats the count. Rollins had kicked him in the face. Riddle gets taunted by Rollins. Rollins does a Supplex on Riddle and throws him into the chain wall. Rollins calls Riddle a loser. Riddle counters Rollins with an RKO! Rollins’s elbow smashes Riddle. Rollins goes for the “Stomp”.! The ref begins his count. Riddle miraculously climbs to his feet, then chases Rollins to the top of the twenty-foot cage. Riddle clings to the chain as Rollins tries to push him off. Rollins drives Riddle into the corner. Riddle does a pedigree to Rollins. Riddle does an RKO, and Rollins falls into the center of the ring. Riddle jumps from the top of the cage and lets his body weight impact Rollins below. The triangle is applied to Rollins; Riddle has Rollins locked up with his legs wrapped around him. Rollins submits.

Clash at the Castle